Home › the three › Three Ways To Know That Rama Is God

Three Ways To Know That Rama Is God

“The child of the protector of Koshala, who is the protector of the devotees, the most merciful one, Shri Rama, lives in the holy lake-like mind of Tulsi in the form of a beautiful and auspicious swan.” (Dohavali, 122)

Goswami Tulsidas says it. That should be enough. A true saint, a person whose kindness extends to the entire civilization of creatures, without making distinctions between friends and enemies, dedicates his entire life to worshiping Shri Rama, the incarnation of Godhead described in great detail, but never fully, in Vedic literature.

Tulsidas relies on the authority of Shri Hanuman, which adds even more credibility to the claim of Divinity. There are countless other saints and acharyas, spiritual teachers who lead by example. There are amazing deeds recorded by eye-witnesses, some of whom were adversarial.

“Being under the influence of illusion, I underestimated Rama and took Him to be a mere child. Thus I ran towards Vishvamitra’s sacrificial altar. With that, Rama released an acute arrow capable of destroying His enemies. Upon hitting me, that arrow forcefully threw me away to an ocean one hundred yojanas [eight hundred miles] away.” (Maricha speaking to Ravana, Valmiki Ramayana, Aranya Kand, 38.19)

There is so much evidence already, but from studying certain aspects of life around us we can get additional proof. This is a quick way to establish a firm belief in God, which is a necessary first step for receiving His endless mercy, which has been available since the beginning of time.

1. He makes those things we need readily available

The new smartphone. The new automobile. The new television. The newly brewed adult beverage. If you have an excess of cash, there are many ways to relieve the burden. Spending money shouldn’t be a problem, as you can find something ordinary that has a higher end model. You could spend hundreds of dollars on a drink if you wanted to.

We know that Rama is God because He makes those things which we actually need readily available. That is to say water, grains, fruits, and sunlight are in great abundance compared to wine, liquor, gambling houses, and brothels. A simple dwelling, to the lowest point of something like a cave, is usually not difficult to find.

2. He makes those things we need relatively inexpensive

Correspondingly, those objects in high abundance, which are of actual necessity, tend to be lower in cost. Water is cheaper than beer, at least in most places. The apartment is less expensive than the large and spacious house. The second-hand car is cheaper than the brand new luxury vehicle.

There is a correlation to spiritual life, as well. Goswami Tulsidas presents the wonderfully poetic and beautiful Ramacharitamanasa. This is a lengthy work composed in Hindi that describes the life and activities of Shri Rama. It is the holy lake of Rama’s deeds, one that can live in the mind of the devotee.

To get this work in its original form is not very difficult. It is readily available and relatively inexpensive. At the same time, it is the most necessary object. God’s association is what mankind needs the most. They already have it, but under the illusion of ignorance they forget.

3. He adjusts the outward appearance of the individual based on the need for protection

We can take the infant as an example. They require the most help. They are completely innocent. No rational person is angry at the infant for anything, as even if they supposedly do something wrong it is not with ill-intent. The infant can’t even feed itself. It requires constant attention.

Rama is God because at this most important time He adjusts the outward appearance in a way to trigger an outpouring of affection. The infant is so cute that the adults can’t help but offer assistance. In some families there is competition to see who can offer more service, who will spend more time with the baby. The same innocent appearance is lacking in adulthood, which is okay since there isn’t as much reliance on others to go about life. 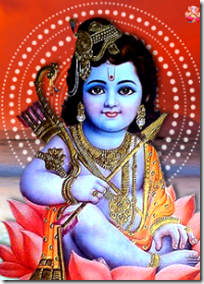 Rama appears on earth every now and then to clear doubts. He, too, shows an attractive form in order to evoke the service mentality from others. He doesn’t require anything from anyone, but He accepts service nonetheless, as it pleases both the giver and the recipient.

Through this body given.

Rama providing what we need,

That only can be God the meaning,

Favor towards believer’s side leaning.

Like Loading...
‹ Two Ways Krishna Reminds His Parents Of A Higher Power
Four Objects From Classical Warfare That Aren’t Enough To Overcome God ›