Home › conversations › Is It Possible To Teach Someone To Be Devoted

Is It Possible To Teach Someone To Be Devoted

“Those who are not devotees can never achieve the benefits of devotional service. For them the subject of devotional service is always very difficult to understand. Only persons who have dedicated their lives unto the lotus feet of the Supreme Personality of Godhead can relish the real nectar of devotion.” (The Nectar of Devotion, Ch 34)

Friend1: You never win if you never try. You can’t succeed unless you are willing to risk failure. You miss one hundred percent of the shots you don’t take.

Friend2: Throwing a little Wayne Gretzky in there?

Friend1: I’m using these famous quotations and sayings as a way to get somewhere.

Friend2: You realize there is a slight flaw to the last one?

Friend2: Yes. Sometimes you’re making a pass and it ends up getting deflected into the net as a goal.

Friend1: That’s true, but I think you’re supposed to understand the spirit of the statement.

Friend2: I do, but I’m just saying it’s not entirely accurate. A pass is a shot that is not taken. Since sometimes that goes into the net, it invalidates the one hundred percent statistic.

Friend1: Okay, but the idea is that you have to be on the ice in order to score. Would you agree with that?

Friend2: Statistically, there is another exception, which is admittedly a rare occurrence.

Friend1: How does this work? I’d love to hear.

Friend2: They credit the goal to the last person on the offense who touched the puck. You could dump the puck into the offensive zone and head to the bench for a line change. The defense then accidentally passes the puck into their own goal.

Friend1: Ah, so you have scored a goal without being on the ice?

Friend1: Okay, but you were on the ice at some point. You are playing the game. You can’t do these things while lying on the couch at home.

Friend1: And so I’ve heard something similar with respect to spiritual life. Something to the effect that you can’t get the benefits of devotional service without being a devotee.

Friend2: Sure. It’s pretty easy to understand. The amazing feeling of bliss, transcending the strict limitations of time and space found in the material world, elevation to a higher consciousness – these aren’t things you can just make payment for and receive.

Friend1: As is seen with demigod worship.

Friend2: Right. There isn’t an automatic retrieval. It’s all about consciousness, and specifically devotion within that consciousness. You have to feel it. Going through the motions, following every recommendation literally might provide ancillary benefits, but everything belonging to the devotees won’t be there.

Friend1: Something like licking the bottle of honey from the outside.

Friend1: Here’s something to consider, though. Is it possible to teach someone to be devoted to someone else?

Friend1: I have love and affection for my child. No one had to teach that to me. The same applies towards my parents. My friends. I’m not practicing devotion to them. There is no higher benefit I am seeking. The relationship is just there.

Friend2: No, I get what you are saying. The mindset is basically spontaneous at this point.

Friend2: The thing is, have you always known your child?

Friend1: Not before they were born.

Friend2: So that means that the specific affection didn’t exist before and then later on it did.

Friend1: Okay, but I wasn’t intentionally trying for it. No one taught me.

Friend2: Well, don’t get hung up on that angle, here. We say it’s teaching to tell people to avoid the four pillars of sinful life. We provide instruction to chant the holy names on a regular basis: Hare Krishna Hare Krishna, Krishna Krishna, Hare Hare, Hare Rama Hare Rama, Rama Rama, Hare Hare. What actually is going on is that a person is reconnecting with someone they have known for a long time. Rather than teaching devotion, it is more instructing on how to remove distractions and focus better.

Friend1: Which could apply to any relationship?

Friend2: Look at marriage counseling and parenting books. The aim is to help the relationship, to remove distractions and bad habits that cause issues. Bhakti-yoga as a discipline is exactly the same way. If you follow jnana-yoga, religion as mere sentiment, worship out of fear of eternal damnation or other such paths, there are hints of devotion, but the full benefits of bhakti-yoga will remain elusive.

Friend1: So better to be taught how to connect with God the person? 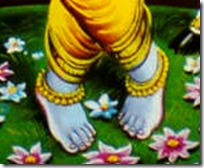 Friend2: Yes. Even if there is zero devotion right now, at least try to apply the principles. Implement the practical application and see for yourself if things turn around. Success is very difficult, for after many lifetimes does a person know Krishna in truth, but that doesn’t mean that an attempt shouldn’t be made.

After many lifetimes success to reach,

But not a waste devotion to teach.

Already in that direction choosing.

Since soul to God linked forever,

To be truly separated never.

As natural as parent the child to meet,