“Hiranyakashipu advised his assistants: My dear demons, give complete protection to this boy at the guru-kula where he is instructed, so that his intelligence will not be further influenced by Vaishnavas who may go there in disguise.” (Shrimad Bhagavatam, 7.5.7)

Meat eating is normal. It’s what everyone else does. Gambling? Perhaps every now and then. You certainly don’t want to get addicted. The same goes for intoxication. Nothing wrong with enjoying an adult beverage here and there, like when celebrating a special occasion.

Sex life? How else are people supposed to enjoy? Do it responsibly, so that you don’t have to kill the child in the womb afterwards, but there is no harm in indulging a little too much. The main emphasis is to follow the religion inherited from the parents. Not that strictly, either, just acknowledge. There used to be rules and regulations, going to church and the like, but the aim now is to avoid eternal damnation.

It’s not surprising for a person growing up in such an environment to meet opposition when they take up bhakti-yoga, devotional service. The four regulative principles alone are foreign, as upon first glance they seem like torture. Then there are the related practices of chanting a mantra with Sanskrit words, worshiping a statue in a temple, and reading books that constantly focus on birth and death.

Wary parents of atheistic inclinations or those entrenched in blind faith might take extreme measures to change the behavior of their children, to move them away from worshiping a deity of a bluish complexion, who is always smiling and carrying a flute. They may try what is called “deprogramming,” which is a sort of brainwashing technique. Force the person out of devotional service and back into material life. 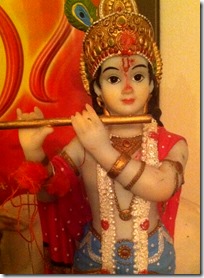 From the Shrimad Bhagavatam we learn that the practice isn’t an invention of the modern day. A powerful king once tried this with his own son.

Hiranyakashipu really had no religion. He had used elements of dharma to ascend to power, but that was more a business transaction. Worship a specific personality, ask for stuff, get what you want, and then move on. The only distinction in this case was that Hiranyakashipu asked for the world and basically got it.

He didn’t worship an ordinary person, either. Lord Brahma is the creator. Known as Vidhata, he takes the three base ingredients of goodness, passion and ignorance and creates the different species we see. There are many we haven’t seen, either, and the Vedas cap the total number at 8,400,000.

Hiranyakashipu became the most feared ruler as a result of Brahma’s grace. There was a son, named Prahlada, who was to follow in the father’s footsteps. Let there be a dynasty of atheistic rulers, known in this case as Daityas, who are one of the aforementioned species. Their distinction is that they are asuras, or bad guys. It’s in their blood to be antagonistic towards the concept of God and devotion to Him.

The problem here was that somehow Prahlada was a devotee from birth, and a pure one at that. Not just worshiping the personal God from time to time, to ask for stuff, Prahlada cast aside interest in material advancement right away. He was prepared to make the human birth worthwhile, to no more swim in the ocean of birth and death.

Hiranyakashipu’s first effort could be called programming; the deprogramming would come later. Prahlada went to school. He was to learn statecraft. He was to become expert in the four principal means of diplomacy.

2. Telling the teachers to try again

The father one day asked what Prahlada had learned. Specifically, he wanted to know what was the best subject. Prahlada gave a reply that had nothing to do with what was taught in school. The boy focused on the need to make the human birth successful and how going to the forest was superior to material accumulation. There a person can better meditate on the lotus feet of the Supreme Lord.

The father viewed Vishnu as the mortal enemy. Vishnu is the personal side to the Divine, a way to go beyond the abstract, to no more have to speculate as to the features and nature of the being who is the origin of everything. So angered by the response, Hiranyakashipu demanded that the teachers go and make the boy’s mind right. He essentially gave the order to deprogram.

3. The threat of lethal punishment

The irony was that not only did the instruction from the teachers not work, Prahlada became a sort of teacher himself. During recess the other schoolchildren would gather around and listen to Prahlada give a discourse on the science of self-realization. The boy had learned while within the womb, from the celebrated Narada Muni. He retained the knowledge upon taking birth, and he wasn’t shy in sharing it with others.

Hiranyakashipu again asked what was learned, and this time Prahlada described the nine processes of devotional service. Deprogramming from the teachers obviously hadn’t worked. The next resort was lethal punishment. Not really a threat, but more a way to get rid of the nuisance. Physically remove the problem. There was just one source of devotion to Vishnu in the kingdom, and killing Prahlada would remedy the situation.

Just as Vishnu is without death, so the devotion of His most cherished servants remains intact. Prahlada could not be killed. The programming and deprogramming efforts were thwarted, all by some words of wisdom delivered to the boy before he was even born. The great physical strength of the atheistic father was no match for the meditation in devotion of the young son.

Plan of lethal force to apply,

But failure no matter how much to try.

The boy who from Narada Muni received,

Within womb after parents to conceive.

Program first and then later again to try,

On family teachers the king to rely.

No success whatever the case,

Devotion no teacher could erase.

Like Loading...
‹ No Liability In The Court Of Divine Opinion
How Are The Disc And The Club Beautiful ›