Four Reasons Brahma Did Not Decline To Help Hiranyakashipu

“Lord Brahma said: O son of Kashyapa Muni, please get up, please get up. All good fortune unto you. You are now perfect in the performance of your austerities, and therefore I may give you a benediction. You may now ask from me whatever you desire, and I shall try to fulfill your wish.” (Shrimad Bhagavatam, 7.3.17)

He’s a bad guy, after all. The other side is the embodiment of sattva-guna, the mode of goodness. The species are created by him, giving meaning to the name Vidhata. Goodness, passion and ignorance – combine in different proportions to generate the 8,400,000 different species.

Brahma was there at the beginning. He received transcendental wisdom through the heart, after properly meditating. Empowered by Vishnu, he subsequently went to work creating. He is the original father of every living being. Every person is thus related to him, and by extension to one another.

With such an amazing pedigree, how did Brahma not foresee the effects of his boons? Hiranyakashipu worshiped properly, but there was ill-intent. There was a score to settle, revenge for the death of his brother Hiranyaksha at the hands of Vishnu in the incarnation of a boar. 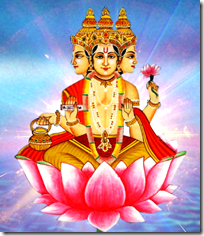 Brahma agreed to give Hiranyakashipu whatever was asked because of the role. Brahma is a kind of deputy, a manager of the material creation. The manager receives his tasks; duties appointed by a higher authority. If there is good or bad that results, the consequences attach to the top executive, not the deputy.

Therefore Hiranyakashipu was able to procure amazing boons like immunity from death in so many situations. Immortality was off the table since Brahma himself doesn’t possess it. Despite living for an unfathomable length of time, there eventually comes an end. The soul inside travels to a different body.

Hiranyakashipu knew what he was doing. Vishnu is the origin of both material and spiritual worlds. He is the personal side to God, the detail behind the abstract. He is the source of the brightest light that is Brahman. He is the person from whom the expansion known as Supersoul comes.

The king could have worshiped Vishnu and received immortality and whatever else he wanted. The problem is that Vishnu is not obliged to give anything to anyone. A person can try to worship him in the manner of a business transaction, but success is not guaranteed.

With Brahma and other demigods, sufficient payment is the only requirement. That is in the form of austerity and penance, and Hiranyakashipu reached a level that deserved appreciation. Catching Brahma’s eye is not easy, but Hiranyakashipu knew how to do it.

3. Material benedictions don’t mean that much

The subsequent terror and destruction could have been predicted. It didn’t take a genius to know that Hiranyakashipu was a Daitya by both spirit and birth. His kind were not inclined towards real dharma. They didn’t appreciate righteousness. Surely they expected to be respected by others, though not extending the same in their dealings.

Brahma and other demigods are not implicated in the use of the boons they hand out because material accumulation is not really that important. It is an illusion to consider fame, power, strength and wealth to be the height of an existence. It is the work of maya, fooling the individual into taking something temporary as real and permanent.

4. A higher purpose to fulfill

Hiranyakashipu‘s example is recorded in shastra for a reason. It is an example of the heights to which a person can ascend in a material mindset. Despite having the entire world afraid of him, the now-powerful king was not satisfied. His senses were not under control, and so the mind was like a chariot trying to travel in many directions simultaneously.

There was a higher purpose to fulfill. From receiving these benedictions, the king created a situation that warranted a Divine appearance. It was a special form. Not the boar that dealt with his brother previously, this time it was a half-man/half-lion. While annihilating the miscreant king, the saintly son named Prahlada was protected. Brahma’s grace was a catalyst to this amazing pastime, and so the deputy shares in some of the accolades of that celebrated moment.

Why Brahma to demon to give,

So that terrorizing force to live?

Could not the future foresee?

Since in mode of goodness is he.

Material not so important in end,

Like Loading...
‹ What Is The Ultimate Goal Of Life
Four Aspects Of Bhakti life That Are Anathema To Popular Religions ›