The Power Of Good Over Evil

“My dear lady, on the journey leaving from this place, none of the residents from Lanka have the power to be able to follow me.” (Hanuman, Valmiki Ramayana, Sundara Kand, 37.26)

One of the risks with committing a crime is that the same can be returned to the perpetrator, like a boomerang effect. If both sides were living in peace before, the initial violation can start a chain reaction of retaliatory measures. This is especially evident in what is called a “prank war.”

There is something similar in the game of baseball. For whatever reason a certain pitcher is upset at the other team. Perhaps they made a disrespectful gesture. Maybe there was something done the previous time they played, which could have been a season ago.

The pitcher decides to take justice into their own hands. They intentionally throw a fast pitch aimed at the body of the batter. A baseball travelling at upwards of one hundred miles per hour striking an unprepared player leaves a painful mark. 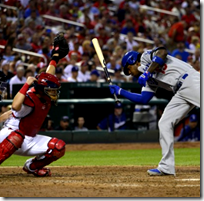 The risk with travelling down this path is that the team being struck has every chance to retaliate. They have their own pitchers, due to take the mound in the subsequent inning. Those pitchers have justification to throw at the opposing team’s hitters. If the pitcher who fired the initial salvo happens to be batting, he might bear the brunt of his bold action.

A long time ago the leader of Lanka never thought that someone would have the ability to reach his island. Ravana took away a princess using questionable tactics. He did not fight fairly for her. She was wedded to the prince of Ayodhya, Shri Rama. Ravana was more than aware of Rama’s capabilities on the battlefield. There was firsthand experience of just how much damage Rama could inflict when defending Himself from enemy attackers.

Ravana struck first, though in his perverted mind he thought that Rama was the offender. Ravana’s sister had previously propositioned Rama in the forest of Dandaka. When she was declined she decided to charge after Sita. Rama’s younger brother Lakshmana defended Sita and maimed Ravana’s sister in the process. The leader in Lanka decided to use that as justification to both attack with a massive army and then subsequently employ deception to steal Rama’s wife.

As there was a flight over an ocean and an initial clandestine mission, the same was returned to Ravana. Rama’s trusted messenger Hanuman travelled to Lanka via the aerial route. He didn’t need a special vehicle. He simply jumped from a mountaintop and swiftly coursed through the sky. After reaching Lanka, Hanuman changed his form so as to remain undetected.

In the above referenced verse from the Ramayana, Hanuman is proposing to Sita that they return together to Rama’s side. Hanuman will again fly through the air, but this time carrying a passenger on his back. There is no reason to worry, since no one in Lanka has the shakti, or power, to follow him.

The side of good not only had the ability to retaliate, but they could enforce the laws of dharma in a way that even the most powerful of the bad could not mimic. Sita declined the offer, as she would wait for Rama to come and rescue her. Hanuman’s mission was only to find her anyway, so there was no insult.

On the way out of Lanka, Hanuman first set fire to the place. It would stand to reason that someone would follow the devoted messenger back. Find out from where he came. Learn of the location. Measure up his abilities. Yet no one in Lanka could do this. They were small in comparison to the strength of devotion in the monkey messenger.

That power came directly from Rama. The Supreme Lord is the ability in every person. He is the reason someone like Ravana can rise to power. In those instances there is no intervention in the exercise of ability. That is the meaning to free will.

“But those who worship Me with devotion, meditating on My transcendental form-to them I carry what they lack and preserve what they have.” (Lord Krishna, Bhagavad-gita, 9.22) 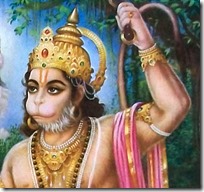 When the ability is used for Rama’s service, for pleasing God, there is personal intervention. The neutrality ends and the Supreme Lord brings to the devotee what they lack and preserves what they have. Ravana, on the other hand, could never get the necessary protection he desired, and soon everything he owned would be destroyed.

Everything worked for hard and toiled,

Plan of protection by monkey foiled.

Who via the aerial route came,

In way Ravana previously the same.

For self-defense the stature grew.

All for Sita-Rama such risks taking,