Four Things That Could Go Wrong Approaching A Pretender Guru

“A person who is wallowing in carnal pleasures and material comforts, who is confused about the human goal of life and is devoid of bhakti, and who poses as a guru, such a depraved charlatan must be rejected.” (Mahabharata, Udyoga-parva, 179.25)

“A guru is compulsory. Not only do you need to approach a spiritual master, but you have to obey their commands. Render service and inquire submissively. Do not be challenging. That does not mean there are no doubts. Bring them to the table, but like you would in a classroom setting, where the teacher is the established authority figure. You can’t achieve perfection by consulting the books directly, as they were compiled thousands of years ago. You don’t know how to transition the lessons to the modern day, how to adjust for time and circumstance.”

These recommendations certainly are valid and based in authority. The Bhagavad-gita makes specific mention of the need to approach a bona fide spiritual master. That occurs within the context of a discussion between teacher and disciple. The example is set and the instruction is there for future generations to follow.

At the same time, there are some risks. The problems arise when the guru is not qualified. By following such a person in the aforementioned submissive attitude, things can go wrong, and rather quickly.

They are the priestly class. The guru likely comes from this group. Not armed and ready to defend. Not always thinking about business and how to increase the profit margin. Not engaged in manual labor, helping the other classes.

The brahmanas are supposed to be the brains of society. More than just an intelligentsia, the wisdom is based on ancient teachings passed on in a chain of disciples. This is called parampara, and a brahmana who appears within such a succession is likely safe to approach.

Yet in one well-documented incident, they were fed human flesh. The host was innocent enough. He followed the guidance of a supposedly saintly person he met in the forest. This was actually a meeting between two kings. The person living in the forest was formerly vanquished by the visiting monarch. However, only the wandering king did not properly recognize his former enemy. The king took the man to be saintly, accepting him as guru.

On that fake guru’s advice the king hosted brahmanas and fed them nicely. The only problem was that the food was contaminated with human flesh. This was again the work of the rival king. Brahmanas typically don’t eat any meat. If they do partake, such as in previous ages, the flesh is of animals killed during yajna, or sacrifice. There is no such thing as indiscriminate satisfaction of the senses in true spiritual life. Eating and sleeping are limited to as much as needed and no more.

2. Get cursed to take birth as a Rakshasa

Needless to say, when the brahmanas found out what was in the food, they were not too thrilled. The host, King Pratapabhanu, was cursed to take birth as a Rakshasa in the next life. The idea is that if you want to serve human flesh to us, why not assume a species that is known for man-eating? That punishment is befitting.

This is a curse in more ways than one. The species is sinful by nature, and compared to a saintly king the next life is a major downgrade. It generally means that a person is farther from liberation, which is the end to the cycle of birth and death.

3. Have your faith in a genuine spiritual path ruined

The punishment was clear for Pratapabhanu, and he realized his mistake. There would be birth as a Rakshasa, who would be named Ravana. There was liberation anyway, as the Supreme Lord Rama would be the subsequent instrument of death. The real-life historical incidents serve to show the dangers of the sinful path and how purification can come from consciousness of God.

In other cases, approaching a pretender guru can shake a person’s faith in the purported goal of life. That is to say they may stop believing in God and any type of organized religion altogether. While the bona fide teacher can give you the world, rescuing you from the ocean of birth and death, a similar meeting but with a pretender can have you do a 180, running in the opposite direction. This is tragic since it keeps a person further away from the finish line of not having to take birth in the material world again.

Of course the guru will be too cowardly to take any action themselves. The unsuspecting disciples will be drafted for the job. If they follow blindly, not applying any discrimination, they could be implicated in criminal behavior. Their lives can be ruined, all to protect someone who wasn’t worth protecting to begin with.

For these reasons discrimination is important. In ideal circumstances, the guru and disciple study each other for several months before entering into a teaching relationship. The idea is to see if the spiritual teacher is indeed in control of their senses and dedicated to the Supreme Personality of Godhead. The guru also observes the disciple, to see if they are serious about going down the path of real dharma, of serving with a purpose.

“The humble sage, by virtue of true knowledge, sees with equal vision a learned and gentle brahmana, a cow, an elephant, a dog and a dog-eater [outcaste].” (Lord Krishna, Bhagavad-gita, 5.18)

Does the guru insist on payment before rendering services of instruction and revealing of sacred mantras? Do they look at everyone equally, seeing the spiritual equality mentioned in the Bhagavad-gita? Are they free of attachment to sinful behavior, like intoxication and gambling? 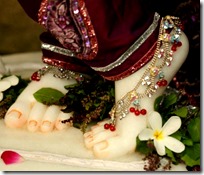 The risks are there that the teacher may not be what he presents himself as, but such cheating takes place already in various aspects of society. Just because there is a bad experience doesn’t mean that spiritual life should be abandoned altogether. In one way the bad make the good look even better. When the real thing is found there will be even more appreciation, and the chanting of the holy names can then take place unimpeded: Hare Krishna Hare Krishna, Krishna Krishna, Hare Hare, Hare Rama Hare Rama, Rama Rama, Hare Hare.

Books only not addressing.

Someone to circumstance and time,

Teaching real identity, yours and mine.

But risk when pretender to find,

Loss of faith or complicit in crime.

Still on with search better to live,

Since true servant Supreme Lord to give.