It’s your first day at the new job, one that took a while to land. In truth, it was through someone you knew. Graduating college isn’t a guarantee for employment. It was a struggle to find something, but the wait was worth it. It looks like you will enjoy working here.

They give you something complex to work on. No problem. The day should be occupied in a meaningful way. Challenge the brain. Exercise the muscle that wasn’t utilized much in the past year. Video games and television show marathons don’t really count. This is the time to show your stuff, to prove that the company didn’t make a mistake in hiring you.

The task is complex, but you are making progress. Little by little you are getting closer to a solution. Then tragedy strikes. A few minutes before the day is over, after everyone else has left, your computer suddenly crashes. Nothing you could do; a total freeze. Perhaps since you’re the new guy they gave you a hand-me-down, a machine that was on its last legs. 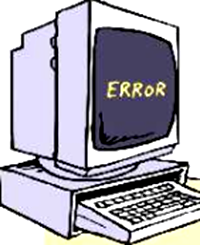 The issue here is that you didn’t save your work. Everything was done in a specific window of a program. Since the whole computer had to be rebooted, you lost everything. There was no auto-save feature. What are you going to tell the bosses the next day? This is something like the “Dog ate my homework” excuse used by students in school. Lack of diligence is unacceptable in the real world.

There may be the fear of something similar occurring in spiritual life. As the origin of all religions and traditions, the Vedas reveal the most about the individual, who is spirit soul, separate and apart from the body, which is temporary. Matter is not attached to us, though we think otherwise. We can survive in a different body type. Proof is in the fact that the body is constantly changing. We are no longer living in the mother’s womb. We are no longer small enough to require a special seat placed in the car.

An adult today, our identity has not changed. We are the same spirit soul, but living in a different kind of body. This principle is not difficult to understand. Now extend the same idea to death. The soul moves on to another body. A person who is dhira, self-realized or sober, is not bewildered upon learning this.

The Bhagavad-gita summarizes Vedic philosophy, and a key teaching comes across with respect to reincarnation. Specifically, there is a way to stop it. The basis is consciousness. Be conscious of a specific person, not just a concept, and the travel after quitting the body will be to a place where birth and death do not take place.

This achievement goes by different names. Moksha. Mukti. Some call it nirvana, but it’s not really the end. Rather, liberated life begins. This exit from the cycle of birth and death can be translated as liberation or the liberated state. There is union of two souls, the individual and the Supreme. It is a connection, known as yoga.

Yoga can take place prior to death, but then it can break again. That is to say a person can be connected in consciousness to the Almighty but then fall back into illusion, also known as maya. The worry is that I will practice spiritual life to the point of detaching from the body, liberated while living in it, but then revert back to the ways of ignorance so that the pure consciousness is not there while quitting the body.

What happens, then? Is it like the office example where all of my work is lost, for good? Will I have to start over from the beginning? The same risks. The same struggle. The same attention to rules and regulations, to reach a destination that I might not be strong enough to maintain. Perhaps this path of yoga is not worth it.

Shri Krishna, the Supreme Personality of Godhead, addresses the concerns. He says that there is no loss in the effort of real yoga. Whatever progress is made gets maintained. If the consciousness is not made pure in one lifetime, in the subsequent birth the circumstances are favorable for continuing. A household blessed by Shri, the goddess of fortune, helps. Or perhaps you learn about yoga right from the beginning, appearing in a family of clean and pure people, shuchi. 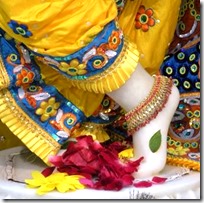 The idea is that only in bhakti-yoga, devotional service, is there insurance from total loss. No other paths offer this guarantee, since everything promised is materially tainted in some way. As connection with God is the original and constitutional position, any effort made towards returning to it is backed and supported by the unflinching arm of the Supreme Lord, who once held the massive Govardhana Hill for seven straight days on the pinky finger on His left hand, while in the visual manifestation of a boy.

At seat with computer aligned,

To work on tasks assigned.

Failure at crashing machine when,

Not saved so progress lost then.

That possible in spiritual life the fear,

But maintained progress, at same spot to appear.

Like Loading...
‹ Three Kinds Of Payback Ravana Received From Hanuman
Five Ideas Where Speculation Is Resolved Through An Authority Figure ›