“The yogi should fix in his heart the activities of Lakshmi, the goddess of fortune, who is worshiped by all demigods and is the mother of the supreme person, Brahma. She can always be found massaging the legs and thighs of the transcendental Lord, very carefully serving Him in this way.” (Shrimad Bhagavatam, 3.28.23)

They have done so much for me; that must be acknowledged. They could deliver when I could not. They brought to me what human effort, paurusham, could not. I tried my best to go it alone, but it didn’t work. I failed miserably and suffered great lamentation afterwards. I felt sorry for myself, for having failed.

The benefactor came through for me. It didn’t take much. Just some standard devotional practices. Contemplating. Meditating. Reciting prayers. Simple offerings like water and leaves. The turnaround was quick. There really is something to the traditions descending from the Vedas.

Proof of the potency of the benefactors is evident everywhere, but what might not be so obvious is that they are empowered by a higher being. The benefactors have their own system of worship, and some of the most important personalities set the example.

He is the creator. Taking the three base ingredients of goodness, passion and ignorance, he goes about creating the different kinds of suits for the conditioned spirit soul to inhabit. The allotted time is fixed; based on a variety of factors like karma and daivam, work and destiny. The same soul travels to different bodies in what is known as transmigration.

Brahma is known as the self-born one, svayambhu. This is because he doesn’t have the typical mother and father. He emerges from a lotus stem growing from another lotus-like area. Interestingly, the origin is a navel, which is found on the body of Narayana, who is also known as Vishnu. Since Lakshmi is the wife of Vishnu, it is sometimes described that she is Brahma’s mother, as well.

Vishnu gives Brahma the potency to create. There is meditation involved; it is not like Brahma figures out everything on his own. The one with four heads, who lives for an inconceivably long period of time, who sees many days and nights in human calculation, who gives birth to the entire variety of species, worships Vishnu.

As Brahma is the creator, Shiva is the destroyer. In many places he is described to be the giver of liberation, which he offers to those who die in his holy city of Kashi. The method of delivery is the sound of the holy name of Rama whispered into the ear of the departing soul. That name is non-different from Vishnu; it is the particular form of Godhead worshiped by Shiva.

Such a powerful personality, who is easily pleased, who is the husband of the material energy personified, who has the most pious son named Ganesha, who can make kings out of the least fortunate in the world, whose amazing bow is passed down in the family of King Janaka, worships Vishnu with love and devotion.

He is one of many sons of Brahma. Narada’s distinction is that he travels the three worlds. His residence is not fixed. Though the cause is a curse from Daksha, to Narada the situation is a blessing. The inability to remain in one place for too long enables him to spread the glories of Narayana to different areas of the world. His disciples are some of the most revered saints of the Vedic tradition. He inspires devotion, and his inspiration is Vishnu.

She is the goddess of fortune. Around the time of Diwali each year, her image is prominent in places of worship. She appears next to Ganesha. The idea is that one person removes obstacles and the other bestows blessings. Let there be prosperity and good fortune for those devoted to her.

Despite controlling the wealth of the world, Lakshmi is fully attached to the Supreme Lord. Images depict her massaging the feet of her husband, while He lays down in rest. The idea is that Vishnu does not have to struggle to create, maintain and annihilate. The most amazing work is accomplished with little to no effort. There is the association of the most beautiful goddess, who is the embodiment of chaste behavior. 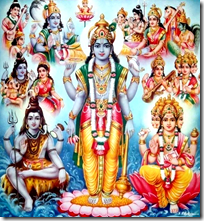 If even such powerful personalities worship Vishnu, then who are we to make new forms of religion? Worship of the demigods is bona fide and recommended in many places, but the wise person investigates further, to see if anyone is supplying the benefactors. The swallowing of poison, the distribution of huge sums of wealth, the creation of the species, and travelling to all parts of the three worlds cannot be imitated, but the example of pure devotion to God the person can be followed by one and all to attain the eternal association of Vishnu.

Brahma from the lotus navel born,

Mahadeva god of lust to scorn.

Lakshmi by Vishnu’s side to see.

Benefactors more than my fortunes to save,

Ideal example from way to behave.

That worshiping always person one,

And with other attachments none.