How Is It Possible For The Greatest To Expand Into Everyone

“As the Supreme Personality of Godhead, You have taken birth from my abdomen. O my Lord, how is that possible for the supreme one, who has in His belly all the cosmic manifestation? The answer is that it is possible, for at the end of the millennium You lie down on a leaf of a banyan tree, and just like a small baby, You lick the toe of Your lotus foot.” (Shrimad Bhagavatam, 3.33.4)

Friend1: God is great. That is the general idea.

Friend2: Of the believers.

Friend1: Sure. Even the non-believers, if they were to think of what the concept of God is, greatness would likely be the first vision.

Friend2: Better than everyone else. Exhibiting superior ability in every area where an exercise can make a determination.

Friend1: Staying above, in the heavenly region, looking down on everyone else.

Friend2: Situated in the highest position.

Friend1: The Vedas even confirm this to a degree. There is the concept of Vishnu living in the spiritual land of Vaikuntha.

Friend2: The permanent heaven, different and distinct from svarga-loka, the heavenly planets of the material world.

Friend2: Temporary. Not that different from earth, but featuring enhanced living conditions.

Friend1: Vishnu is above everyone else. He lies down in rest, with Lakshmi Devi, the goddess of fortune massaging His lotus feet.

Friend2: Through an act widely understood to be involuntary, He creates, maintains and destroys innumerable universes.

Friend1: Breathing. Inhaling and exhaling. The universes are greatness personified. The largest collection of matter, with component objects and living entities.

Friend2: And Vishnu enters into each universe to serve as the maintainer. He further expands to reside with every living being, large and small. 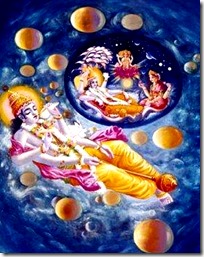 Friend1: I’m glad you mentioned that. So the concept of Vishnu is at the highest aggregate level. The Supersoul, the expansion residing inside of you and me, is at the most granular level.

Friend2: You’ll be happy to know that atomic theory is not a discovery of modern science. It was previously explained thousands of years ago, before anyone can remember. The Supersoul is also in paramanu, or the atom. Without the Supersoul nothing could exist. Just as the atom is the basic building block of life, so Vishnu as the Supersoul is within every object. He is present at every space, making Him the supreme witness.

Friend1: Okay, so the greatness part is easy to understand. Not difficult to accept. The Supersoul might be a tough ask.

Friend2: Who is asking?

Friend1: People who are interested in spiritual life. Those who want to know more about the scientific aspect to genuine religion, as presented in the Vedas.

Friend2: Why is it difficult to accept, though?

Friend1: Because greatness is easy to notice. We see an amazing mountain range. We observe the large cloud approaching, ready to drop a massive amount of rain. We see satellite images from outer space.

Friend2: And there are no such images of the Supersoul.

Friend1: Exactly. Individual soul, jivatma, is itself impossible to perceive with an instrument, as it is known to be the size of the tip of a piece of hair divided into ten thousand parts.

Friend2: Yes, and just one of those parts. We know the soul based on the existence of life, and the same concept applies to the Supersoul. Not every individual soul operating in the same kind of body sees the same results to actions.

Friend2: I decided to get up in the morning. Rise out of bed to start the day. While many millions of people make the same decision and witness the same outcome of success, there are some who do not. They cannot rise. The body type does not allow it. That body is actually a product of nature, which is under the direction of the Supersoul. In this way the individual soul is seated as on a machine.

“The Supreme Lord is situated in everyone’s heart, O Arjuna, and is directing the wanderings of all living entities, who are seated as on a machine, made of the material energy.” (Lord Krishna, Bhagavad-gita, 18.61)

Friend1: I accept that, but again it’s not so easy to notice.

Friend2: Take advantage of the difficulty.

Friend1: What does that mean?

Friend2: Use the presence of the Supersoul as a way to further appreciate God. This is what Devahuti did. She had the great fortune of receiving a personal expansion of God in her womb. Imagine that, God appearing within your own family. The one who is unborn, aja, and without a beginning, anadi, has decided to enter this world through the birth process. 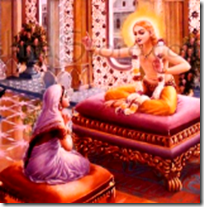 Friend2: Yes. And so Devahuti remarked that it wasn’t so amazing for Bhagavan to do this, since He is known to lie on a banyan leaf at the time of universal dissolution. Markandeya Rishi once got to witness what occurs at the end of a cycle of creation, when no one else is left in the world. He saw a small child, Lord Vishnu, lying on a leaf of a banyan tree, sucking His toe. Within that child’s stomach was the entire universe. Greatness simultaneously paired with a small form. This is the magic of the Supreme Lord. He is perfect in every direction.

As Vishnu over universes to command,

But how as Supersoul to expand?

The great easy to perceive,

But the invisible hard to believe.

Proof from outcomes uniform not,

Variation though same form got.

Devahuti by this feature not amazed,

Since at dissolution on banyan leaf stays.