Talent On Loan From God

“Brahma told them that after taking away all the boys, he saw Krishna again playing with the same boys in the same fashion. Their bodily complexion was blackish, almost like Krishna’s, and they all had four arms. The same calves and cows were still present there, in the same original fashion. Even while describing this incident, Brahma became almost overwhelmed. ‘And the most astonishing thing,’ he added, ‘was that many other Brahmas from many different universes had also come there to worship Krishna and His associates.’” (The Nectar of Devotion, Ch 46)

Every individual has a genius unique to them. Though they may not exhibit the ability in public, though they may be unaware of the presence of this special talent, something amazing exists within them. This is because the spirit soul is the power source, the animating spark, so to speak. In any objective analysis, the soul would be considered amazing.

It never takes birth. It doesn’t die. It can’t be broken apart, suppressed in capacity, thrown aside, buried under a rock, or burned by fire. The soul is the very essence of existence, and to extinguish its liveliness would be to rid the universe of every living thing.

That individual spark of energy is an expansion. This implies that there is an original source, the place from which the expanding began. The Sanskrit word is amsha. In the Bhagavad-gita, Shri Krishna explains from where these amshas emanate.

To distinguish between the source and the offspring, there is the word jiva. This references the individual souls, who have a choice in residence. They can remain in the company of the source, like sparks of a fire close to the blaze, or they can descend to a land of duality driven by illusion; something like the spark falling onto the ground.

Jivas can be found in different locations. Some live in the sky. Some in the water. Others tread the earth. The manifest world, which features the aforementioned illusion, has varying grades of residence. The earth is considered to be in the middle; sometimes pleasant, sometimes miserable. Hell is on the extreme side of unpleasant and heaven the exact opposite.

Jivas are in the heavenly realm, as well, and they exhibit amazing abilities. There they are known as devas; it is easy for even them to forget from where the potency comes, the shakti of the purusha. Paurusham, which is ability or human effort, comes from the same source mentioned before.

The best of the devas is Lord Brahma. Also known as Vidhata, he is the creator. He takes three base material ingredients and sets his imagination free. The result is 8,400,000 different species. These are nothing more than individual combinations of jiva soul and material elements. 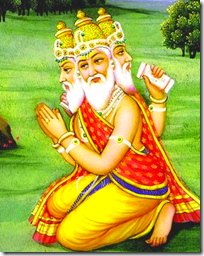 It would be understandable for Brahma to feel a little proud every now and then. After all, there is only one creator in this universe. Every living being traces their ancestry to him, who emerged from the lotus stem growing from the lotus-like navel of Lord Vishnu, who is the same Krishna but in a slightly different manifestation.

One time Brahma’s pride swelled so much that he decided to play a trick on Krishna, who was on earth in the middle of His manifest lila, or pastimes. Brahma knew that his power to create was not of his own making. It was given to him by Vishnu. Every person’s ability has the same source; knowledge of which should keep pride in check.

Brahma saw Krishna playing with cows and cowherd friends. He decided to steal them from Krishna, to see what the Supreme Lord would do. To his surprise, the same Krishna who gives rise to the amshas simply expanded Himself to create identical versions of the missing cows and cowherd boys. There was no suspicion on earth. No one knew anything had happened. The powerful creator was defeated.

He also saw something else of interest. There were many other Brahmas on the scene worshiping Krishna. They came from other universes. The post for which he took great pride was not unique to him. Others were invested with similar responsibilities. The talent loaned out to Brahma was also shared with people from different universes, which could not be seen. 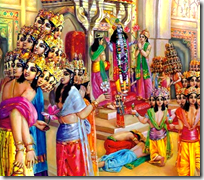 Serving the Almighty is the best use of the talent loaned by Him. Though the potency in the background is someone else, the individual gets full credit, such as with Shri Hanuman and Arjuna. Shri Krishna is kindness personified in this way; He keeps those serving Him always close by and protected from downfall.

When ego too much expanded,

Thought over even Krishna commanded.

Then saw another amazing sight.

That Brahmas from other universes there,

Like Loading...
‹ How Can Bhagavan Hear Every Prayer Offered To Him
Why The Peacock Feather And Not The Snake ›