“She gathered more ropes from the house and added to it, but at the end she found the same shortage. In this way, she connected all the ropes available at home, but when the final knot was added, she saw that it was still two inches too short. Mother Yashoda was smiling, but she was astonished. How was it happening?” (Krishna, The Supreme Personality of Godhead, Vol 1, Ch 9)

1. He broke a pot of yogurt

It was for turning into butter. The mother worked hard. She did not have a machine capable of doing the same. Nothing like “set it and forget it,” there was manual labor involved. Take yogurt, put it in a pot, and then begin the churning process.

By the way, the purpose this time was to feed her son directly. Yashoda had heard complaints. Her darling Krishna was sneaking into the homes of neighbors and stealing their butter. The neighboring mothers utilized their ingenuity to protect from subsequent attacks, but the clever jewel of Gokula kept finding ways to succeed.

He didn’t have an external lighting source, but the jewels adorning His transcendental body were enough. He didn’t have a ladder, but with the help of friends heights no longer became an issue. Sometimes to add to the fun, to almost increase the severity of the injury to the victims, Krishna and His elder brother Balarama would pinch the sleeping children in the homes so that they would wake up.

“If by chance They cannot find the hidden butter and yogurt, They go to our little babies and pinch their bodies so that they cry, and then They go away. If we keep our stock of butter and yogurt high on the ceiling, hanging on a swing, although it is beyond Their reach, They arrange to reach it by piling all kinds of wooden crates over the grinding machine. And if They cannot reach, They make a hole in the pot. We think therefore that you better take all the jeweled ornaments from the bodies of your children.”  (Mothers complaining to Yashoda, Krishna, The Supreme Personality of Godhead, Vol 1, Ch 8)

Yashoda considered that perhaps the butter in her own home was not sufficient. Therefore, she took aim at the best cows in her possession, who ate the sweetest grass. From their milk this butter would be produced, if only her child were patient enough to wait.

As young children are known to do, one day Krishna asked to be breastfed. Even before they learn how to talk, they have a way of communicating this desire. The crying or whining sound is distinct. There are no reservations, either. No concern for what the mother is doing. “Feed me now,” is the message communicated.

Yashoda remembered that there was something cooking on the stove in the kitchen. She then put down her son for a moment to check on the situation. That small amount of time was enough for Krishna to become upset and act. He intentionally broke the pot of yogurt that was being churned into butter.

Knowing that He did something bad, Krishna ran away. This was not necessary. The mother had tremendous love. She would be slightly upset, enough to wield a whipping stick, but there would not be any retaliation. After all, she never did anything after hearing the complaints from the neighbors. She found her son’s ways to be quite amusing.

3. He fed the butter to monkeys

Such hard work to make butter, and here was Krishna taking some of the product and giving it away. Not to His friends. Not to the neighbors. Not to be stored somewhere to eat later. Rather, monkeys were the recipients. In the Bhagavad-gita spoken many years later by the same Krishna the different kinds of charity are discussed. It is mentioned how charity in the mode of goodness goes to proper recipients and without expectation of reciprocation. Monkeys are not mentioned as needing charity.

“That gift which is given out of duty, at the proper time and place, to a worthy person, and without expectation of return, is considered to be charity in the mode of goodness.” (Lord Krishna, Bhagavad-gita, 17.20)

For these reasons and more Yashoda was justified in offering punishment to her son. Since He is the Supreme Personality of Godhead, Bhagavan, things didn’t go so smoothly. The mild punishment of choice was to bind Krishna to a mortar. This was after Yashoda finally caught up to Him.

The problem was that no matter how many ropes she joined together, the mother was always two finger-widths short. Finally, through Krishna’s agreement and arrangement, the connected ropes became long enough. He was bound by the belly to a mortar, thus earning the name Damodara. That special pastime is especially celebrated during one particular month of the year.

The significance is that the Supreme Lord can only come under the control of His devotee; no one else. In fact, with forgetfulness of Him the individual always comes under the control of the grueling and seemingly unconquerable material nature. The threefold sources of misery attack constantly, leading to chaos, fear, despair, heartache and a general feeling of malaise. 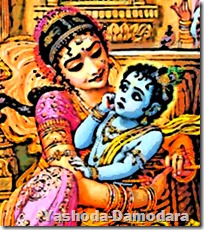 On the other side, in the light of Divine love, there is eternal hope, optimism and appreciation. A person can be transported to that realm even prior to quitting the body. Remembering Yashoda and her butter-pot breaking son is one way. That special area of Gokula can be easily recreated through something as simple as chanting the holy names: Hare Krishna Hare Krishna, Krishna Krishna, Hare Hare, Hare Rama Hare Rama, Rama Rama, Hare Hare.

For many reasons the response required,

By that pastime so many inspired.

Like Loading...
‹ You Don’t Think There Is Progress Made Towards Permanence
Three Areas Where People Are Left Unhappy No Matter The Outcome ›