“My dear gopis, what auspicious activities must the flute have performed to enjoy the nectar of Krishna’s lips independently and leave only a taste for the gopis for whom that nectar is actually meant. The forefathers of the flute, the bamboo trees, shed tears of pleasure. His mother, the river, on whose bank the bamboo was born, feels jubilation, and therefore her blooming lotus flowers are standing like hair on her body.” (Shrimad Bhagavatam, 10.21.9)

It is an extended vision. A wise person can see well beyond what is in front of them. Take the pencil, for instance. Place it in front of a student of child-age and they will likely only consider it a device for composition and art. There is the eraser in the back for correcting errors. There is the sharpener nearby if the point should dull or break off.

The adult with a little education in economics can see well beyond. They understand the many different components that went into the pencil’s construction. People perhaps separated by thousands of miles combined together for the output, most likely unknowingly. Then there are the trucks that drove to deliver the raw materials. The business establishment stocking their inventory along with other related items. The shoppers patronizing the store, perhaps armed with discounts in hand. 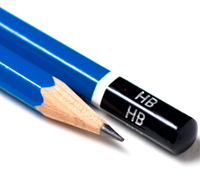 An equivalent on the spiritual side is the humble sage who views with an equal vision. They see different species, understanding that they are nothing more than different collections of the material elements of earth, water, fire, air and ether. The sage sees beyond the gross, going deep inside.

From the operating table a doctor can extract different parts of the body. With modern technology, they only need a special image generated to do the same; leaving the parts intact. They can show the kidneys, the lungs, the stomach, and the heart. Ask them to show the vital force, the animating spark, the one energy whose presence determines life and death, and you are out of luck.

“The humble sage, by virtue of true knowledge, sees with equal vision a learned and gentle brahmana, a cow, an elephant, a dog and a dog-eater [outcaste] .” (Lord Krishna, Bhagavad-gita, 5.18)

The brahmana realized in the truth, tattva, can see this force. They don’t require special technology or advanced degrees. They understand that the human being, the elephant, the dog, and the cow are equal on the inside, because it is the spirit soul that is powering them.

Going beyond the recognition of the spiritual force at the local level and into the realm of the source of everything in His personal form, we have the amazing vision of the gopis. Just from hearing the music Krishna produces in the transcendental land of Vrindavana, their appreciation extends to other areas.

This is Krishna’s instrument of choice. Though in the vision of a youth, the darling child of mother Yashoda is already an expert. The sound travels far and wide. He lives in the home of caretakers to cows, and so if on a given day the calves in His custody should wander astray, Krishna simply ascends His favorite piece of land, Govardhana Hill. From that perch the sound from His flute captivates everyone in His care, as they quickly return to Him.

2. The bamboo used in its construction

The gopis appreciate the wood used to make the flute. They are not silly enough to think that such an important object appeared randomly. They understand that some work had to be applied. The raw material is everything. Make a flute of a different source and the sound might not be the same. Moreover, Krishna seems to be pleased with the flute that He has.

3. The tree from which the wood came

The gopis appreciate the tree that produced the wood that produced the flute that Krishna used to play His amazing music. The tree is also a living entity, classified as nonmoving, or acharam. It is the best symbol of tolerance, as it accepts whatever weather conditions and stays in its place. The tree made a tremendous sacrifice, but its output was used for the highest purpose: pleasing the Supreme Lord.

4. The grass and surrounding flowers

The tree did not grow in a greenhouse. It was not produced in a vacuum. There was a surrounding environment, and so the gopis had appreciation for the plant life, as well. The grass and flowers also benefitted because of the connection at the end to the Supreme Lord in the full feature, Bhagavan.

5. The nearby body of water

The flowers around the tree were near a body of water, which also received a benefit. The tree thrived because of the surroundings, and that vibrancy led to suitable wood to be used for making the flute. 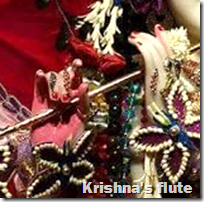 As the gopis appreciate in this way, the Supreme Lord does the same. This is further justification for accepting the bhakti path. It brings benefits to so many people connected in the chain, whether they are aware or not. The sukriti builds, and the people to whom those meritorious credits belong become better situated to find the path to transcendence one day in the future.

All parts in chain commending.

Understanding that wood necessary so,

Coming from tree in which to grow.