Four People Who Would Cite The Glories Of Prahlada

“In any assembly where there are discourses about saints and devotees, O King Yudhishthira, even the enemies of the demons, namely the demigods, what to speak of you, would cite Prahlada Maharaja as an example of a great devotee.” (Shrimad Bhagavatam, 7.4.35)

The mention by Narada Muni is significant. He is known for travelling the three worlds and chanting the glories of Narayana, the Supreme Lord in the personal form. If he discusses the good qualities of a person other than Narayana, there must be a direct link. The gunas, the glories, must be similar; otherwise there is no need to praise.

Narada says that Prahlada is one such praiseworthy person, who is mentioned anytime there is a discourse or assembly discussing saintly people and devotees of the Supreme Lord. As Prahlada referred to his father as the best of the asuras, or bad guys, the son is one of the most exalted personalities of this universe.

He heard the story of Prahlada directly from Narada. Yudhishthira is known as the son of dharma, who is the god of justice. As would be expected, the son took to the same behavior, always remaining conscious of right and wrong. Every person makes mistakes now and then, and so Yudhishthira was not perfect. But in the eyes of everyone who knew him, he always maintained attention on the proper course of action.

Even Yudhishthira would praise Prahlada. This is because though best known for his teachings and behavior as a five year old child, Prahlada exhibited exceptional courage, grace and understanding. He endured unimaginable violence inflicted against him and never held a grudge against the aggressors. Yudhishthira was similar in that after victory in the great Bharata War and suffering the crimes committed against his family for many years prior, he never held contempt for the other side.

2. The enemies of the demons

Prahlada appeared in a Daitya family. That race of people was historically the enemies of the suras, who are the demigods. We can think of it like two warring communities. If a new person should be born to the rival party, it is expected for the other side to maintain the rivalry with the new generation.

Yet even the suras would praise the qualities of Prahlada. The boy was nothing like his father. Even amongst the demigods there was no one like him. After Hiranyakashipu’s reign of terror came to an end through the direct intervention of Vishnu, all the suras were afraid to approach the Supreme Lord, who displayed a visibly angry form in Narasimhadeva, the half-man/half-lion. 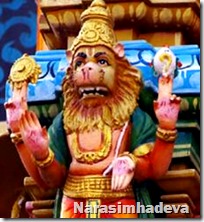 Prahlada, however, was not afraid. He approached without fear, as it was for him that Vishnu took this amazing form. Not only is Prahlada praised by demigods in assemblies, he was praised while directly in their presence during a famous incident.

It is in the nature of saints to praise other saints. In material life envy is so strong that I may even extend the emotion to my children. If they should surpass me materially, if they perform better in school than I did, while outwardly showing happiness, deep inside I feel threatened. It’s as if their achievement diminishes my own accomplishment. The same rivalry is there with friends, who are supposed to be well-wishers.

With saintly people, the behavior is the opposite. They are always glorifying the achievements of other saintly people. If there is envy, the emotion is used towards better serving the Supreme Lord. They always think, “This person is a better servant than me. They are kinder and gentler. They are more compassionate.”

This extends beyond good qualities. More than just being kind, forbearing and maintaining an equal vision, the devotee is always connected to the Supreme Lord. If they are in an assembly the discourse is not exclusive to Vishnu. They may spend the entire time glorifying another devotee. 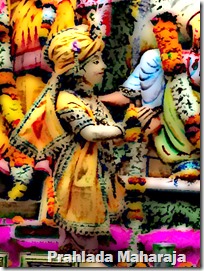 In such discussions, Prahlada gets mentioned quite often. Such an amazing person appeared in the most unexpected of places, proving that true value is determined from a person’s qualities, not the situation of their birth. Ancestry may play a role in influencing behavior, but ultimately the individual spirit soul always has the choice of associating with either illusion or the transcendental light.

Though in house of Daityas raised,

Even by enemies of demons praised.

Yudhishthira and Narada for sure,

That boy who so much to endure.

But tallest in stature stands.

Saints also to discuss him known,

Like Loading...
‹ Doesn’t Prahlada’s Attitude Go Against Human Nature
Couldn’t You Say Prahlada’s Childhood Was Stolen From Him ›