Home › conversations › Don’t You Get Tired Of Praising Devotees

Don’t You Get Tired Of Praising Devotees

“In any assembly where there are discourses about saints and devotees, O King Yudhishthira, even the enemies of the demons, namely the demigods, what to speak of you, would cite Prahlada Maharaja as an example of a great devotee.” (Shrimad Bhagavatam, 7.4.35)

Friend1: There is the statement by Narada Muni about how Prahlada would be praised in any assembly of devotees and certain other kinds of people.

Friend2: Do you understand why that needs to be stated, i.e. why that is remarkable?

Friend1: Because Prahlada was an outstanding devotee at just five years of age, showing wisdom well beyond his years?

Friend2: It’s primarily because of the great contrast. He was born in a Daitya family. These were typically enemies to the suras, the demigods. Narada made the statement to Yudhishthira, who was born of the god of justice, Yamaraja. Yudhishthira is essentially dharma in living form.

Friend2: An all-around good person. Beyond being nice and holding the door open for someone prior to entering a building, he would always think of the proper course of action before starting any endeavor. He had such a soft heart that even in a case where violence was justified against the aggressors, he was hesitant to inflict lethal force.

Friend2: Yes, they are examples of an ideal king. 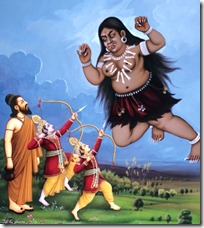 Friend1: I know in Rama’s lila there is a similar incident. He was hesitant to take aggression against the female demon-like person named Tataka.

Friend2: Yes, since it is a violation of dharma to strike a female. The guru, Vishvamitra, settled the issue of contradictory paths. He urged Rama to fight on, to eliminate the danger to the sages residing in the forest.

Friend1: Anyway, back to Prahlada. Don’t get upset with me here.

Friend1: I agree that Prahlada should be praised. It makes sense that saints would discuss him. He is one of the twelve mahajanas, or great personalities, listed by Yamaraja. The thing is, don’t people get tired of praising devotees?

Friend1: Every day the same thing. “This person was great. That person was amazing. We should learn from them.” Blah blah blah.

Friend2: You would rather they talk about something else?

Friend1: I don’t know. It just seems like there has to be a limit.

Friend2: That’s the thing: there is no limit to the glories of these people. Prahlada can be studied and honored for many lifetimes. As a child you can relate to him because he had a horrible parent. As a student you can relate to not being interested in the subject matter taught in school. As a loving family member, you can understand why he still felt compassion for Hiranyakashipu, who was a wicked attempted murderer.

Friend1: Hmm, I never thought of it that way.

Friend2: As a parent you can appreciate him even more. Once you have your own children you will realize how exceptional Prahlada is. Most adults don’t reach that level of realization of both spirit and matter. He was at the liberated state right from birth. You can praise him endlessly, and also those associated with his situation, like Narada Muni. From the Prahlada story you see the effectiveness of transcendental sound. It can rescue a person while they are still in the womb, what to speak of when they are mature and capable of discrimination.

Friend1: Those are great points.

Friend2: Another question to ponder. What else do you want people to talk about? The entire world follows this path: praise or criticize. That is what newspapers and blogs are based on. Praise someone for satisfying some desire, for doing something that is considered good. Dishonor someone who fits into the opposite position. Over time the same personality might receive both treatments, from the same observers. If you’re going to praise, why not focus on exceptional people that can do so much good for the world, long after they have left it? It’s amazing to me that we can still talk about Shri Rama, Yudhishthira, Prahlada, Narada and others. That shows there must be something more to them, that their way of life is one worth emulating.

Since so much good in store,

In daily praise not to bore.

Can speak of Prahlada forever,

Better than with material to choose,

Where one day appreciation to lose.

Exceptional in character and behavior shown,

Saints as the brightest stars known.

Categories: conversations, the story of prahlada