Home › the four › Four Reasons Hiranyakashipu Should Not Have Been Morose

Four Reasons Hiranyakashipu Should Not Have Been Morose

“Thinking in this way, the King of the Daityas, morose and bereft of bodily luster, remained silent with his face downward. Then Shanda and Amarka, the two sons of Shukracharya, spoke to him in secret.” (Shrimad Bhagavatam, 7.5.48)

He was full of anxiety. The face of the king of the Daityas remained down. It was something like the player in tennis showing everyone his depression over having squandered many opportunities to win the previous set. The coaches give a reminder to remain optimistic, to hold the head up high. The obvious signs of sadness give hope to the opponent, encouraging them that they are doing well and on the path to victory.

An outside observer is puzzled by the situation. Hiranyakashipu had many reasons to feel the opposite way. Rather than be morose, he should have been jumping for joy on a daily basis for the many blessings that came his way.

1. He had previously met Lord Brahma

Deep down the individual understands that there is more to this world. Nature did not simply arrive through a collision of chemicals. Maybe chemicals react in a certain way to create objects and substances, but there is always an instigator. Cause and effect. That which is seen had to be created through an actor. Shri Lakshmana confirms this principle in the Ramayana.

“Unseen and indefinite are the good and bad reactions of fruitive work. And without taking action, the desired fruits of such work cannot manifest.” (Lakshmana speaking to Lord Rama, Valmiki Ramayana, Aranya Kand, 66.17)

Imagine if you could receive confirmation on the creation of this universe. The Vedas explain that at the origin is the Supreme Lord. One way to understand God is to conceive of the concept of the beginning of time and prior to that. Adi and anadi. There is an original time period and there is also the lack of an origin. Both definitions apply to God, who is also known as Vishnu.

Vishnu then empowers people to create. His hands do not get dirty, so to speak, because it is not necessary. Why not put exalted people in charge, who will feel uplifted through some dedicated service? The creator is Lord Brahma, who is also known as the first living entity. He is svayambhu, or one who is self-born. He does not have the typical set of mother and father. Brahma emerges from the lotus stem that grows from the lotus-like navel of Padmanabha, which is another name for Vishnu.

A person may be skeptical in this area:

“Oh, those are just stories meant to give people a stronger belief in God. It is said that Brahma has four heads and uses the three main ingredients of goodness, passion and ignorance to create. That is nice in theory, but no one actually believes this to be possible. Vedic teachings are meant to be understood allegorically.”

Imagine if you received visual confirmation. Hiranyakashipu underwent severe austerities, to the point of getting the attention of Brahma. Not only did Brahma arrive, he was ready to hand out rewards. Hiranyakashipu should have been thrilled over this rare achievement.

2. He received the blessings of the creator

Brahma gave visual confirmation of his existence to someone conducting austerities. He was prepared to grant anything asked for, up to the barrier of immortality. Hiranyakashipu took full advantage. He asked for every protection he could think of, i.e. de facto immortality. Brahma did not deny any of the requests.

If the average person were to receive such protections, it would take tremendous stress out of the daily existence. No having to worry about dying during the day or night. No human being or animal could successfully attack you. Defense is one of the four basic animalistic tendencies, and if that is accounted for without issue there is not as much to worry over.

3. He was king of the world

Hiranyakashipu, of course, took full advantage of those boons. If he were unbeatable in battle, why not challenge the strongest? Why not occupy a foreign territory? Why not make rivals run away in fear, possibly taking disguises so as to not be further recognized?

Hiranyakashipu should have been thrilled to become king of the world. Anything he wanted, at any time, with everyone at his service. No worry about the future of the company. No attention paid to profit and loss. Enough food and wine to consume for many lifetimes.

4. He had the most saintly son

To that king of the demon-race, the Daityas, arrived a true saint. It was in the very home, the same family. Prahlada was one of Hiranyakashipu’s sons, and he happened to be a pure devotee of Vishnu, from the time of birth.

In truth, this was the most valuable benediction the king received. All the money in the world cannot compare to a moment’s association with someone carrying the wisdom of the ages, the timeless teachings and traditions of the Vedic culture.

Hiranyakashipu was even fortunate enough to hear some of these teachings, directly from the son. The child was not shy in sharing. He was ready to liberate the father through a hoped-for turn in the right direction, away from atheism and towards the Divine light.

In spite of these many blessings, Hiranyakashipu was still morose. This sadness was especially prominent after having failed to kill the five-year-old Prahlada. There were multiple attempts, for sure. The king could not believe that the son survived. The teachers within the royal family tried to lift up his spirits, to make the negative not seem so bad.

From that king’s disposition we see that material life is never enough. All the money in the world will not make a person happy. Neither will supposed protection from death, as complete immunity from the attacking forces in this world is impossible. Just one percent mortality is enough for kala to strike.

The son, on the other hand, hardly had anything. There were people persecuting him on a regular basis. Who would actually want to be his friend after hearing the teachings against the ways of royal acquisition? Who would want to live somewhere that you are not welcome? 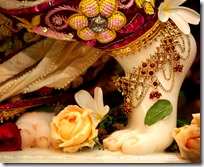 Yet since he was connected in yoga, there was complete peace. He considered it the greatest blessing to be able to remember the Supreme Lord on a daily basis, which is actually possible for every person through the maha-mantra: Hare Krishna Hare Krishna, Krishna Krishna, Hare Hare, Hare Rama Hare Rama, Rama Rama, Hare Hare.

After attempts of outcome bad,

Though happy should be,

Since the creator to see.

And amazing boons to receive,

Of power never to conceive.

Son persecuted on other side,

But always in peace to reside.