Home › conversations › What Is Wrong With What The Teachers Taught Prahlada

What Is Wrong With What The Teachers Taught Prahlada

“When one is above the stages of dharma, artha, kama and moksha, one becomes a devotee. He is then on the platform from which he is guaranteed not to fall again to material existence (yad gatva na nivartante [Bg. 15.6]). As advised in Bhagavad-gita if one transcends these four processes and is actually liberated, one engages in devotional service. Then he is guaranteed not to fall to material existence again.” (Shrila Prabhupada, Shrimad Bhagavatam, 7.5.52 Purport)

Friend1: Let’s continue with our discussions on Prahlada Maharaja.

Friend1: We are in the section where the teachers mollified an angry Hiranyakashipu, to an extent. They told him to not be morose over Prahlada’s survival against the many carefully thought-out lethal attacks.

Friend2: Step back and consider the situation for a moment. Hiranyakashipu was leader of the world. No one above him; at least according to his estimation. He had a humble and obedient son named Prahlada. The one issue was that Prahlada would not abandon worship of Vishnu. This so angered the father that he insisted on killing the child.

Friend1: And then the sole reason for being morose was failure.

Friend2: The king of the world lacked sufficient power to take out a five year old child, who had no other assistance. Pretty amazing stuff this Vedic literature presents. 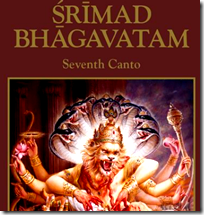 Friend1: The royal teachers said that Prahlada would one day turn around. There wasn’t much harm to expect, anyway.

Friend2: Why not give that advice before the lethal attacks? It’s a rhetorical question, but you see what I mean.

Friend1: Sure. Absolutely. In the Shrimad Bhagavatam we read that what the teachers did next was force-feed instruction on the four paths of life described in the Vedas.

Friend1: Religiosity, economic development, sense gratification, and then liberation. You find these goals mentioned in many places.

Friend2: They are what distinguish the human being from the animal. The four tie together. Not that I engage in just religion and forget everything else. Not that my sole interest is enjoying the senses, at the expense of long-term benefit, paramartha.

Friend1: Here is my question. What is wrong in what the teachers taught?

Friend1: Why would someone find fault with that method?

Friend2: Umm, did you not see the father’s predicament? He followed dharma in the form of worshiping Lord Brahma, the creator. He developed the economy sufficiently through ruling the kingdom. There was ample sense gratification. Liberation? Save that for later; maybe. Despite following this path, as was the tradition in the family of Daityas, Hiranyakashipu was completely miserable.

Friend1: Okay, but you have just fallen into a trap. The Vedas teach the four rewards. The teachers in the Daitya family taught the four rewards. Hiranyakashipu followed that path. He was miserable. Therefore, why are the Vedas presenting something that will make people miserable?

Friend2: Ah, now that is a great question.

Friend2: It is not that the four rewards will leave a person miserable in the end.

Friend2: It is just that there is something beyond. You could follow dharma perfectly and still be completely unsatisfied. You are vulnerable to the sources of misery in the material world. That is the meaning. The four rewards are indeed important. Every person needs a start. Better to be a little religious than not at all. Better to at least acknowledge and think of God than to remain in the dark. Look at the end result here. Hiranyakashipu met Vishnu face-to-face. He received liberation, even after being such a horrible person. This means that there must have been some hint of religion. He must have been a special person.

Friend1: But bhakti-yoga, devotional service, is supposed to be higher. 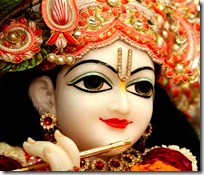 Friend2: On a different platform. When you are connected in yoga, you do not need to follow the standard path. Prahlada was not even an adult yet. He could not take the steps necessary to satisfy interest, artha. He had no means of satisfying the senses. Yet he was totally liberated. He bypassed the need for what the teachers were teaching him. He indeed could have taught them a lesson or two; that is the power of bhakti. Devotional service is the real meaning of dharma.

This from royal teachers taught,

But for king only misery brought.

Idea that beyond the acceptable,

Which Prahlada already to feel.

Like Loading...
‹ The Two Conflicting Interests Of Father And Son
Three Occasions When It Is Okay To Call Out To Bhagavan ›

Categories: conversations, the story of prahlada