“O son of Bhrigu [Shaunaka], when the child Parikshit, the great fighter, was in the womb of his mother, Uttara, and was suffering from the burning heat of the brahmastra [thrown by Ashvatthama], he could observe the Supreme Lord coming to him.” (Shrimad Bhagavatam, 1.12.7)

In one situation you have everything covered. At least that is your understanding at present; outside help is not required. A job which pays enough to meet the monthly expenses. Sufficient assistance at home to manage affairs, such as childcare and tidiness.

In another situation a person is down on their luck. They feel completely helpless. It’s as if the forces of nature have conspired to bring misery, pain and heartache. This person sees no way out of the suffering besides one avenue.

Of the two, Goswami Tulsidas prefers the latter. The Supreme Personality of Godhead, Bhagavan, is patita-pavana, or the savior of the fallen. The great Vaishnava poet would rather be viewed as helpless, as he gives three instances from the Mahabharata where Shri Krishna provided direct relief.

1. Draupadi and her sari

The beautiful and chaste princess is in a dangerous predicament. Vile human beings, who are rivals to her husbands, wish to strip her naked in front of an assembly of respectable individuals. This is not her choice. She would rather remain the way that she is.

The Kauravas are strong and powerful, and so they should succeed in this task without issue. No one else will lift a finger in support of Draupadi. She has no choice but to try herself. She desperately holds onto the sari, but to no avail. The enemies are about to win.

Then she calls out to Govinda in desperation. At that point no one else can save her. Krishna hears her call and arrives on the scene in the form of the sari. Just as He is Ananta, or without end, He transfers the same property to the garment of the princess. No matter how much the fiends pull, they are unable to remove the sari, in the same way that the asuras and the lowest among men can never eliminate God and worship of Him from this world.

2. The sparrow in the field of Kurukshetra

The Kauravas and the Pandavas eventually went to war. It took place on the field of dharma, also known as Kurukshetra. The associated story has several variations, but the general idea is that a sparrow residing in a nest on one of the trees in the field has fear over what will happen. So many elephants will walk on the ground, causing damage and destruction. How will the sparrow protect her children, who are in egg-form at the moment?

Shri Krishna hears the calls for help and responds by releasing an arrow towards one of the many elephants in vicinity. The surgical strike reaches the bell on this particular elephant. The bell lands directly on top of the sparrow and her nest, thereby providing them safety during the war that eventually saw millions of casualties.

3. Parikshit in the womb

Despite the many insults to Draupadi and the Pandava family, at the end of the great Bharata War there is compassion extended to a person named Ashvatthama. He had just killed Draupadi’s sons in cold blood. He deserved the death penalty, which Draupadi’s husband Arjuna was ready to carry out. The embodiment of justice, Shri Krishna, gave His consent.

Yet Draupadi offered clemency due to Ashvatthama’s relation to the family guru, Dronacharya. Another of Ashvatthama’s attacks was on the womb of Uttara, who carried the future of the Pandava dynasty. She was with child, and the brahmastra was ready to do the ultimate damage. 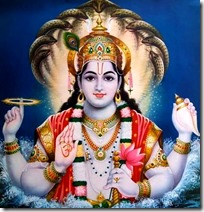 The helpless child in the womb was saved through Krishna’s direct intervention. He countered the weapon and ensured that the now famous king would live to adulthood and fulfill the destiny of hearing the sacred Shrimad Bhagavatam from the mouth of Shukadeva Gosvami.

The acharyas make the comparison to a young child calling out desperately for their mother. In certain situations, no matter how much the father may try, the only relief is from the mother. There is the natural bond. The child does not have to think of anyone else. They know on instinct who will save them.

In the same way, if a person in desperation makes a plea to the Supreme Lord, He will indeed save them. The Mahabharata gives many examples, but the true history of Bhagavan’s lila is endless. His pastimes continue to take place in this and innumerable other universes, and a surefire way to get His attention is to repeat the holy names: Hare Krishna Hare Krishna, Krishna Krishna, Hare Hare, Hare Rama Hare Rama, Rama Rama, Hare Hare.

When in dangerous place setting,

One way His attention getting.

Just the name once to say,

Or the sparrow protected by bell,

Not much over fate commanding,

But Krishna for protection standing.