“A few days after the killing of Dhenukasura, people began to come into the Talavana forest to collect the fruits, and animals began to return without fear to feed on the nice grasses grown there. Just by chanting or hearing these transcendental activities and pastimes of the brothers Krishna and Balarama, one can amass pious activities.” (Krishna, The Supreme Personality of Godhead, Vol 1, Ch 15)

The male cowherd friends were interested in going to a specific area. It was a beautiful slice of nature, with wonderful surroundings in a peaceful setting. The aroma of the fruits was too enticing to ignore. The friends wanted to have a taste.

The problem was that an asura by the name of Dhenuka was terrorizing the place known as Talavana. Therefore, even with the desire to eat the fruits the boys were too afraid to step foot in that place. They approached Shri Krishna and His elder brother Balarama.

Those sons of Devaki were known for their fearlessness and strength. They could lead the way, take the fruits, and even if Dhenuka and others were to attack, there would be no danger. That is exactly how events played out.

Balarama took care of Dhenuka first. This was a demon in the form of an ass. Balarama embodies the guru-spirit, the representative of the Supreme Lord who always has only a single interest. Balarama protects Krishna from physical harm and through the gurus he inspires the lost souls wandering in the cycle of birth and death can get protection from the asura-like elements they face on a daily basis. 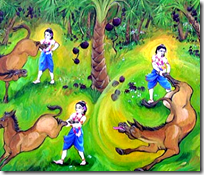 The representatives like His Divine Grace A.C. Bhaktivedanta Swami Prabhupada can transfer me to places similar to Talavana, which were previously off-limits. Prior to the meeting, there were obstacles in my way, and they seemed impossible to overcome.

Everyone else is drinking. Maybe not on a daily basis, but at least on the weekends. They like to attend parties and pass the time in jubilant intoxication. I’m not judging them, but my interests have always been different. I can understand the occasional indulgence in adult beverages, but regular intoxication to me seems like giving up.

If I should happen to stop eating meat and follow temperance in alcohol consumption, I will ostracize myself from society. There is no doubt about it. People will think that I am weird, that I am punishing myself for no reason. Will not all of my friends abandon me? Who wants to go through life alone?

2. Fear of missing out

I take great joy from hearing about the Supreme Lord’s pastimes, like those described in the Ramayana and Shrimad Bhagavatam. Yet there is this inherent fear that if I devote too much time to that reading, I will be missing out on the fun in life.

The elders have given me warnings along those lines:

“Why do you want to be a sannyasi already? You are young. Have some fun. Save the serious stuff for later. You don’t want to regret having missed out on all that life has to offer.”

3. Fear of the unknown

The devotional way of life seems natural, but the actual transformations which transpire are unknown to me. I don’t know what awaits on the other side. And who can actually be sure of the destination after death? We are all going to die one day, so how do I know for certain that my next life will be superior to the one I have right now?

The guru helped me in clearing these obstacles. The taste of the fruits on the other side were indeed as enticing as advertised. I feel more powerful now than I ever have before, even though my physical strength may not be what it used to. I have more enthusiasm each day, where the utsaha seems to steadily grow, like an investment portfolio surging in value from compounding interest. 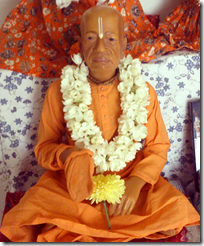 All of this is due to the protection of the guru and the jewel they offered me in the routine of chanting the maha-mantra: Hare Krishna Hare Krishna, Krishna Krishna, Hare Hare, Hare Rama Hare Rama, Rama Rama, Hare Hare. We honor the representative of the Supreme Lord every day, and we especially remember them on the anniversary of their appearance, where they came to this world to appropriately represent Vyasa, the literary incarnation of Krishna.

So that friends the fruit to taste,

And imminent danger to erase.

Guru with the same spirit taking,

And transformed this life making.