“When the living entity wants to enjoy the modes of material nature in their totality, he prefers, out of many bodily forms, to accept that body which has nine gates, two hands and two legs. Thus he prefers to become a human being or a demigod.” (Shrimad Bhagavatam, 4.29.4)

Friend1: I think one of the more eye-opening teachings from the bhakti school, at least for someone who doesn’t grow up in that culture, is the equality with the animals.

Friend2: You mean that human beings and animals are no different?

Friend1: At the individual level, based on the soul. This whole dichotomy between body and spirit. I think most religions, or faiths if you want to use that term, do not delve into that area.

Friend2: Yeah, take the idea of a savior, be absolved of sin and don’t inquire any further.

Friend1: You are a bad person. Don’t risk eternal damnation. Avoid the sentence to hell. Sign up with our denomination.

Friend2: No inquisitiveness at all as to the nature around us. If I am condemned for not believing, what happens to the people who never get to make that choice?

Friend1: Such as the children who don’t make it out of the womb alive.

Friend2: And to err is human. If based on my circumstances I can’t become convinced of a certain path, why would I forever be punished? Shouldn’t I get another chance? God is so miserly as to take revenge on me? Makes no sense, because then many authority figures would be superior to God in that area.

Friend1: Because they are forgiving. Like the parent not minding if the child happens to reach onto the altar and take a sacred picture of Sita and Rama.

Friend2: The child shouldn’t do that, but still. They are a child. They don’t know better.

Friend1: Back to my original topic. If someone argues that the animal has a different kind of soul or no soul at all, how do we respond?

Friend2: You can go off symptoms. This is the comparative method employed by His Divine Grace A.C. Bhaktivedanta Swami Prabhupada. The animal eats. It sleeps, mates and defends.

Friend1: As do the humans.

Friend2: The nature of the interaction may be different. A tiger consumes different food than a cow. A king may enjoy a fancy dinner while the average person subsists on inexpensive noodles.

Friend1: But no one would say that the king has a different kind of soul than the citizen they protect.

Friend1: Okay, so that is a kind of empirical evidence. Not direct perception, in the true sense. What about evidence from shastra?

Friend2: Isn’t that the foundation of this entire discussion?

Friend1: Do you have any specific verses? In the Bhagavad-gita we get hints, such as the living entity carrying conceptions to future lives, like the air carrying aromas.

Friend2: The body/spirit distinction explains everything. There is no qualification on the type of body. The same spirit soul can occupy any form, of which there are 8,400,000 available. This is due to the artistic ability of Lord Brahma, the creator.

Friend1: Again, any type of direct verse reference would be helpful.

Friend2: You can find them in Shrimad Bhagavatam. The teaching is so fundamental to the entire culture that specific references aren’t required. You also have the instances where someone had a future birth in a different kind of body.

Friend1: Oh, right! Like King Nriga as a lizard. Bharata as a deer.

Friend2: Don’t forget the sons of Kuvera as trees. You see, your focus is only on the animals, but the soul can inhabit any type of body. The soul within the tree is identical in quality to the soul in any other kind of form.

Friend1: That’s good to know. Thanks. 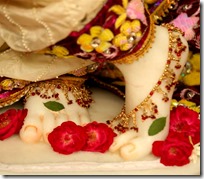 Friend2: Atma is the animating force. Soul inside. Paramatma is the ultimate guiding force. Without Paramatma nothing would exist. Join atma and paramatma. That is yoga. As Shri Krishna advises, in every respect become a yogi.

That animal and human similar so,

One kind of soul in forms to go.

Not mythical secret to say.

Truth in human birth to reveal.

Like Loading...
‹ Three Symbolic Aspects To The Draupadi Sari Incident
Three Areas Where It Is Difficult To Be A Self-Starter ›