Home › the four › Four Daily Activities That I Struggle With

Four Daily Activities That I Struggle With

“O best of the Bharatas, now please hear from Me about the three kinds of happiness which the conditioned soul enjoys, and by which he sometimes comes to the end of all distress. That which in the beginning may be just like poison but at the end is just like nectar and which awakens one to self-realization is said to be happiness in the mode of goodness.” (Lord Krishna, Bhagavad-gita, 18.36-37)

The three modes of nature. Goodness, passion and ignorance. Sattva-guna, rajo-guna, and tamo-guna. These are different grades, classifications, if you will, for activities, body types, ways of thinking, and even happiness.

Goodness is the superior mode, and Shri Krishna explains that happiness in goodness actually starts out as poison. This should not be difficult to understand. The triumph feels sweeter after past failure. The end of the long race brings relief that was a distant thought during the beginning, when there was a significant struggle to get started.

Happiness in goodness is also conducive to self-realization. This means that if I want to understand things as they are, to see clearly, to no longer be deluded by the pendulum of enjoyment and renunciation, the toggling between joy and misery, then it will take some effort.

There are basic activities that we have a difficult time following. From the many days’ worth of past experience, I should know better, the proper course, but in the moment the gravitation is towards the opposite direction.

The young child is the ideal example. Not yet two years of age, she still requires some assistance in falling asleep. The books recommend placing them in a separate room starting at three months of age. That is easier said than done; did these authors live in a giant mansion or something, with a baby that never cried?

She sleeps with her parents, but to get her to fall asleep is not easy. You have to carry her and move around. You know that she is extremely tired. She knows it, as well, but doesn’t want to fall asleep. She puts up a fight in the beginning, only to relent after a little while. She then sleeps soundly through the night.

2. Waking up in the morning

For this analysis we transition to the adult. Last night was so much fun that I stayed up late. I didn’t want to put a halt to the enjoyment. That was then and this is now; the morning. I have been sleeping for so long, and I don’t want to get up. Another day of pressing responsibilities, and I don’t want to deal with the stress. Let me continue sleeping, even though I know procrastination will not help things. 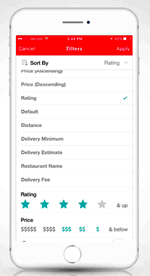 Yes, they say walking is good for you. It would be better to go to the restaurant and pick up dinner. At the same time, I am already lying in bed, watching television. I can order the meal for delivery directly from my smartphone. I will only have to get up to open the front door. What could be better than this?

At the same time, I complain about my physical stature. It would be nice if my pants fit better. I don’t like the way I look in the mirror. Whenever there is an excuse to eat nicely, I take advantage. If others are feeding me, isn’t it rude to say, “No”? Why draw extra attention to myself?

In these cases a little pain in the beginning yields a desired fruit in the end. Sleep is important at night. Waking up on time provides the spark for a productive day. Moderation in eating is always good, as Krishna explains that the way of a yogi is to sleep and eat in the proper amounts.

“There is no possibility of one’s becoming a yogi, O Arjuna, if one eats too much, or eats too little, sleeps too much or does not sleep enough.” (Lord Krishna, Bhagavad-gita, 6.16)

Krishna’s representative imposes some requirements to help in purifying my consciousness. He is not trying to torture me. The objective is not to win a contest in renunciation. He says to avoid the four pillars of sinful life: meat eating, gambling, intoxication and illicit sex. More importantly, create a daily routine of chanting the holy names: Hare Krishna Hare Krishna, Krishna Krishna, Hare Hare, Hare Rama Hare Rama, Rama Rama, Hare Hare. 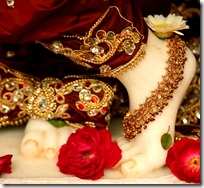 I will struggle in the beginning, no doubt. I will question the methodology, the reasoning behind the principles. I might internally curse at the guru for ruining my life. After a while, though, I will never look back. The nectar-like enjoyment of surrender to the Supreme, sharanagati, is the reason I was put on this earth.

Like poison at the start,
From routine ready to depart.

But when firm and steady,
For joy like nectar ready.

So with bhakti principles applying,
And faith in the guru relying.

For experiencing that higher taste,
And struggle of past to erase.

Like Loading...
‹ Doesn’t Failure Put My Faith At Risk
Why Didn’t Ravana Ask For The Boon Of Defeating God ›