“I shall go with you today to the forest. There is no doubt about it. I cannot be prevented, O greatly fortunate one. I am ready to go.” (Sita Devi speaking to Lord Rama, Valmiki Ramayana, Ayodhya Kand, 27.15)

1. A pious ruler protecting the people

Sita Devi, the goddess of fortune, entered the family in Videha through an unusual way. The ruler at the time, following in the family tradition, was very pious. Ploughing a field one day in preparation for a yajna, for satisfying the Supreme Lord Vishnu, Janaka found a baby girl in the ground. The previously dispassionate one immediately held affection for her, as he removed the dust from her body and held her in his arms.

Janaka named her Sita, and that child was familiar with a pious ruler protecting the people since the time of her birth. There was respect from low to high. The citizens were treated equally in the sense that they enjoyed the comfort, safety and auspicious surroundings that descend from a good leader.

The dream is quite common in the modern day. The distressed employee has the following vision:

“I’m telling you, if I win the lottery I am out of here! My resignation letter will be quite short: I quit. I am totally serious. That would be the ultimate dream. No more having to sit on the bus for hours every day. No more listening to the boss yelling irrationally, when I haven’t done anything wrong.”

Imagine if you were born into royalty. Servants to take care of every need. The most beautiful palaces to call home. No need to go apartment or house hunting. Your family’s property is the most valuable. You don’t have to pay property taxes and neither is there concern over maintenance. 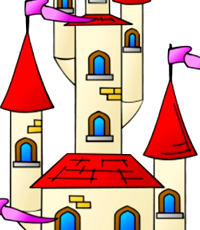 Sita Devi grew up in such circumstances. Since Janaka found her, she lived amongst royalty since the time of birth. She was the beloved princess to those parents who were previously childless.

3. Wealth to distribute to brahmanas

Janaka was not a miser. Aligned with the tradition associated with pious rulers, he would donate wealth in charity to those who were worthy. The Bhagavad-gita gives an idea of such charity, which falls into the mode of goodness.

“That gift which is given out of duty, at the proper time and place, to a worthy person, and without expectation of return, is considered to be charity in the mode of goodness.” (Lord Krishna, Bhagavad-gita, 17.20)

Sita Devi is the goddess of fortune, so this behavior was an extension of her own tendency. Her entire existence is based on the happiness of her husband, the Supreme Lord Narayana. As the brahmana class is dear to Vishnu, so Sita is known to be generous for the purpose of pleasing her husband.

Go around the room at an office meeting and ask each person to describe their perfect day. After some thought, they make an attempt at answering. While there is certainly variety to the scenes and activities, one thing seems to be common: family.

People want their close family members with them. Nobody wants to spend their perfect day alone. They want to enjoy with those who are dear to them. Some even reminisce to their childhood days, when they lived with a huge extended family in a different part of the world.

Sita Devi had such a family growing up. They were with her in Janakpur, along with the supportive citizens. The people always wanted the best for her, including at the time of her svayamvara, the self-choice ceremony for marriage.

The etiquette at the time was that saintly rulers would receive advice from the brahmana class. This meant that saintly people were always visiting Sita’s home and having talks on dharma. She learned the proper role of a grown-up woman in the family. The people visiting would also describe her future and where she would likely spend her time.

Later in life, there was a complete reversal. Sita Devi had to abandon everything with which she was familiar. Growing up in royalty, she also married into it. She went from one pious protector in Janaka to another in King Dasharatha. Her husband was the heir apparent, but things took a sudden turn for the worst.

Shri Rama went from prince to pauper overnight. Sita could have remained in the kingdom, in surroundings that were familiar to her. Instead, against the advice of everyone, she insisted on accompanying Rama to the forest, to roam the world like an ascetic for fourteen years. 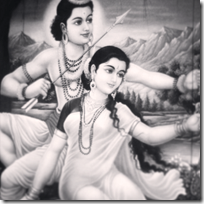 This means that even though the goddess of fortune holds all wealth and is comfortably seated next to the most powerful person in the world, she is also the most renounced. In special circumstances, she directly seeks out the saintly people to be the recipients of rewards. The forest would give her the chance to bless many such people, and she was excited for the opportunity.

Rather for God with eyes to see,
Better in pious position to be.

So that by His vision perceived,
And maybe one day as guests received.

Like Sita Devi with husband going,
Links to royalty not showing.

So that Rama always pleased,
And pains of separation eased.

Like Loading...
‹ If No One Returns From Krishna’s Abode Doesn’t That Indicate A Lack Of Freedom
Two Ways Sita And Rama Could Have Reacted While Looking Down From The Aerial Car ›