“Anyone who quits his body, at the end of life, remembering Me, attains immediately to My nature; and there is no doubt of this.” (Lord Krishna, Bhagavad-gita, 8.5)

Friend1:  I know you don’t subscribe to the theory of evolution.

Friend2:  I am glad you appropriately referred to it as just that, a theory.  It is not like a scientific law, such as chemicals mixing together to form a specific compound or how gravity functions.

Friend1:  It is based more or less on mental speculation.  There is some observation, for sure. No experiment, though.  They can’t put a species in a lab and have it automatically generate a new kind of species moving forward.

Friend2:  They study fossil evidence.  They notice similarities over time.  They deduce that the future generations are a product of the previous ones.  They can’t explain how. From my point of view, of course there would be similarities. That is why the Vedas give the number of 8,400,000 different species.

Friend1:  Which is pretty cool.  To start with, you get a scientific explanation.  This means that Vedic culture is much more than a faith.

Friend2:  There is less faith involved than believing in a supposition of pseudo-science; that’s for sure.

Friend1:  I was pondering this question to myself the other day.  Where do you think their evolution ends?

Friend2:  Whose evolution?  A single species? Or the belief from the scientific community?

Friend1:  For the people who subscribe to the theory that one species adapts over time and becomes superior.  Where does that evolution stop? 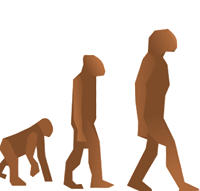 Friend2:  I have no idea. Maybe the fittest of them all?  But I don’t know how they define fitness.

Friend1:  I think survivability.  Being able to defend yourself.  Intelligence.

Friend2:  Well, that invalidates their theory.  The tree survives the longest. There are the roaches that live through a nuclear attack.  This means that the supposedly fitter species, which I assume would include the human beings, are inferior.

Friend1:  In a sense. Think about it for a moment, though. What is their version of the perfect species?

Friend2:  I am assuming that it is one which does not die. Immortality. The Ravana idea. The asura mindset.  Never will happen. You can’t become immortal.  You have to be that way to begin with.

Friend2:  The true end to evolution is mukti.

Friend2:  The end of the cycle of birth and death.  There is real evolution occurring. The individual soul made its way to the auspicious human birth.  The evolution stops when the consciousness is pure while quitting the body. As simple as that. No more complicated.  That’s what spiritual life is for. Genuine religion is for purifying consciousness. That explains everything. The head dresses, the markings on the face, the restriction on diet, the marriage institution, the shifting of priorities, the acknowledgment of inevitable death – take the whole picture and you get an idea of where the evolutionary process should be directed.

Friend1:  Doesn’t that seem too simple, though?  It is like you are giving up. Forgetting science. Foregoing logic and reasoning.

Friend2:  I beg to differ.  We are studying the spiritual science.  We are understanding the purpose of nature.  We learn the reason for the variety in species.  We know the infinite ways time can be passed, without a thought given to the Almighty.  There is nothing easy about achieving mukti. It takes effort. Just see how difficult it is to shake the reliance on the externals.

Friend1:  What do you mean?

Friend2:  We keep thinking that we can do it ourselves.  We had no control over birth. No choice in which family we appeared.  No influence on when the final exit will take place. The wise person would run towards spiritual life, where there is evidence in the form of practical realization, vijnana.  Hear the words of the person who has seen the truth, tattva-darshi, and then make a rational decision yourself.  We know for certain that so many before us have passed on.

Friend1:  Everyone, in fact.  I mean, that is what will happen eventually. 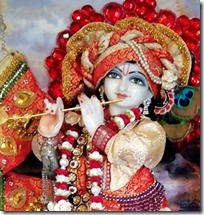 Friend2:  Then consider the best way to spend the time up until then.  Take an interest in the future beyond the svartha.  Take the last step in the evolutionary process and never look back.

On final evolution’s track,
Liberated and not to look back.

Instead of fool’s way,
Where equal with God to say.

On theory developing from mind,
Riddled with flaws to find.

Evolved to this human form met,
For chance at final step to get.

Like Loading...
‹ Four Places Shri Hanuman Gets To Visit
Why So Much Emphasis On Not Criticizing Others ›