What About People Who Literally Follow The Rules And Regulations

“According to the instruction of Lord Krishna, Nanda Maharaja and the cowherd men called in learned brahmanas and began to worship Govardhana Hill by chanting Vedic hymns and offering prasadam. The inhabitants of Vrindavana assembled together, decorated their cows and gave them grass. Keeping the cows in front, they began to circumambulate Govardhana Hill.” (Krishna, The Supreme Personality of Godhead, Vol 1, Ch 24)

Friend1: I’ve heard it said that genuine religion should at the very minimum involve four qualities.

Friend2: I think you are referring to the four regulative principles of the Vaishnava tradition. Restriction on meat eating, gambling, intoxication and illicit sex. Each regulation has a corresponding quality that it produces.

Friend1: Yes, and so any type of religion, doesn’t matter which one you follow, should yield these qualities as a benefit.

Friend2: Not that the change in personal makeup is everything, but it is something like purification prior to entry. Taking a shower before going to work. Fasting before surgery. Precautionary measures.

Friend1: I’m glad you mentioned the shower thing. That is what I wanted to focus on today.

Friend2: You don’t feel like making the effort every single day?

Friend1: No, I am not saying that. What if you run into people that are supposedly religious, strict to their faith and what have you, but they stink.

Friend2: What kind of question is this?

Friend1: Indulge me a little. For whatever reason, this group has discerned that part of their religious faith is not showering.

Friend2: Never or just not often?

Friend2: Yeah, that is a sign of Kali Yuga. People make up religions. They concoct best practices. They don’t use common sense.

Friend1: That is what I was getting to. Don’t you think there should be some mental application? Use your intelligence to reconcile between contradicting recommendations.

Friend2: It is the age-old argument of taking things literally versus understanding the spirit. Even in the Vedas you will find sections that describe remedial measures for transgressing the rules. For instance, if a brahmana drinks alcohol, they are supposed to punish themselves severely and the like.

Friend1: Okay, so what if someone today wants to follow that literally? 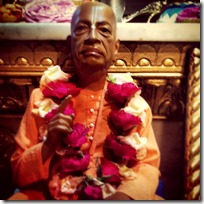 Friend2: That’s why you need the guru, the spiritual master. They apply the lessons to the time and circumstance. They don’t act in a foolish way. Know that every recommendation is made for the purpose of purification. I need compassion in order to better understand God. Cleanliness will help me to better understand the purpose of the creation and our role in this world.

Friend1: I agree with you, but I think people might have a difficult time going beyond the rules that are passed down to them.

Friend1: Even within the Vedic tradition you have people who don’t shave for months at a time. They grow long beards. The hair is long. So many saintly people appear this way.

Friend1: How is that cleanliness, though?

Friend2: It is simpler living. If you stink because you’re not bathing, that’s a different issue.

Friend1: I guess what I am asking is that if I don’t have cleanliness, am I restricted from understanding the Divine?

Friend2: You know the answer to that. No single condition is an automatic qualifier or disqualifier. Otherwise, access to Bhagavan would be limited based on the circumstances of birth and the like.

Friend1: Couldn’t you say the animal birth is a disqualifier?

Friend2: Most of the time, but we know that Chaitanya Mahaprabhu liberated the animals in the wild through His presence. He shared the holy names with people of all levels, high and low births, men and women, children, even.

Friend1: There is also the possibility of criticism. By ignoring a specific rule that has been followed for generations, people will think you are a heretic.

Friend2: Look at the first Govardhana Puja. Shri Krishna started something that went against tradition. People were worried that skipping the Indra-yajna would be dangerous. They were correct, in a sense, but since the replacement was pure devotion to Krishna, everything worked out. They didn’t need to reconcile anything. They offered everything to the hill, which was nondifferent from Nanda’s son. They offered pure food dishes to the hill. They worshiped in the proper mood. They were not looking for anything in return. The rebellious Krishna set the example moving forward, promising protection for anyone who would repeat the worship on an annual basis.

Promise of protection giving,
For those with the tradition living.

That even if rules transgressing,
That hill always blessing.

Because of devotion pure,
For every ailment cure.

Guru the meaning explaining,
So closer to liberation attaining.

Like Loading...
‹ I Am Confused Over The Benefit Of Having A Chaste Wife
Three Types Of Devotees You Can Encounter In Bhakti Life ›