Home › the three › Three Non-Human Heroes Of The Ramayana

Three Non-Human Heroes Of The Ramayana

“Being thus informed, the grandson of King Vena immediately began to follow Indra, who was fleeing through the sky in great haste. He was very angry with him, and he chased him just as the king of the vultures chased Ravana.” (Shrimad Bhagavatam, 4.19.16)

Those familiar with the Vedic tradition, through either family ancestry or voluntary immersion in the culture, notice the similarities when consuming popular fiction film and television. A hero beloved by the community suddenly left alone. A trusted sidekick, ready to protect and defend. A spouse in distress, an unfortunate victim at the hands of a ruthless villain.

Then there are the unexpected assistants. New friends that the hero runs into. They do not know the story for long, but they are willing to give up everything for the sake of the higher cause. The Ramayana is like this, except it is the oldest story in history. Moreover, the authors were not of the creative or imaginative mind. They simply recorded what they witnessed themselves, in the style of beautiful poetry that could also be sung.

He is in the body of a vulture. The distinction is important because according to Vedic teachings all individuals are of the same quality. That wealthy business mogul trying to cure disease on that forgotten continent. That genius who invented the widely utilized programming language. The world’s strongest man, according to fitness evaluations.

They are equal at the core. At the deepest level is the animating spark. This is the spirit soul. So tiny that the size comparison is to the piece of a tip of hair divided into ten thousand parts. A microscopic entity powers both the large and the small.

Jatayu is a spirit soul covered by material elements which form a species we identify as vulture. As spirit soul, the tendency towards service remains. This means that Jatayu follows the natural occupation of dharma in trying to meet the interests of Bhagavan, the Supreme Personality of Godhead.

In the Ramayana, we read how Jatayu valiantly tries to block the path of Ravana, the ten-headed leader of Lanka. Sita Devi is caught in the middle. She is the beloved wife of Shri Rama, the avatara of Bhagavan and from whom the published work gets its name. 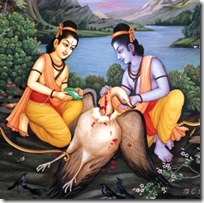 Jatayu is a hero, and surprisingly he does not succeed. Ravana is victorious in their short conflict, which takes place in the air. The twenty arms unleashing sharp weapons are too much for Jatayu to bear. He becomes mortally wounded, and Ravana is able to take Sita back to Lanka, away from her husband.

This is another surprising hero. He is actually one of Ravana’s brothers. He was born with a tendency towards dharma, while his brothers leaned the other way. Vibhishana remained in the kingdom, a disapproving witness to the prevailing way of life.

The last straw was Ravana’s utter defiance of common decency. Vibhishana asked that the brother change his ways. Returning Sita would clear the matter. Rama would forgive. No harm would come. Vibhishana was the only person in the community speaking honestly and for the welfare of Ravana.

The ten-headed one did not listen and so Vibhishana became a turncoat. He went to Rama’s side. Some of the people associated with Sita’s husband were suspicious. Perhaps the enemy had intentions of infiltrating the camp. How could a Rakshasa, a man-eating ogre, be trusted?

He is so dear to Sita and Rama that he has an entire section of the Ramayana dedicated to his activities. It is the book of beauty, Sundara-kanda. Hanuman is in a monkey-type form. He is the one who first meets Rama in the forest of Kishkindha. Rama immediately notices Hanuman’s good qualities and shares his thoughts with Lakshmana.

“He speaks clearly, joyfully, and with a pleasing glow on his face. The heroic Hanuman, son of the wind-god, does not appear to speak anything that is false.” (Lakshmana speaking to Lord Rama about Hanuman, Valmiki Ramayana, Kishkindha Kand, 4.32)

Lakshmana, Rama’s younger brother, concurs. The two decide to ride on Hanuman’s back, as the powerful monkey leaps to the top of Mount Rishyamukha to set up a meeting with Sugriva, the Vanara-king. From there the great alliance is formed, one that will ultimately take down Ravana and return Sita to Rama.

In every case, Rama accepts the service. Even failure for Jatayu turns out to be auspicious. That vulture gazes upon the moonlike face of Dasharatha’s son at the time of death. Vibhishana’s immoral act is actually in line with dharma, and it represents real surrender. Hanuman’s bravery is rewarded to the point that to this day he remains the gatekeeper to Rama’s kingdom, which is the destination for the souls devoted to Him.

Heroes many are found,
In Ramayana’s sacred sound.

Vulture through the air flying,
To obstruct Ravana’s path trying.

Hanuman pivotal in setting up meeting,
All of them Rama happily greeting.