Three Reflections On The Avyakta-Murtina Reference In The Bhagavad-gita

“By Me, in My unmanifested form, this entire universe is pervaded. All beings are in Me, but I am not in them.” (Lord Krishna, Bhagavad-gita, 9.4)

The master presenter. The leader of artistic minds. Capable of mixing different settings to create the greatest contrast. Giving one principle and then revealing a contradicting one moments thereafter. Resolving even the illogical through His brilliance. Offering the best achievement, the perfection of life, purusha-artha, through connection with Him.

That connection is known as yoga, and assimilating the direct words of the Supreme Personality of Godhead, Shri Krishna, is something like a meditative process. There are layers, wherein new understandings and meanings get uncovered the more a person becomes immersed in service to Bhagavan.

In one verse the Sanskrit term used is “avyakta-murtina.” The first word is actually a negation of another. Take the actual object or condition and then do a reverse. As darkness is the absence of light, so avyakta references that which is always there.

1. A way to show a difference between God and the living entities

A sober-minded person would never lump the Vedic tradition into the category of faith or ordinary religion. This is because of the deep philosophical foundation to the culture. Sure, there is the formal acknowledgment of God. Be a supposedly religious person in order to influence a better future. Sacrifice today for a better tomorrow.

At the same time, the more questions a person has, the more answers there are. For instance, what is the relationship between myself and God? How do I relate to other individuals struggling with the same doubts? Am I superior to the animals? What exactly is a living thing?

Shri Krishna explains that through the avyakta-murtina, He goes through the entire creation. God is in every sphere. Not a blade of grass moves without His sanction. He is never absent from any space. This entire collective also includes the living beings. In this way, everything is in Him.

At the same time, He is distinct. God is not one of the components to my existence. I have my hands, my legs, my arms, my face, etc. Those are parts of the body, and I am actually spirit soul. Still, I am limited to a specific area. I have nothing to do with your existence. You are independent from my way of living, also.

2. An intentional invocation to explain a superior concept

Avyakta-murtina is an intentional reference. Upon first consulting Vedic literature, there may be the confusion of equivalence. Since the spirit souls are equal, even amongst the animal community, perhaps I am the same as God. Maybe Divinity is actually the entire collection of spiritual beings, which are something like fragments. The Sanskrit word is amsha.

By referring to the avyakta-murtina, Krishna explains that this is one of His features. That murti, or distinguishable object, which cannot be seen, avyakta. We know that it exists, though. No one will deny that there is a universe. They may not believe in an intelligent designer or a single identity as the source, but they cannot successfully argue against the existence of everything. 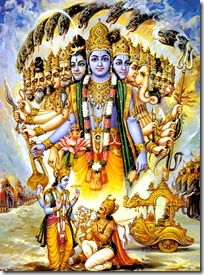 This abstract representation of the full is one way to understand God. He is the avyakta-murtina, but at the same time He is separate from it. If Krishna were the same to everyone, which would include the disciple Arjuna, who is the recipient of these words in the Bhagavad-gita, then He would specifically state that we are the avyakta-murtina. We would be the same as Him, except we just don’t realize it. That, in fact, is never stated, because it is not true.

As there is a murti which is unseen, there is also one that can be seen. Otherwise, the unseen would be the basis of the negation instead of the other way around. The vyakta-murtina is Krishna Himself. This is God the person. This is the original. In a single verse which describes the impersonal form, the Supreme Lord confirms that He is indeed a person.

The arguments of the impersonalists get refuted by two lines of Sanskrit, without a direct reference against them. The vyakta-murtina is thus also the ideal object of worship. If a person simply reads Bhagavad-gita with the intent of connecting with God, by thinking of Him delivering those words to Arjuna, they have succeeded in life.

Avyakta-murtina to use,
Words intentionally to choose.

So that anchor to another,
Meaning superior is the other.

A distinguishable feature where,
But pervading here and everywhere.

That Krishna as God the person to see,
Origin of spirit and matter is He.

Like Loading...
‹ Are You Saying That Vishnu Devotees Are Better Situated Than Others Who Believe In God
Three Deceptive Measures Employed By The Rakshasas ›