“Just as a tree starts to blossom during the proper season, so the doer of sinful deeds inevitably reaps the horrible fruit of their actions at the appropriate time.” (Lord Rama speaking to Khara, Valmiki Ramayana, Aranya Kand, 29.8)

As a fictional psychiatrist character on a television sitcom once told his onscreen brother in a joint therapy session, “No hanging up on the hard ones here,” so in Vedic culture no question is off-limits for the expert teacher.

There is active encouragement to bring doubts to the table. Have them settled by the acharya, the genuine representative in the line of teachers who trace their origin to the person who is without one, anadi.

A person might find it remarkable that many of the most difficult questions actually have a corresponding verse in shastra to provide the answer.

“Don’t just take my word for it. Go and see for yourself. I am not concocting anything. I am simply passing on what others have given to me.”

1. Why do bad people seem to get away with crimes?

“Not just get away, sometimes they thrive. The criminals rise to the highest levels of power, such as in the government. They destroy property after court orders to turn evidence over. They have whistleblowers killed, a warning sign to others if they dare think of speaking out.

“In some local governments today, the criminals get let out of jail after being arrested. They get better treatment than those who abide by the law. It is mind-boggling. And no one seems to care. Everyone is staring at their smartphones and binge-watching television shows. How can God allow this to happen?”

Shri Rama explains that every person eventually gets what is owed to them. If they follow horrible sinful deeds, the punishment is commensurate. The only area of confusion is the timing. In the middle of winter we cannot very well expect the trees to grow leaves. Patience is necessary. Wait for the right time. 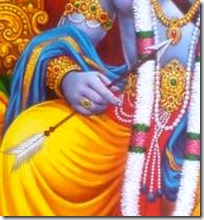 Rama explained this concept to a bad person named Khara. Interestingly, the punishment was moments from arriving. The Rakshasas who had previously killed innocent sages and eaten their flesh were now on the verge of receiving lethal punishment from Rama’s illustrious arrows. Prior to that, they thought they got away with murder; but they were wrong.

Time really is an arbitrary demarcation. We think in terms of youth, adulthood and old age, but in truth we have remained the same person. Just because I went to sleep last night and woke up today doesn’t mean that anything has changed about me.

When considering the possibility of past lives, the structure is prior to the present birth. In a different womb. Maybe not even as a human being. But we can’t remember, so how to be sure?

In the Bhagavad-gita we get confirmation from Shri Krishna. He is acting as guru to the disciple named Arjuna. Krishna tells Arjuna that both of them have lived before. Many, many births, in fact. The distinction is that Krishna can remember those experiences, but Arjuna cannot.

“The Blessed Lord said: Many, many births both you and I have passed. I can remember all of them, but you cannot, O subduer of the enemy!” (Bhagavad-gita, 4.5)

This is the case because Krishna is the Supreme Personality of Godhead. His word alone establishes authority. We can try to make a test of the persistence of spirit for ourselves if we like, but the single verse from shastra is sufficient basis.

3. Will I live again after this life?

There is the issue of past lives. Information for placating curiosity more than anything. What do I really gain through confirmation of past lives? More important is what will occur moving forward. The body is destined for destruction. We see evidence already, as abilities diminish with time.

Again, in a single verse shastra explains so much. Shri Krishna says that the soul is never born and it never dies. Having once been, it never ceases to be. This means that every instance of life is eternal. No one actually gets killed. There is merely a change of body.

4. What is man’s greatest fear?

I am afraid of what will happen on the upcoming exam at school. I need to pass; otherwise so much effort gone to waste. My friend is concerned over the bidding process for a new house. He found a place that his family really likes, but there is competition from other potential buyers.

Another person is afraid of the onset of disease, and their colleague at work has trouble sleeping at night. They fear not getting any rest and having to sit at the office the next day, enduring utter fatigue.

So many concerns, but what is the greatest of all? Shri Rama, who is the same Supreme Lord, identical to Vishnu and Krishna, explains that man has no other fear than death. This is the total end. Every other fear is a subsidiary, related to the larger concern.

The comparison is to the ripened fruit. This explains the absence of the fear in young children. They are not mature, yet. They think that playing all day is fun. They are so happy to be alive. Only with sober, rational thought does a person give consideration to the completion, the end of everything. Then the greatest fear takes hold.

5. Why are there so many religions?

If Bhagavad-gita is so brilliant, why isn’t everyone following Shri Krishna? If the Ramayana has timeless wisdom, answers to life’s most difficult questions, why has not every person read the work? Why isn’t it compulsory in the literature classes for school children?

“…Due to the great variety of desires and natures among human beings, there are many different theistic philosophies of life, which are handed down through tradition, custom and disciplic succession. There are other teachers who directly support atheistic viewpoints.” (Lord Krishna, Shrimad Bhagavatam, 11.14.8)

Amazingly, shastra has an answer to this question. The living entities are the same in constitutional makeup, that of spirit soul, but there is variety in everything else. Consider two people of the same age. They don’t share identical interests. They don’t speak the exact same words every day. They don’t have the same reactions to stimuli.

For every desire there is a corresponding way to meet it. That system then becomes something like a religion. Even the atheists have their teachers, gurus, and exalted guides. Moreover, not everything can be explained to the society at every point in time. A child in school cannot yet grasp algebra, but the instruction they receive in mathematics is equally as valuable. 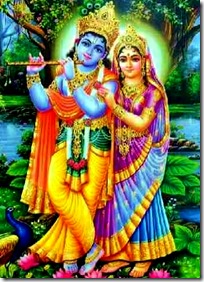 It would make sense that the specific dharma which answers life’s most difficult questions would be the one chosen. In truth, dharma is only one, but that is not realized until a person sees the proper categorization of desires, the dividing line between material and spiritual. Then, the choice is clear, as Krishna leads the way towards eternal, blissful life.

After the many dharmas to see,
How even for atheists to be.

Like Loading...
‹ Three Tasks Where We May Get Filibustered
Four Reasons I Would Not Want To Have Dinner With God ›