“While Vasudeva was carrying his son Krishna in the falling rain, Lord Shesha in the shape of a serpent spread His hood over the head of Vasudeva so that he would not be hampered by the rainfall. Vasudeva came onto the bank of the Yamuna and saw that the water of the Yamuna was roaring with waves and that the whole span was full of foam. Still, in that furious feature, the river gave passage to Vasudeva to cross, just as the great Indian Ocean gave a path to Lord Rama when He was bridging over the gulf.” (Krishna, The Supreme Personality of Godhead, Vol 1, Ch 3)

It really was a nightmare scenario for King Kamsa. He tried his best to deny fate, but the thoughts still haunted him. Even while successfully eliminating any possible opposition in the form of a new child entering this world through the womb of his sister Devaki, there was always the lurking suspicion that the prophecy would come true.

It was an akasha-vani. A voice from the sky. A warning that only the fortunate few are able to receive. It spoke to Kamsa about the future. Devaki’s eighth child would be his doom. Although he was escorting her in the joyous occasion of marriage, she would be the conduit for kala to strike. All-devouring time, in this case with the face of menacing death, would end Kamsa’s reign as king.

It was with such a backdrop that the eighth child eventually arrived. At midnight, while everyone else was asleep, whether peacefully or in constant anxiety, the parents were quite amazed. They saw their newborn transform into the four-handed Narayana. He is the personal God, worshiped particularly by those in the mode of goodness, sattva-guna.

One of the prayers addressed to Him is namo brahmanya-devaya. Vishnu is the deva of the brahmana class. Those who know the difference between matter and spirit, who engage in the occupational role of guide to the rest of society, worship the person who appeared at that moment.

The birth-father, Vasudeva, was of the kshatriya order. These are the warriors, but since he had the devotional spirit, Vasudeva was more than a brahmana. Vishnu is pure goodness, shuddha-sattva, and so the property extends to devotees and their service to Him.

Vasudeva and Devaki were thrilled and amazed. They offered obeisances to their new son, who quickly returned to the visual of a helpless infant. Soon to be known as Krishna, the child wanted to be transported to the nearby town of Gokula.

The paranoid Kamsa would not be able to find Him there. That was the plan, anyways, and Vasudeva intended to fulfill it. He escaped the jail cell and then met the Yamuna River. It was pouring rain, but since the river is also a pure devotee of Krishna, she allowed safe passage. 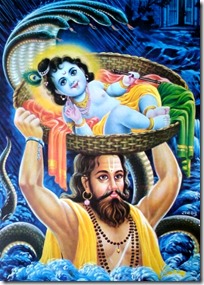 Kamsa’s paranoia continued up until the very end. He sent asuras to eliminate baby Krishna in Gokula, but every attempt failed. It was finally the face of Krishna’s fist which delivered the death blow. As Goswami Tulsidas describes, devotees of Shri Hari are able to sleep peacefully because they know the master coordinator will ultimately settle affairs in the proper manner. Worry and concern and even personal intervention cannot change what is destined to occur.

From nightmare gripping pillow tight,
With slated destiny to fight.

That eighth child the one,
From whom death to come.

Whereas Vasudeva imprisoned so,
But across Yamuna free to go.

With baby Krishna in hand,
And meeting child’s demand.