“While Vasudeva was carrying his son Krishna in the falling rain, Lord Shesha in the shape of a serpent spread His hood over the head of Vasudeva so that he would not be hampered by the rainfall. Vasudeva came onto the bank of the Yamuna and saw that the water of the Yamuna was roaring with waves and that the whole span was full of foam. Still, in that furious feature, the river gave passage to Vasudeva to cross, just as the great Indian Ocean gave a path to Lord Rama when He was bridging over the gulf.” (Krishna, The Supreme Personality of Godhead, Vol 1, Ch 3)

The Sanskrit word is dvija. This means “twice-born.” The target goal for the human being is elevation; a higher destination. No more a life relegated to gratifying the senses, toggling between indulgence and renunciation. A higher potential for intelligence, which always belongs to the individual, who is spirit soul.

The mother and father facilitate the first birth. There is nothing unique in this case. The first birth reoccurs throughout history, in a host of body types. The second birth is of higher value. The human being has the opportunity to become dvija, after the fortunate encounter with the spiritual master, who serves as the father.

The nurturing agent for the dvija is Vedic literature, shastra. Sometimes the father may be in a distant place on business. Perhaps they have other affairs to tend to. In those times the mother is there to help. Reaching liberation, moksha, is not easy, and during moments of difficulty support is vital.

1. The trusted source for resolving doubts

Is God just like us? Is He also Brahman? In many places in Vedic literature, the description is only of the impersonal. If that is the case, how can there be a God? How can there be someone who is both part of Brahman and distinct from it?

The doubt arises through my advancement in the purification of consciousness, and the same shastra is there to settle the doubt. Consulting the sacred text known as Bhagavad-gita, I find consistent reference to the personal, with Sanskrit words like aham and mama.

2. The trusted source for settling contradictions

The concepts of impersonal and personal is one incompatibility. There are more. God is both without eyes and with eyes everywhere. He witnesses everything, though He cannot necessarily see the way that we can.

Through further consultation with shastra, we learn that the personal God witnesses the pain and suffering of His devotees. He is there for them when they call upon Him for help. He is the same witness to sinful activities in the non-devotees. But since they never reach out to Him, He remains neutral, as if He never sees anything.

3. The trusted source of finding relief during a difficult time

The world situation at the moment frightens me. The worst kind of people are rising to power. In countries that boast about the supposed freedom of the people, no one is allowed to speak openly and honestly. Even silence is now taken as tacit approval for some type of behavior that the mob has deemed unacceptable.

I can consult shastra to help get me through. I learn of the situation for Vasudeva and Devaki, the proud parents of an eighth child known as Krishna. They suffered tremendously due to the wicked nature of the king of Mathura. They had to endure the loss of each of their seven children prior. They were stuck in prison.

Yet Krishna still arrived in front of them. The parents received visual confirmation of the personal side of the Divine. They did not simply worship in isolation or without action. Vasudeva made the brave journey across the Yamuna River in the middle of the night. The Supreme Lord helped him to succeed in the mission.

4. The trusted source for inspiration in the continuing fight against illusion

The troubles around me are a product of the illusory energy known as maya. Nothing is fixed. What seems dangerous today will only become worse tomorrow. Today’s issues get replaced with another panic situation in the future. 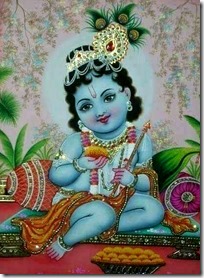 Shastra helps me to maintain proper perspective. I can see things more clearly, even though time has yet to make the full change for my body and the bodies of others. I can see the past, also, as how I have travelled through different births to arrive at this most important time. I have confidence in what the future will hold if I remain on the path of devotion, clinging to the lotus feet of Vasudeva’s son.

So much already done,
But now with Vasudeva’s son.

Across the ocean to bring,
Like father the son with him.

That birth and death no more,
Eternal living in store.

Like Loading...
‹ Why Do People In The Present Day Have It So Easy
Two Meanings To The Word Vasudevaya ›

Categories: crossing the yamuna, the four