Is Hanuman’s Heart The Same As Everyone Else’s

“O sinless one, certainly, how can any king accomplish his objectives if he doesn’t have such a messenger working for him?” (Shri Rama speaking to Lakshmana, Valmiki Ramayana, Kishkindha Kand, 3.34)

“You see many images of Shri Hanuman if you are living within Vedic society. This could be at a temple environment or someplace where everyone is naturally devoted to the principles of sanatana-dharma, as passed down through the generations.

“The mistaken assumption is that the tradition is polytheistic, but in truth there is only one Supreme. The distinction is that He is described in countless ways. The recounting of His past achievements, His endless glories, and the promise of His future mercy delivered to the surrendered souls continues to this day, and so the volume of published Vedic literature is ever-expanding.

“Within that tradition, those devoted to the Supreme also receive ample glorification. Hanuman falls within that category. He is known as the greatest devotee of God’s incarnation on earth of Shri Ramachandra, the prince of Ayodhya.

“One image I am particularly fond of shows Hanuman down on one knee, tearing open his chest with his hands. Inside are the Divine couple, Sita and Rama. I understand this is meant to be symbolic, but is it not the same for everyone? Is not God within the heart? Why this image only for Hanuman and not others?” 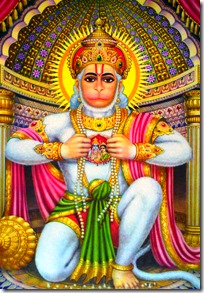 The truth cannot be denied. It is as basic as any other law of science which man has discovered. The core of living lies within the heart. The battery, the power supply, the spark, so to speak, of any living thing is the spirit soul. This fragment of the original and total spiritual energy has tremendous potency.

The same sized soul powers both the human being and the elephant. The tiny ant and the large tree standing in the forest for thousands of years. The person equipped with expert intelligence to solve complex math equations and the elephant of tremendous strength.

The soul is responsible for the vibrancy; its presence is what indicates life. The soul is within the heart, and close by is another instance of spirit. This is the identity of the Supreme Lord. In this feature He is known as Paramatma. Supersoul. He expands for every living thing, but His identity remains one. He is not divided, though it appears that way.

Another distinction with the Supersoul is interest. In this feature God is a neutral observer, which explains how one person can take to criminal activity and another chooses to defend the innocent. Both the burglar and the police officer have Supersoul inside of them, sanctioning the choice to behave in a certain way.

The image of Hanuman shows explicit devotion to the personal feature of the Almighty. Beyond Supersoul, someone who does take an interest in affairs. In the personal form, Supersoul is known as Bhagavan. He always has His pleasure potency next to Him. This is the goddess of fortune.

Hanuman worships Bhagavan as Shri Rama, who is accompanied by Sita Devi. The devotion is pure, steady, and without motivation. Hanuman is always ready to serve, and reciprocation does not factor into his decision. He gives rather than takes. He wants nothing for himself. His life and soul are Sita and Rama.

The image serves as inspiration for others, who want to be liberated in the same way, who are seeking a well-wisher without flaws, who maintains His companionship from lifetime to lifetime. Hanuman has the best qualifications, as confirmed one time by Rama to His younger brother Lakshmana. Hanuman was in the role of chief minister to the Vanara-king named Sugriva.

Rama rhetorically questioned how any king could get their work accomplished without having a trusted aide like Hanuman in their corner. It is quite difficult, but thankfully that fearless servant is still in this world to provide guidance, for helping us to cross the finish line in the battle against repeated birth and death.

Not for chance to await,
Hero in perpetually ready state.

Whether from mountain to descend,
Or part of platoon to send.

For the earth searching through,
Propelled ocean over Lanka to.

Always in same way to proceed,
Hanuman our inspiration indeed.

Like Loading...
‹ Five Things My Supposedly Satanic Leader Taught Me
Isn’t There A Glaring Flaw With Viewing God As An Order Supplier ›