Home › sita identifying herself › The Forest From The Trees

The Forest From The Trees

“O ill-fated Rakshasa, since you wish to take away the beloved wife of Raghava [Rama], surely all these trees must appear to you as made of gold.” (Sita Devi speaking to Ravana, Valmiki Ramayana, Aranya Kand, 47.38)

Download this episode (right click and save)
Ravana, the Rakshasa demon king, was so taken away by passion, that he desired to steal away the beautiful wife of Lord Rama, Sita Devi. Sita was the epitome of virtue, as was Rama. Lord Krishna is the Supreme Personality of Godhead, who appears on earth from time to time to annihilate the miscreants and give protection to the devotees. Lord Rama was one such incarnation, and He enjoyed many great pastimes with Sita and His younger brother, Lakshmana. On one occasion, the group’s hermitage in the forest of Dandaka was visited by Ravana. Rama and Lakshmana were away from the cottage at the time, so Ravana used the opportunity to proposition Sita. In the above referenced statement, Sita is sternly rebuking the Rakshasa, telling him that he must be deluded in thinking that he could ever have God’s wife. He must also be mistaking normal trees to be made of gold, which also means that death was surely approaching him, for only a dying person would start to see everything around him as made of gold.

These words uttered by Sita certainly were true. Kama, or sense gratification, is certainly a part of regulated material life, for there is even a famous book known as the Kama Sutra, which details the act of satisfying the senses through sex life. Nevertheless, if kama is left unchecked, it can lead to delusion, madness, and a general straying from the principles of dharma. This was precisely the case with Ravana, a ten-headed demon who terrorized the world during the Treta Yuga, the second time period of creation. Rakshasas are a human-like species which live off meat eating, illicit sex, and drinking wine. Ravana was still religious nonetheless, so he performed many great austerities to please the demigods. His style of worship was performed in the mode of ignorance, however. The mode of darkness, or ignorance, is characterized by any activity which lacks intelligence, knowledge, or fruitive activity. In essence, the mode of darkness brings one further and further away from God, often times resulting in demotion to a lower species in the next life.

Ravana certainly performed great austerities involving self-control and the self-infliction of pain. As a result, Lord Brahma granted him any boons of his choosing. Ravana, being deluded by his ignorance, used these boons to increase his material strength and fame. He was given invincibility in battle against any celestial and animal. Normally, such a boon would be a great thing for a king, because it would mean that they could adequately provide protection to their citizens. Ravana, however, used his strength to terrorize other demigods, essentially Lord Brahma’s associates and friends. Ravana defeated his own brother in battle, Kuvera. There was no reason for this fighting except for the fact that Ravana wanted to be God. By definition, God is the most powerful, wise, famous, and beautiful. Ravana didn’t believe in a higher power, for he thought the demigods represented the upper limit of opulence. By defeating them in battle, Ravana thought himself to be God. 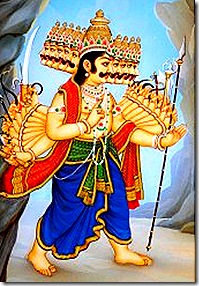 Aside from terrorizing the innocent, Ravana engaged in all sorts of other sinful activity. The Rakshasas of his kingdom were always drinking wine. Through his various conquests of other kingdoms, Ravana had amassed a great collection of beautiful wives. He would always engage in sexual activity with them, with Mandodari being his chief wife. These women were all very beautiful, and anyone would kill to have them as a spouse. Nevertheless, Ravana wasn’t satisfied. This is the danger of kama. Life on earth is meant for realizing God and not for simply satisfying the senses. For this reason the Vedas recommend that we regulate kama as much as possible.

Lord Rama, as part of His pastimes, travelled the forests of India at the same time that Ravana was ruling over his kingdom of Lanka. The demigods had actually petitioned Lord Vishnu, God Himself, to come to earth in human form to kill Ravana and alleviate their suffering. In his haste, Ravana forgot to ask Lord Brahma for immunity from human beings. Ravana never thought that a mere mortal could ever defeat him in battle. Using this loophole, God came to earth as a human in Rama. The Lord was living in the forest of Dandaka with Sita and Lakshmana when the group was attacked by Ravana’s band of Rakshasas. Rama was an expert kshatriya warrior, so He easily defeated all 14,000 of Ravana’s Rakshasa associates.

Angered by this, Ravana decided to kidnap Sita as retaliation. More than just getting revenge on Rama, Ravana heard of Sita’s beauty and decided that he must have her. This shows the seductiveness of kama. Simply by hearing of another’s beauty, Ravana was taken off the righteous path. Even by today’s standards, forcibly stealing another’s wife is considered a deplorable act. Athletes and famous celebrities who get caught in extramarital affairs are scorned by the public. By the standard of material life, Ravana should have been happy and content. Even in today’s world, we see that illicit sex, meat eating, gambling, and intoxication are very common. Abortion is allowed in America, as is cow slaughter. It is a sinner’s paradise, so the atheists should be happy. But we see that is not the case. More than any other group, the atheists are the most miserable among us.

Again, this is because human life is meant for the cultivation of knowledge. Not just any knowledge; raja-vidya, the king of education dealing with the soul and its relationship with God. The material body that we currently occupy is subject to creation and destruction. However opulent we may be or however much we may satisfy our senses, our experiences here are only temporary. The spirit soul which resides within the body, the atma, is eternal. Since the soul never takes birth and never dies, it must have a natural home. The Vedas tell us that this home is in the spiritual world alongside the Supreme Personality of Godhead, Lord Shri Krishna. Ishvara parama krishna, the Supreme Controller is Lord Krishna. Perfection in life is achieved when the spirit soul returns to one of Krishna’s spiritual planets in Krishnaloka or Vaikunthaloka.

Sinful life is harmful because it takes us off the straightened path. All activities should be performed with the aim of returning to God’s spiritual kingdom. Any activity which keeps us bound to the cycle of birth and death is considered sinful. The height of sinful life is illicit sex, a byproduct of uncontrolled kama. We see that Ravana’s sinful life led him to falsely believing he could have Rama’s wife, i.e. taking ordinary trees to be made of gold. This is the definition of maya, taking something to be what it is not. For the devotees, the opposite situation occurs. They end up seeing the trees, and everything else in the creation, as being God’s property. This is the proper way to view things. The Vedanta-sutras tell us that the Supreme Absolute Truth is the original source of everything. All things that we see in this life, matter and spirit, sprouted from the breathing of Lord Narayana at the beginning of time.

The best occupation for the living entity is devotional service, or bhakti-yoga. Kama involves satisfying our own senses, but bhakti-yoga aims to please God. This isn’t an artificial engagement either. The spirit soul is naturally inclined to performing devotional service. This was the path taken by Sita Devi, Rama’s wife. She performed all nine processes of devotional service perfectly. Sita always recited Rama’s name, offered Him prayers, remembered Him at all times, served His lotus feet, became His friend, and surrendered everything unto Him. As a result of her service, she viewed all living entities equally. When Ravana first approached her, he was in the guise of a brahmana, or mendicant. Sita immediately welcomed him and openly declared that everything she had in her possession was intended for the brahmana’s benefit. Her husband was away from the cottage at the time, so she was a little distressed, but she didn’t let that stand in the way of welcoming a guest.

The lesson here is that we should follow the path of Sita Devi and not that of Ravana. Unrestricted kama will lead to our downfall. Unfortunately, Ravana would not heed the advice given to him by Sita. He would forcibly kidnap Sita, an act which ultimately led to his death. Not only was he never able to bring Sita under his control, but Ravana would lose everything when Rama and His army arrived at his kingdom of Lanka. Rama would defeat and kill Ravana, and install Ravana’s brother, Vibhishana, as the new king. Those who follow the path of devotional service will never have to worry about delusion. By regularly chanting God’s names, “Hare Krishna Hare Krishna, Krishna Krishna, Hare Hare, Hare Rama Hare Rama, Rama Rama, Hare Hare”, we can see the forest from the trees and see that everlasting happiness can only come through association with the Supreme Lord.