“He speaks clearly, joyfully, and with a pleasing glow on his face. The heroic Hanuman, son of the wind-god, does not appear to speak anything that is false.” (Lakshmana speaking to Lord Rama about Hanuman, Valmiki Ramayana, Kishkindha Kand, 4.32)

In this passage, Shri Hanuman is receiving the highest praise one could ever hope to get: a personal testimony of character given by the Supreme Lord’s direct representative. The representative of God is known as the guru, or spiritual master. In this instance, the guru takes the form of Shri Lakshmana, the younger brother of Lord Rama. From Vedic authority, we understand that Lakshmana is an incarnation of Lord Ananta Shesha Naga, God’s protector in the spiritual world. Lord Anantadeva also appears in other eras in different forms such as Lord Balarama and Lord Nityananda, but regardless of the time or circumstance, he is considered the eternal representative and protector of the interests of the Supreme Lord. Anantadeva’s representative is the bona fide guru, one who follows the same dedication to devotional service as that shown by Shri Lakshmana. Bearing this in mind, Hanuman’s high character is substantiated, for he received great praise from someone as exalted as Lakshmana. 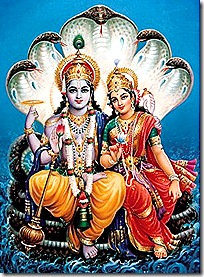 A guru in the common vernacular is taken to be an expert. The original Sanskrit meaning to the word is “heavy”. The guru is heavy because he carries the message of God and also because His authority carries great weight. We can think of it in terms of gravitas; the guru carries the highest stature and reputation. This status is earned through acts of devotion to the Supreme Lord and protection of His interests. Why would God, the all-powerful creator and progenitor of all forms of life, need protection? Services are offered voluntarily by the guru as a way of keeping unscrupulous commentators and miscreants from distorting God’s position as the supreme personal controller over all that exists. The guru feels this protection is necessary since many man-made theories pertaining to the origin of life have sprouted into existence since the beginning of time. Aside from those who outwardly deny the existence of God, there are others who refuse to acknowledge that He has an eternal form which is full of bliss and knowledge. The bona fide guru, the most reputed among those carrying spiritual wisdom, not only acknowledges the existence of their supreme object of worship, but they fearlessly and openly declare their dedication to such a divine being.

In this regard, the guru, the spiritual master and wielder of the heaviest knowledge, is the person we must approach in order to receive God’s favor. In the conditioned state, we are incapable of conceptualizing the nature of the Supreme Lord; therefore we must take knowledge from someone who has already seen Him. More than just seeing God, the guru dedicates their life to serving the Supreme Lord. Lakshmana is the origin of the guru system, and all other bona fide gurus can trace their spiritual ancestry to him. Just as we have our own biological ancestry which dates back many generations, one’s spiritual lineage, in order to carry any weight, must trace all the way back to God. If a spiritual guide is lacking such a connection in relation to the teachings they offer, their system of spiritual life must have been concocted by someone other than God or one of His direct representatives.

Since the guru is the authorized representative of God, he is given full control in determining whether or not a person is worthy of serving the Lord directly. We can think of the guru as the Secretary of State or Chief Minister of the Supreme Lord. God doesn’t need to waste His time with people who aren’t sincere, so He sends the spiritual master to extract the contenders from the masses of pretenders. The behavior of the ideal spiritual master must be exhibited on this earth from time to time in order for a frame of reference to be established. One such manifestation occurred many thousands of years ago during the Treta Yuga when the Supreme Absolute Truth, the personal Lord of creation, descended to earth in a human form as Lord Rama.

Just as Lakshmana was an incarnation of Anantadeva, Rama was an incarnation of Lord Vishnu, whom Anantadeva gives comfort and protection to in the spiritual world. Vishnu is a plenary expansion of Lord Krishna, the Supreme Personality of Godhead, the one and only God that all of us look to in times of trouble. As part of Rama’s pastimes on earth, He roamed the forests of India for fourteen years. One particular event, the kidnapping of His wife Sita Devi, led Rama to the Kishkindha forest, which was inhabited by Vanaras at the time. In Sanskrit, vana refers to a forest, so a vanara is one who dwells in the forest. Naturally, in order to live in the forest, one needs a body which is made to live in the outdoors and the wilderness. Therefore the Vanaras possessed bodies similar to those of monkeys, though they were also quite human-like. A Vanara isn’t a mythological figure, but rather an advanced form of monkey which existed on earth many thousands of years ago.

The chief of the Vanaras living in Kishkindha was Sugriva. Seeing Rama and Lakshmana approaching, Sugriva asked his chief minister, Hanuman, to go see what the two princes wanted. Rama and Lakshmana belonged to the royal order; they were expert warriors who used the bow and arrow as their weapon. Sugriva saw the two princes and became fearful that they might have come to kill him. Hanuman approached Rama and Lakshmana while in the guise of a mendicant. After exchanging nice words, Hanuman revealed his identity and formed a friendship with Rama and Lakshmana. After this, Lakshmana explained the circumstances for their arrival in Kishkindha. Sita had been kidnapped by a Rakshasa demon, and another Rakshasa-bodied individual named Danu informed the brothers that Sugriva would be able to help them. Even before Hanuman had approached them, Rama and Lakshmana were desirous of forming an alliance with Sugriva.

Hanuman was quite pleased to hear this, for Sugriva had been thrown out of his own kingdom by his brother Vali. Therefore he could also use Rama’s help in regaining his own kingdom. The two kings could end up helping each other, a sort of “I scratch your back, you scratch mine” deal. Hanuman eagerly and kindly apprised Rama and Lakshmana of this potential mutually beneficial relationship. Upon hearing Hanuman’s words, Lakshmana spoke the above referenced quote to Rama. From his words, we see that Lakshmana was quite impressed by Hanuman, and he could tell right away that the Vanara possessed the highest character. 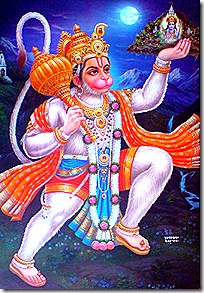 Lakshmana says that Hanuman spoke with a delightful countenance. This means that he was quite happy to serve Rama and Lakshmana. This is the key ingredient of devotional service, or bhakti-yoga. The Vedas tell us that the ultimate goal in life is to be situated in perfect yoga, which is the unbridled union of the soul with God. There are different ways to achieve this union, but bhakti is considered the topmost because it is the yoga of love and something the living entities are naturally inclined towards. In its purified state, the soul is always in union with God in a loving way, similar to how an ideal couple is always together. In order to practice bhakti-yoga perfectly, one must be eager to rekindle their forgotten bond with the Supreme Lord. In this respect, we see that Hanuman was the most eager, and that his enthusiasm couldn’t be held in. When someone is very happy, it usually shows in their demeanor. Happiness and ebullience are hard to keep bottled inside, so from Hanuman’s mannerisms, Lakshmana could tell how sincere his desire to serve Rama was.

Lakshmana’s statement also tells us that Hanuman is both heroic [viro] and truthful. In fact, one of Hanuman’s other names is Mahavira, which means one who is very heroic and powerful. How great must Hanuman be for Lakshmana to decipher these characteristics from only meeting him for a few minutes? It is no surprise that Hanuman today is regarded as the most celebrated figure of the Vedic tradition, for the original spiritual master himself, Shri Lakshmana, vouches for his character. If we take Hanuman’s eagerness to serve Rama, along with his inability to tell a lie, what we get is the most exalted servant of the Supreme Lord. Truthfulness is important because if a person is dishonest, all of their associated attributes are put into doubt. By stating that Hanuman was incapable of telling a lie, Lakshmana declares that it is impossible for Hanuman’s eagerness to be fake or conjured up. Prior to this, Hanuman noted that Sugriva and the other Vanaras would surely help the two brothers find Sita. Combining this with Lakshmana’s assessment of Hanuman’s honesty, we see that success of Rama’s mission was guaranteed simply from the words of Hanuman.

Lakshmana’s assertions would be validated by the events that followed. To this day, Shri Hanuman is considered Rama’s greatest devotee, a supreme authority figure on honor, integrity, courage, scholarship, and most of all, devotion to God. Anyone who kindly approaches Shri Hanuman and asks for his blessings will surely find their way to God. Hanuman remains Rama, Lakshmana, and Sita’s favorite person, so we can never go wrong by associating with such a wonderful individual. Shri Hanuman is deserving of the highest praise, for he is the most eager and sincere servant of God, someone who is incapable of diverting his interests.