“When he heard this, the muni said with love and excitement, ‘O king, these children are the appearance of your spiritual profit; they are the very Brahman.’” (Janaki Mangala, 46)

Brahman is the Supreme Absolute Truth. It is beyond duality. Whatever we see in front of us has two sides. There is the visual aspect given off to the perceiver, and there is also the actual constitutional position. From afar, we can capture the sun between our two fingers squished together, but in reality the sun’s size is massive. We cannot even get very close to the sun, for its heat would be too much to bear. On a hot day in the summer the heat coming from the sun causes us tremendous pain, and this is just the effect from thousands of miles away. Thus based on a visual image alone we can’t get a full understanding of something. Take the same principle and apply it to every single object and you get an idea of the strong presence of duality in the world we presently inhabit. Brahman is truth. It is not two-sided; it is not favorable to one individual and unfavorable to another. Though it lacks duality, Brahman still has a tangible form, a fact realized through practice in bhakti-yoga, or devotional service.

Why would someone think that Brahman is formless? For starters, the presence of a form sort of indicates a defect. If I see someone who is tall, that attribute automatically means that they are not short. Every feature is the negation of some other feature. Someone who is right-handed is not left-handed; though it is possible to be ambidextrous, but again that eliminates the attribute of either hand being dominant. A male cannot be a female and vice versa.

Brahman is pure spirit; it is not related to the temporary forms that the spirit souls occupy during their travels through reincarnation. Learning about Brahman is rare enough, but putting that information to good use is on a completely different level. I can tell myself that I am spirit and not matter but if my actions are based on the designations formed off of outward appearances, my acknowledgment doesn’t mean that much. It’s sort of like saying that you’re religious and then going out and killing innocent creatures, either human beings or animals. An innocent life is an innocent life, regardless of whether it’s flesh tastes good or if it serves as a nuisance to others. 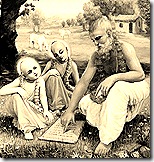 In the Vedic tradition, the steps required for understanding Brahman are difficult to follow. Therefore the education and training start from a very young age, where the students are sent to live with a spiritual master. Before there is a specific instruction offered on the differences between matter and spirit, the students learn to live with austerity, eating only what is necessary to maintain the body and not being puffed up by false prestige. A simple dress and shaved head help to reinforce those principles. Since the purpose of the training is to understand Brahman, the students are known as brahmacharis.

Going forward, a person who went through brahmacharya can rely on the training they received previously, as it is more difficult to understand Brahman during adulthood. For a king especially, not having attachment to outcomes is quite difficult. If it is my duty to protect the innocent people of the state and fight with the evil elements when necessary, how will dispassion help me? Should I not be passionate about carrying out my duties? Is not desire a necessary ingredient to success?

A king who is detached while simultaneously taking care of his obligations is very rare, which gives us an idea of why King Janaka is still talked about to this day. He practiced the principles of brahmacharya though he was a householder ruling over the kingdom of Mithila. He had no attachment to anything related to his body but he carried out his duties to preserve the good name of his family and to protect the citizens.

Detachment helps to further the realization of Brahman, and the purpose of knowing Brahman is to feel happiness. That pleasure of contemplating Brahman is known as brahmananda or brahmasukha. Janaka regularly felt this happiness because his consciousness never broke from Brahman. He knew that the body is a temporary vessel to be used to carry the wayward spirit soul back to its original constitutional position. Every living entity is meant to be God conscious, but through the influence of duality that awareness is missing, or at least temporarily forgotten.

Time’s influence on the mind also helps to further the illusion. We may be worried about what will happen tomorrow at work, but within a few short weeks that same period of time will be forgotten. In the grand scheme of things our duration of life is nothing. The spirit soul has travelled through many bodies in the past, so there is no need to pay too much attention to the immediate future. The soul will live on, so where it ends up after death becomes vitally important, especially if that destination can be a permanent one.

Knowledge of Brahman brings the realization of God’s impersonal feature, which in turn allows for release from the cycle of birth and death. But Brahman does have a form, a fact which can be accepted with certainty through training in the ultimate discipline of bhakti-yoga. In the above referenced verse from the Janaki Mangala we get an idea of what Brahman’s form looks like. The same dispassionate Janaka had the great fortune of hosting a grand sacrifice to determine the husband for his unmarried daughter Sita. Many princes from around the world came to attempt to lift Lord Shiva’s bow, but it was a pair of brothers that really got Janaka’s attention. 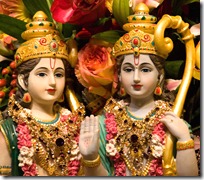 They hadn’t come specifically for the contest. They were escorting the exalted Vishvamitra Muni through the forests at the time. Janaka welcomed Vishvamitra as a good king should. The brahmanas, the members of the priestly class who know Brahman, are held in high esteem by the saintly kings. When he saw Rama and Lakshmana, Janaka’s happiness was unimaginable. He had felt brahmasukha before, but this happiness far surpassed that. Previously he was worried about paramartha, or spiritual profit, benefits which relate to the afterlife, but now seeing Rama and Lakshmana he wanted to only focus on svartha, or worldly interests, namely in looking at them.

Vishvamitra alleviated the king’s concerns by telling him that the two boys were indeed manifestations of Brahman. In this way what Janaka thought to be svartha was actually paramartha. The Supreme Lord has that effect on people when they view Him in the proper way. Brahman is but an angle of vision applied to Bhagavan, the Supreme Personality of Godhead. Just as one way we can understand the sun is to notice the sunshine, one way of understanding God is to learn about Brahman and practice the principles that help one to attain the Brahman realization.

Our level of understanding doesn’t have an effect on the actual position of Bhagavan, though. He is beyond duality, so His spiritual form is not anything like the temporary forms that the jivas, or individual souls, accept and reject. Within the form of a young man Bhagavan can capture the hearts of the liberated souls. Lakshmana is practically equivalent to Bhagavan, as he is the Lord’s number one servant, always by His side. Thus Janaka got the true fruit of his pious acts by seeing Rama and Lakshmana and harboring spontaneous affection for them.

A point may be raised that if Brahman has a form that is Rama and Lakshmana, why is it said that Lord Krishna and Lord Vishnu also represent Bhagavan? What about all the different avataras of Vishnu? Bhagavan has an original form, which is taken to be Lord Krishna in the Vedic tradition. Vishnu is also sometimes considered the original, though the two are identical. One personality has four hands and the other two, but for all intents and purposes they are the same. The avataras are also non-different from Bhagavan; thus to say that Rama is the source of Brahman is accurate. 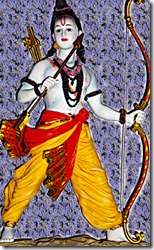 Just because there are many forms doesn’t mean that Bhagavan is formless or that the living entities are Bhagavan. With His spiritual forms the Supreme Lord can do things ordinary forms can’t. As a young child in Vrindavana, He lifted up a massive hill and held it over His head for seven consecutive days. As a young prince in Janaka’s kingdom, Rama lifted Lord Shiva’s bow and easily strung it. In fact, Lord Shiva has emphatically warned against thinking that Rama has a material body, declaring the mindset to be the pathway to doom. Bhagavan can eat with His ears, talk with His hands, see with His feet, etc. He is formless in the sense that His form is not limited in its abilities, but the form still exists.

King Janaka got to bask in the sweet vision of Rama and Lakshmana, and that provided a benefit that stayed with him after the fact. Paramartha and svartha become identical when the individual is immersed in bhakti-yoga and regularly chants the holy names, “Hare Krishna Hare Krishna, Krishna Krishna, Hare Hare, Hare Rama Hare Rama, Rama Rama, Hare Hare”. To the followers of bhakti, the true form of Brahman is one day revealed, and it is a sight worth waiting for.

In material nature everything with an aspect dual,

Good to some bad to others, with illusion it does fool.

But beyond duality is Brahman, a truth that is absolute,

Realize it by accepting the knowledge and austerity route.

Because elders difficult to teach, with change they are done,

Brahmacharya principles imbibed on those who are young.

King Janaka of Mithila dispassion his rule of life he made.

Though in royal opulence above duality he stayed.

But seeing muni’s protectors that were charming,

Muni these doubts of the king to relieve,

“Rama and Lakshmana are Brahman, this fact you believe.”