“Shri Chaitanya Mahaprabhu considered, ‘Where has such a taste in this prasada come from? Certainly it is due to its having been touched by the nectar of Krishna’s lips.’” (Chaitanya Charitamrita, Antya 16.94)

One of the benefits of visiting a temple where Shri Krishna or one of His non-different expansions is worshiped is the prasadam distribution. The deity is non-different from the worshiped personality, as the process is authorized since time immemorial. At the end of the Shrimad Bhagavatam, Krishna Himself briefly touches on the principles behind deity worship and how it is to be performed. Even prior to that time, the tradition of worshiping a statue made of wood, stone, or resin existed, and when performed properly the worshipers derived tremendous transcendental benefits. The combination of sincerity and purity in items offered returns a potent potion to feed the spiritual hunger that everyone has inside of them.

How do we know there is a spiritual hunger? Material hunger can never bring full satisfaction. This is because our identity does not come from the material elements that surround the soul. The eyes, ears, legs and hands are body parts, so they help us to act, feel and will, but they do not determine our existence. Any one of these parts can go out of commission, either temporarily or permanently, and that automatically doesn’t stop our existence. Relying solely on sense satisfaction fails to bring real pleasure, as the soul inside is what craves ananda, or bliss.

Spiritual hunger is fed through yoga, or connection of the individual soul with the Supreme Soul. As this connection is difficult to maintain in a land where the inferior energy known as material nature is mistakenly assumed to be superior, there are various tools of implementation to help the suffering individual. Deity worship is one such tool, and when it is utilized as part of an overall discipline of bhakti-yoga, it alone can lead to perfection.

Can you have deity worship outside of bhakti? Bhakti is love of the divine variety. It is different from what we normally consider to be love, which is usually lust or some emotion tied to the ego. For instance, we think we love someone else, but usually the sentiment is tied to an emotional response we receive. Our significant other makes us feel good. They act in a way that brings pleasure to the heart; hence we think we love them. But when they cease to behave in such a manner, the loving sentiment changes. Therefore the original emotion can not be classified as real love, which cannot depend on reciprocation.

Real love exists only in bhakti, which is devotion to God. You can have devotion to many other divine figures, but that sort of relationship is similar to the friendships we form in everyday life. Worshiping a deity of a divine personality who provides temporary material rewards is akin to conducting a business transaction; so bhakti in this case is absent.

In the deity worship authorized by the respected figures who take charge in teaching bhakti-yoga, the sole desire is to love God. Even if there is impurity mixed in at the beginning, since the object of worship is God Himself, the original Personality, eventually the impurities will be removed, provided the worship continues in sincerity and in an authorized manner.

To stand in front of the deity and stare at it is one way to worship. Another way is to offer obeisances, such as bowing down in front. Another way is to offer prayers, sort of like talking to God. Part of this worshiping process, which is known as archanam, is offering pure items to the deity’s liking. In the Vedic tradition the Supreme Lord in His original form is known as Krishna, and He has kindly told us what items He prefers.

“If one offers Me with love and devotion a leaf, a flower, fruit, or water, I will accept it.”  (Lord Krishna, Bhagavad-gita, 9.26)

In the Bhagavad-gita, Krishna says that if someone offers Him a leaf, a flower, a fruit, or some water with love, He will accept the offering. Krishna doesn’t require food to eat, as He is entirely self-sufficient. If He so desires, He can create thousands of fruit bearing trees in an instant. He can also create a mechanism to pick the fruits and bring them to Him. With the offerings from the devotees, Krishna does not consume everything. In fact, to the worshiper, it appears that Krishna doesn’t eat at all, as the food remains right where it is.

But in reality, the Supreme Lord puts His glance on the food, and it is considered eaten by Him. What gets returned to the worshiper can be considered leftovers. Normally, such a practice is quite repugnant, akin to getting back a sandwich that is half-eaten by someone else. The food has been in someone else’s mouth and it has their saliva on it, so why would we want to touch it? 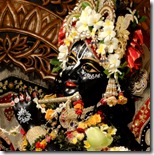 But with Krishna prasadam, the same contact has a purifying effect. Indeed, such remnants are available from the spiritual master’s food as well, offering the disciple a wonderful chance to make rapid progress in their devotional practices. The anchor that keeps one firmly fixed to the material creation is the false ego, which takes the individual self to be the enjoyer and the material elements to be a vehicle for that enjoyment. Under a pure ego, the individual rightfully identifies as a servant of God and then uses the same material nature for the Lord’s pleasure. The spiritual master is God’s representative, so he is to be treated as good as the Lord, though he is never actually equal to Him.

When Krishna appeared on earth as Lord Chaitanya, He relished the role of servant of God. He would take the prasadam of Lord Jagannatha at the temple in Puri. Due to the intoxicating taste, Lord Chaitanya would know that the food had indeed touched Krishna’s lips. This is the magic that exists in all aspects of bhakti-yoga, as the names of the Supreme Lord also originally descend from the Lord’s lips. So, by chanting the holy names, “Hare Krishna Hare Krishna, Krishna Krishna, Hare Hare, Hare Rama Hare Rama, Rama Rama, Hare Hare”, one can relish a similar taste, except this time the tongue produces the nectar and the ears then consume it. This mantra is regularly heard in Krishna temples, where sumptuous prasadam is also available, allowing any person to rapidly progress in meeting life’s ultimate aim.

The gift of the tongue let me not waste,

Food that Krishna’s lips have touched,

The Lord glances and then leaves behind the rest,

Acquiring taste then that is the best.

Not a tale, this explanation with sincerity buy,

Visit Krishna temple and for yourself try.

Chant often and bring nectar to the ear.