“He who reads this beautiful ashtakam of the sweet pastimes of Kunja-vihari receives the best fortune of attachment to the worship of the lotus feet of the Lord.” (Shrila Rupa Gosvami, Shri Kunja-vihary-astakam, 9)

What is the best fortune? If there is one thing you could be guaranteed of having, what would it be? Would it be endless wealth? A loving family? A lofty position of prominence that garnered attention from the adoring public? According to the wise Vedic seers, the greatest fortune is loving devotion to the lotus feet of the Supreme Personality of Godhead. The reason: His attractiveness, which includes His sweet pastimes, which are described by the parrot-like saints like Shrila Rupa Gosvami.

Let’s take a look at some other fortunes first. The government typically looks to distribute fortunes to those who are lacking them. “Help the poor. It is not fair that there are so many millionaires and so many people struggling. In a fair world, the rich would pay more in taxes so that the downtrodden could benefit. Aiding the struggling, poverty stricken person will help to better their condition and make for a more peaceful and just society.” This is the common sentiment from politicians since time immemorial, spanning all political parties and nations.

Yet what does following through on this actually do? A person has to work to maintain the living they have. To say that you will make things fair in this sense is to say that one person’s work will be partially used to sustain another person’s lifestyle. Instead of a person working to maintain themselves, someone else will work for them. And that someone else has no say in the matter. Just because of the relative concept of fairness, they are forced to go to work to give some of the fruits to someone else.

The recipient doesn’t receive any tangible benefit, either, for if you really wanted to help a destitute person you would bring them into your home, feed them, and then help them get back on their feet. Another way to fix the problem would be to give the struggling person a job. This way the poor could help themselves. This is not something the government is capable of doing on a massive scale, but in this pretend scenario we can say that a job will be more helpful than a handout. More helpful than a job is a plot of land, where someone can work to grow their own food. This was man’s business for the majority of the creation, up until the emergence of the industrial revolution.

“Pious acts are prescribed in the supplementary Vedas (smritis), which specifically mention digging tanks and wells for the water supply of the people in general. To plant trees on the public roads, to construct public temples and places of worship of God, to establish places of charity where the poor destitutes can be provided with foodstuff, and similar activities are called purta.” (Shrila Prabhupada, Shrimad Bhagavatam, 2.8.21)

In ancient times the public works projects consisted of digging tanks and building wells. This way you wouldn’t have to hand out anything really. Instead of giving someone provisions, you create something that will automatically provide for them. If you install a well, the people of the community can use it to get water day after day. The rain will provide for them, which it already does for everyone else.

In whichever time period, the destitute person gets a handout, a job, a plot of land, or a well and suddenly they go from being unfortunate to fortunate. Yet the saints of the Vedic tradition, who follow jnana and vairagya, knowledge and renunciation, take something else to be the greatest fortune. They know the temporary nature of the universe and its creatures. Our ancestors have passed on and so will we. The body we own today is destined to be cremated or buried; it will not remain forever. The senses that belong to that body are also slated for destruction. In the short-term those senses are never satisfied. You eat a pizza pie today and you’ll want another one tomorrow. You have one beer at the bar with your friends and pretty soon you want one more. You win a bet and you decide to try to parlay the winnings on another bet. You meet one girl of your dreams today, and tomorrow you’re chasing after the next beautiful woman.

The spirit soul is the essence of identity, and it has an active propensity. Naturally, the greatest fortune would be the opportunity to use that active aspect for the right purposes. Think of it like getting a video game system where you can play all the time, never get tired, never get overly frustrated, and always feel like you’re doing the best job for society. It’s hard to imagine having that at the personal level, but through the gift of devotional service this scenario of contradictory conditions is certainly possible.

Shrila Rupa Gosvami is himself an example of this. Yoga is popular today as an exercise system, but its origin is in spirituality. The connection of two souls is what yoga really means, and the two souls aren’t equal. One needs the connection and the other does not. It’s like the difference between the appliance and the electrical socket. The socket is always there with its energy, and the appliance is what needs the electricity. The individual soul is what needs the connection, and the Supreme Soul is there waiting to be connected to. 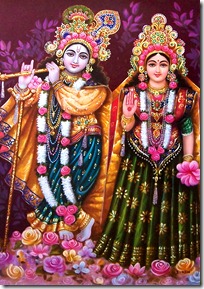 Rupa Gosvami is one of the famous teachers of bhakti-yoga in the modern age. He took to writing, preaching and worshiping at the direct instruction of Shri Chaitanya Mahaprabhu, the person who made prominent the style of bhakti-yoga dedicated to Lord Krishna and Shrimati Radharani. Bhakti-yoga is nonsectarian; it is the soul’s constitutional occupation. Saints like Madhva and Ramanuja revived the bhakti tradition in India prior to Mahaprabhu’s arrival, and then Mahaprabhu completed the job by specifically making prominent the transcendental mellow of sweetness in devotion.

That sweetness at the highest level is seen in the dealings between Radha and Krishna, or the energy of God and God Himself. To reach that topmost level of devotion is the ideal goal, and the beginning steps in climbing the ladder of progression flow through devotion to the lotus feet of Krishna. As it leads to the ideal end, devotion itself is the greatest opulence, and in the above referenced verse from the Shri Kunja-vihary-astakam we learn one way to receive that opulence. 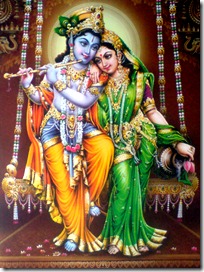 As a saint engaged in devotional service twenty-four hours a day, a person who already possessed that greatest opulence, Rupa Gosvami composed songs in praise of Krishna, with one of them relating to His playful sports in the Vrindavana forest. That play is madhurya, or sweet, and the sweetness descends to the recipient through hearing. Just hearing those pastimes in a humble attitude, without envy, is enough to get the great gift of devotion to Krishna.

That devotion brings an endless engagement. One can worship even while sleeping, so there is no question of boredom. Devotion to Krishna’s lotus feet soon becomes the primary engagement, and so the devotee juggles their responsibilities in accordance with that engagement. Keeping the ultimate goal in mind, they automatically learn how to manage the rest of their life. They are only after tasting the sweetness of Krishna’s association. And the greatest tool they have in their arsenal to protect against the attacking forces of the temporary material nature is the sound vibration of Krishna’s holy name, which can be constantly produced through chanting, “Hare Krishna Hare Krishna, Krishna Krishna, Hare Hare, Hare Rama Hare Rama, Rama Rama, Hare Hare”.

Provisions to the poor you’ll give,

So that in starvation won’t have to live.

Better if how to work they can know,

Through effort their own fruits to grow.

But the effect on the soul is the real test,

And Radha and Krishna’s mercy earn.