Home › love › Krishna Is the Best

Krishna Is the Best

“The Supreme Personality of Godhead is always inclined toward His pure devotees, and by His action it is clear that liberation is not very important for the devotees. Lord Krishna easily gives one liberation, but He does not so easily give one the facility to become a devotee.” (Shrila Prabhupada, Shrimad Bhagavatam, 5.6.18 Purport)

“I love this restaurant. Why? Because it makes the best pizza in the world. The taste is unlike any other I’ve experienced. Every time I eat the pizza, I wonder what I have done to deserve such good fortune. It is not a stretch to say that I love this establishment and the food they make. But oh, if they ever stop making good pizza, I won’t come here anymore. If they change chefs, if they start serving other kinds of food, or for whatever reason the food no longer tastes the same, I will have to take my business, err I mean love, elsewhere.”

In this case the affection offered is with conditions, and it is also fleeting. It’s a drive-by kind of exchange, where I offer something, get what I want, and then move on. This hypothetical scenario deals with a restaurant, which is an inanimate object, but generally our conception of love refers to interactions with other human beings. Nevertheless, the drive-by concept still applies. If it didn’t, there would be no such thing as divorce. Musicians would have nothing to write about, as broken relationships wouldn’t exist. Every person would get together with the person they love and remain in their company until the end of life.

We feel the need to say that we love someone or something because that open profession gives special meaning to the relationship. For the other party, it is also an indication of exclusivity. How I treat you in comparison to how I treat others gives you an indication of how I feel about you. If I spend more time with you than with others, I obviously value your association more. I may not even be aware of this fact, perhaps on a subconscious level I am attached to your company, but nevertheless the special treatment indicates a noteworthy sentiment.

When I tell someone that I love them, they should know that I consider them to be very special. They are not ordinary to me. I don’t just go around saying “I love you” to anyone. Oh, but if I take my affection elsewhere later on, if I only utter the words in order to receive an immediate benefit, then the emotion isn’t really sincere. In fact, the statement is fraudulent; it shows that I am a deceiver.

Isn’t that a rather harsh indictment?

If we wanted to measure the genuineness of the original sentiment, we’d have to test how long one stays faithful to it, judging whether or not the corresponding party’s response has an influence. This same principle has special significance in our loving relationship with God. In the Vedas, the ancient scriptures of India, there is no equivalent term for what we call love. Our conception of love is described as kama, which can translate to lust, desire, or sense gratification. Real love only applies to God, and it is known as prema.

Why the special distinction? Why a different word for love offered to God?

Prema is not fleeting. It is not offered to get a benefit to be used in the immediate term, with the love dwindling after the fact. Material success, the removal of distress, mystic ability, and even liberation from the cycle of birth and death can be easily granted by God, but not prema. It is a special commodity that is so valuable that those who have it are reluctant to openly discuss it. If they see someone who is sincerely interested in loving God, then they will describe the steps necessary towards attaining prema, but they will not expose their prema so liberally that it might be misunderstood. 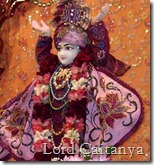 Lord Chaitanya is considered the most munificent form of Godhead because He freely distributed Krishna-prema, or love for Godhead. He offered this to everyone through the simple formula of chanting the holy names, “Hare Krishna Hare Krishna, Krishna Krishna, Hare Hare, Hare Rama Hare Rama, Rama Rama, Hare Hare.” His distribution does not tarnish the relationship with God because one has to be sincere in the chanting of the holy names to get the real effect. Despite the fact that it is freely offered, it is rarely accepted.

Why chant a mantra over and over again just to experience love of God? Why not go for an immediate benefit through worship of a divine figure who promises benefits? Or better yet, why not continue in the current path, where material opulence seems to come through personal hard work alone?

The chanting of the holy names, when accepted with full sincerity and practiced under the guidelines offered by someone who has Krishna-prema, slowly fosters love for God, which is the original position of the spirit soul. Though chanting the holy names is a beginning step, it is also practiced by those who are in full maturity in the discipline known as bhakti-yoga, or the religion of love. The reason the mature and the neophyte alike are attracted to chanting is that the recitation of the Lord’s names is a direct profession of love. It is like saying “I love you” over and over again. If you really loved someone, you would never tire of telling them how much you love them.

Unlike kama, prema does not pass by quickly. Those who practice bhakti-yoga with sincerity do not give it up so easily. They chant the maha-mantra at least sixteen rounds a day on a set of japa beads, as per the instructions of the Vaishnava spiritual masters like His Divine Grace A. C. Bhaktivedanta Swami Prabhupada. No amount of money can shake the devotee from this baseline practice, which means that no reward, manifest or otherwise, makes a dent in the loving relationship. This can only be the case if the loving party reciprocates to some degree. In the case of chanting, though there isn’t an explicit desire for reciprocation, the benefit is there anyway, as the holy name is the same as God. This means that to chant is to be in His company, where we enjoy a real loving relationship to stand the test of time.

As I’ve tried all of the rest,

I can say that this pizza is the best.

But if just one time pizza not up to par,

I will take my business away somewhere far.

Real love with longevity can test,

If not unbreakable present is defect.

But prema for Krishna not so easily attained.

Chanting holy names is our way to say,

That Krishna is the best, our friend to stay.