Home › renunciation › Dancing in the Rain

Dancing in the Rain

“One who is equal to friends and enemies, who is equiposed in honor and dishonor, heat and cold, happiness and distress, fame and infamy, who is always free from contamination, always silent and satisfied with anything, who doesn’t care for any residence, who is fixed in knowledge and engaged in devotional service, is very dear to Me.” (Lord Krishna, Bhagavad-gita, 12.18-19) 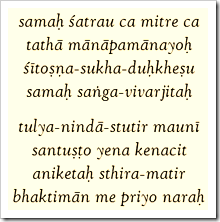 “Is your belly expanding? Just cut out carbs, especially simple sugars. These are commonly known as empty calories because they provide little lasting satisfaction. They go straight to your gut when you consume them in excess. And to top it all off, you’re hungry again shortly thereafter. Your blood pressure seem too high? Don’t eat so much salt. Put away the potato chips and avoid canned soups. Feel as if your circulation isn’t as good as it should be? Get rid of saturated fats. These clog up your arteries and make blood flow a lot more difficult. Whatever it is that is causing you pain, get rid of it. This way you’ll be better off.”

When applied universally, to all activities, this philosophy is known as shunyavada in Sanskrit. It means to negate everything, leaving only void. It is the natural response to a negative situation. If there is a sharp pain in your side from something pressing up against it, just remove the object causing the pressure. If you try this approach with everything in your life, you’re eventually left with nothing. And that is not the original intent. No one purposefully wants to sit in an empty space and do nothing, and yet that is precisely what will result if everything unwanted is negated. The better option is to figure out how to live in the existing surroundings. You have arms, ears, legs, and a face, so why not use them for good instead of ignoring them?

There is the famous saying: “life is not about waiting for the storm to pass; it’s about learning to dance in the rain.” If you desperately want to do something on a particular day, should you let the pouring rain stop you? Granted, time and circumstance do dictate what is appropriate and when, but life is full of so many storms. What if you want to drive to a friend’s house? What if you have to get to work? If you wait for the storm to pass, the precious moments of opportunity are lost. If you wait for the storm to pass, then pretty soon the night will fall. Then you’ll have to wait for that to pass too. Thus your wait ends up being double what it should be.

If you learn to cope with the rain, however, you trade a little discomfort for a higher benefit. The spirit soul, the essence of identity, can use this valuable lesson to reach the best end in life. There will come an end to life, make no mistake about it. If there is a beginning to life, then there certainly must be an end. We haven’t reached that point yet, and so we’re not consciously aware of it, but since when did awareness have any bearing on a factual occurrence? We don’t think about our eyes blinking, but they do anyway. We don’t think about the sun rising tomorrow, but it will happen. In the same way, life will come to an end, even if we choose to ignore it.

In recognizing inevitable death, one can find the best situation for that time. As we don’t know exactly when it will come, why not find the best situation now? This way if the end of life should suddenly arrive, we’ll be in the place we want to be. Ah, but where is that place? What is the ideal situation? This we don’t know until it is revealed to us. The fruitive worker thinks that the best situation is a palatial building to call home, which is filled with lavish furniture and good company and which rests on a large estate. The mystic thinks that the best situation is one where amazing abilities are exercised. Floating in the air, holding your breath for hours, or reading minds seems like the best place to be. The empiricists think shunyavada, or nothingness, is the best place to be.

In all such cases, there is the time factor to consider. If you have a palatial building, how long will it give you happiness? What if death doesn’t arrive right away? What will you do with your home that has so many square feet? If you have the ability to read minds, what will that get you? An ability must be exercised; otherwise there is no tangible purpose to having it. In the exercise of the ability, there must be an end to reach. If you don’t know that end, then you’re in the same boat as the person who doesn’t have the ability. If you’re doing nothing, what will happen in five minutes? What about ten minutes? Will you not want to act eventually? 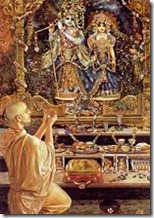 In the bhakti school, the best end is God consciousness. This end is also a beginning. If you ask someone who is truly immersed in divine love, where they only think of the best person in the world all the time, about their life before divine love, they have a difficult time remembering. They will think: “Wow, that was such a long time ago. I was a different person back then. Life was so boring. I tried this thing and that, and none of it was any fun. What was I to do, though? I gambled, drank beer, chased women, and ate meat because that’s what everyone else was doing. How was I to know that there was a better life out there, one where such behavior wasn’t even required? My existence really started to have meaning when I found God and then took to serving Him.”

The service aspect is the key. That is the “after” to the “before” of meeting God. Time is always a factor, irrespective of where you are. Time is a frame of reference marked by its influence in change. If you find God somehow or another, time will still take hold. If five minutes later you forget God, then what did finding Him really mean? On the other hand, if you serve Him afterwards, then meeting Him really made a difference. 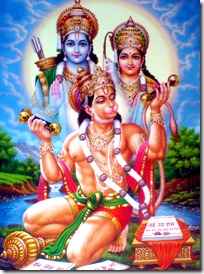 Shri Hanuman is the best example in this regard. A famous figure of the Vedic tradition, he once met the Supreme Lord in His incarnation as a warrior prince named Rama. Hanuman met God face to face. He was impressed with what he saw. He was mesmerized, enchanted, and warmed to the heart. His existence didn’t stop there, however. Hanuman already had full knowledge and mastery of the mystic perfections of yoga. Forget sitting in a hundred degree room and practicing stretching exercises for an hour, Hanuman was a real yogi. He could change his shape, become light, lift heavy objects, and do all sorts of other amazing things. Yet none of this meant anything to him until he took up service to Rama.

In that service he met so many obstacles. There were many “storms”, so to speak. He didn’t just hope for them to pass. He didn’t let them get in his way of serving God. Rather, he danced in the rain by facing these obstacles head on. Whether leaping across an ocean, hiding in a tree in the Ashoka grove in Lanka, or fighting off enemy combatants who were the lowest among mankind, Hanuman was always thinking of Rama. He was serving him throughout, making the most to his existence.

We can follow his example through keeping conscious of God. The easiest way to maintain that consciousness is to chant the holy names, “Hare Krishna Hare Krishna, Krishna Krishna, Hare Hare, Hare Rama Hare Rama, Rama Rama, Hare Hare.” Serving God is in the soul’s constitution; it is the real meaning to an existence. The potent spirit soul becomes fully vibrant when lovingly serving the beloved creator of this and every other universe. In that ecstatic condition known as bhava, treated equally are both the presence and absence of storms.

For storm to pass let me wait,

To be drenched not an ideal state.

After storm another to come along,

Then again to sing waiting song.

Better if in the rain you can dance,

This way success not left up to chance.

Many storms in Hanuman’s path came,

Served Rama, treated them all the same.