“With loving hesitation, Sita steals glances at the body of her beloved, like the vines around a desire tree going through its leaves by the blowing of the wind.” (Janaki Mangala, 108)

Sita’s love for Rama is real. It is not something that will go away or change. The blowing of the wind causes objects to shift. One second they may be connected with one object and the next they are disconnected. One second the wind knocks off the hanging piece of siding from the house, clanging against the side and annoying the residents in the process. Another second the same wind blows the piece of siding away from the house, removing the noise. In our dealings in the material world, our constant toggling between like and dislike manifests in all areas, and this shift can be compared to the blowing of the wind or the swinging of a pendulum. In real love, however, the connection is there to stay, like vines of a creeper wrapping around a tree and not pulling back.

Love, as we define it, is flickering, and this shouldn’t be difficult to understand. Just think of any couple you know who is married. Perhaps in the beginning of their relationship they are madly in love, always craving each other’s association. After many years together that excitement fades, for they see each other every day. They see each other all the time, and they have no other option. They are essentially stuck with each other for a long time. If they have children, they have other responsibilities to deflect from their original flame of affection. If they both work for a living, they have even less time for interaction. Thus their life goes from excitement to dull routine.

The routine then represents a sort of disconnected state. If you’re not at least thinking of each other all the time, then the physical separation due to the time spent at work only makes you further apart emotionally. Then, as soon as there is any disagreement, it becomes easier to separate permanently. Think about it. If you hardly see the person that you live with, how difficult would it be to live without them permanently?

This fact also explains how quarrels with family members who live elsewhere are so commonplace. If I see my family members once a year on Thanksgiving, what is the harm to me if I don’t see them one particular Thanksgiving? If I barely have enough time for my spouse and children, how will I have time to spend with my friends and family who live nearby? If I get into any kind of argument with them, it is very easy to vow to never speak to them again and then keep that vow.

The Vedas explain why material love is tenuous. The foremost exponent of Vedic philosophy in the modern age is His Divine Grace A. C. Bhaktivedanta Swami Prabhupada, who teaches from the authorized line of disciplic succession that originates from Krishna, the Supreme Personality of Godhead. In this line of instruction not only is material love talked about, but so is spiritual love. The Bhakti-rasamrita-sindhu of Shrila Rupa Gosvami deals extensively with loving God, which is the soul’s natural disposition.

From the bona fide teachings of acharyas in this line, we learn that what we know to be love is actually kama, which can be translated to “material desire” or “lust.” Material desires change all the time, so what we know to be love isn’t permanent. We love someone today, but tomorrow we could love someone else. We love our nephew today because they are so young, but when they get older the love might not be as strong since they are an adult, and thus deemed less innocent.

Real love is prema, and it can only be directed at God. You cannot have prema for anyone else. Seems like an unfair declaration, but in the Vedas there is no concern for how the truth will make others feel. Political correctness is simply a way to stifle speech because of how others are made to feel. Still, the truth is the truth. If our cat is dead, we shouldn’t tell someone else that it is alive to spare their feelings. The death is a reality. Similarly, the fact that prema can only be directed at God is a reality, and the sooner one accepts this fact the sooner they will reach the ultimate aim in life.

We can try to offer prema to others, but something will get in our way eventually. If we keep our affection for someone else throughout life, which is indeed very rare, eventually their association will be lost. This is the influence of time, which is known as kala in Sanskrit. Kala appropriately also translates to death, which is the most obvious indication of the influence of time. Attempted prema can also be checked by others through their treatment. The lack of reciprocation is the easiest way to turn love to hate. Our own affection can go elsewhere based on the actions of others. Also, we are limited in this exercise of prema. If I am separated from my loved one and I think of them, they have no way of being affected by my thoughts. In this case the physical distance influences how my prema is offered. 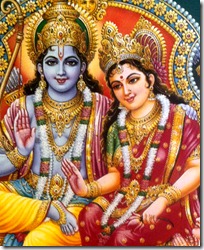 Real prema cannot be checked because it is directed at someone who is omnipresent. Thinking of Him is as good as being with Him. The verse quoted here from the Janaki Mangala reminds us of this fact. Sita Devi is about to place the garland of victory around her future husband, Lord Rama. Rama lifted and broke the bow of Lord Shiva at the contest in King Janaka’s kingdom. The first person to do this would win, and the prize was the hand in marriage of Sita, Janaka’s daughter. Sita was thrilled that Rama won; she saw Him and knew that He was the right husband for her.

Her love was so strong, but since the marriage hadn’t been officially performed yet, she couldn’t do anything but stare at Rama. And yet that was good enough to be considered love, as her behavior is likened to a creeper wrapping around the leaves of a desire tree due to the influence of the wind. The creeper in this sense is too shy to go to the desire tree. Sita loves Rama, but protocol dictates that she not approach Him yet. She was a pious daughter of a pious king; so she would not violate the standard etiquette by showing too much affection in front of others.

Rama is not an ordinary tree; He is likened to a desire tree, which is found in the heavenly realm. From a desire tree you can get whatever you want. It is the only tree in existence that will grow money if asked. To be wrapped around a desire tree is to be in the presence of something that will always give whatever you want. Sita only wanted to be with Rama and serve Him. Her love for Him was without motivation and without interruption. Not even her shyness could prevent her from going to Rama. Her glances were like the wind pushing her towards Rama to steal a moment of affection.

We are all meant to love God. We may realize Him through different features, but the attraction is there all the time. When influenced by ignorance, we love His material energy, which is separate from Him. This kind of love is known as kama, and it results in repetition in the cycle of birth and death. When we love His impersonal feature, we merge into the Brahman effulgence, and thereby lose our identity. The loss of identity means the loss of the ability to love; hence residence in the Brahman effulgence is not permanent.

When we love God’s personal form we actually offer prema. This is what the soul really wants, but due to the influence of the material nature, which changes our real ego into a false one, we offer our affection to so many other people and things. From Sita’s example we should know that if we offer our love to God He will never reject it. He will allow us to wrap our vines around Him without any problem, no matter how far away from Him we may be. And the devotees of the Lord are so kind that they carry the winds of devotion to help the process along, giving us the necessary nudge when we are hesitant. They bring the information of Sita and Rama’s marriage and they also always chant their names, as found in mantras like “Hare Krishna Hare Krishna, Krishna Krishna, Hare Hare, Hare Rama Hare Rama, Rama Rama, Hare Hare.”

To love God you want to give a try,

But in beginning maybe a little shy.

From fear not able to budge,

So devotees give helpful nudge.

Sita and Rama, their glories we always sing.