“All the rituals were done exactly in accordance with family tradition and the Vedas. Both priests here and there did everything with a happy mind.” (Janaki Mangala, 139)

Bhagavan is the Sanskrit term to describe the entity most of us refer to as God. It is a compound word that means one who possesses all fortunes. Someone is fortunate if they escape danger in the nick of time. One is fortunate if they get good things without having to strive for them. The more complete definition of “fortunate” spreads to the categories of beauty, wealth, strength, fame, wisdom and renunciation. One who possesses any of these opulences is considered fortunate. Indeed, if someone is wealthy alone and lacking all the other opulences, they get so much attention in society.

God has all of these opulences. He doesn’t have some of them some of the time, either. He isn’t beautiful one day and renounced the next. He isn’t wise one time and then stupid another. He holds these opulences all the time. And by the way, He holds them to the fullest degree. The jocks in school may have gotten all the girls, but they likely weren’t very smart. The nerds could do well in physics, but in beauty they weren’t much of a match. The person who is renounced, living peacefully in a remote area, doesn’t have much wealth. The wealthy man has a difficult time coping without someone to meet his every demand at every second. In this way we see that the opulences are often contradictory; possessing one means lacking another.

Not so with the Supreme Lord, who is thus known as Bhagavan. Since He holds all opulences simultaneously and to the fullest degree, He has no need to follow any protocol. I tell my kids to study in school so that they can get a good job when they grow up. I tell my employees to arrive to work on time every day so that the business runs smoothly. If they fail to do these things, there are negative consequences. When you are the most fortunate person, however, you can skip whatever function you want and not have it affect you. 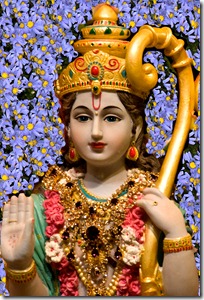 In the case of Shri Rama, Bhagavan gives extra attention to protocol. This is Rama’s special mercy. As an incarnation of Bhagavan described in the Vedas, the original books of knowledge of the world, Rama doesn’t need to follow anyone or anything. If He fails to listen to someone, by definition He cannot be hurt. He still follows protocol better than anyone else, just to set a good example. That example spreads to all of His activities, including His marriage to the beautiful daughter of King Janaka.

In the above referenced verse from the Janaki Mangala, which is the wonderful poem of Goswami Tulsidas glorifying that sacred marriage, we see that all the rituals were done in accordance with the Vedas and family tradition. Deference to each can be logically understood. The family tradition is what brings us to the current position. Even if our family happens to be almost animal-like, there is still some tradition that is followed. Maybe everyone meets together on Thanksgiving. Maybe everyone exchanges gifts on Christmas. These may be small traditions, but they are important nonetheless, as they set a moral standard that serves to better the individuals growing up in the family.

One of the quickest ways to destroy a stable societal structure is to remove family traditions. The surefire way to destroy family traditions is to have a society filled with unwanted children. A famous warrior once worried over this possibility. His thoughts are recorded in the Bhagavad-gita, which is itself a Vedic text. With wanted children, which are produced through following the Vedas and family tradition, you help to ensure that the family structure remains solid in future generations.

“Due to the evil deeds of the destroyers of family tradition, all kinds of community projects and family welfare activities are devastated.” (Arjuna, Bhagavad-gita, 1.42)

The institution of marriage is itself rooted in the Vedic tradition. Family tradition then adds little nuances here and there. In ancient times, each family had their own worshipable deity. These were authorized divine figures; they were not made up on a whim. In the marriage of Sita and Rama, the deities of both families were worshiped. Each tradition specific to each family was also followed. Such traditions are not completely necessary, but by showing respect, the individuals remain centered around godly life. They realize that marriage is meant to be in dharma, or religiosity, and not kama, or sense gratification. The animals live in kama and they don’t have anything like a marriage.

The two family priests, Shatananda from Janaka’s side and Vashishtha from Dasharatha’s side, performed these rituals with happy minds. They went through all the different aspects, taking care of things here and there in the mandapa, the structure under which the ceremony took place. Since everything was done properly, the marriage ceremony of Sita and Rama was beyond reproach. No one could point out a flaw in what was done. Neither was there a flaw in either of the participants, who are perfect beings, ideal for being worshiped. Indeed, any couple who keeps the image of Sita and Rama with them throughout life will have the best marriage in dharma.

All rituals done in proper place and time,

When with traditions to stay,

But example respect in others to inspire.

For love of God, done with happy mind,

All good qualities in couple to find.