Four Things That The Vision of Narasimha Told Hiranyakashipu

“O lord, we know that when you simply move your eyebrows, all the commanders of the various planets are most afraid. Without the help of any assistant, you have conquered all the three worlds. Therefore, we do not find any reason for you to be morose and full of anxiety. As for Prahlada, he is nothing but a child and cannot be a cause of anxiety. After all, his bad or good qualities have no value.” (Shanda and Amarka speaking to Hiranyakashipu, Shrimad Bhagavatam, 7.5.49)

Not a common source of sadness. Over all of the things to cause the morose feeling, failure to kill your own son, who is five years old at that, is not high on the list. Psychiatrists are sworn to a code of confidentiality, but they will sometimes share information about their cases without referencing individual names. Something like the metadata collected from a surveillance operation, the mental health professionals would be baffled by Hiranyakashipu’s situation.

The king of the world was equally sad over the son’s ability to survive. The root cause of the attacks was the professed allegiance to Vishnu, the Supreme Lord. Hiranyakashipu had a rivalry of sorts with the Vaishnavas. He thought Vishnu was the worst person in the universe. If Vishnu were indeed God, as the Vaishnavas claimed, then He could be defeated through the exercise of strength. Therefore, the eventual vision of Narasimha taught that wicked father several important lessons.

1. I was the source of your strength all along

Hiranyakashipu should have been wise to the truth. Memory is sufficient. Remember how you achieved the position at present. I may be proud of the job I landed, of the annual salary and benefits, but I didn’t achieve anything entirely on my own. There was the hard work and sacrifice of others. The friends and family supported. At the very least, they deserve some of the credit.

In the case of Hiranyakashipu, the help was more obvious. Lord Brahma, the creator, granted several boons. They were specifically asked for. Hiranyakashipu wanted immortality, and when he couldn’t get it he settled for the next best thing.

Build up a seemingly impenetrable barrier through component pieces. Then consider the work complete, that you have achieved a backdoor way to immortality. Meanwhile, Brahma was the visible source of strength, and Narasimha showed that behind the scenes there was someone else supporting even Brahma.

2. I was the source of Prahlada’s strength

Hiranyakashipu wanted to know how Prahlada survived. There were multiple attacks, and each one severe in nature. The assistants in the royal court did not mess around. They took the orders from the king seriously. Prahlada simply meditated. He did not run away or offer physical resistance. 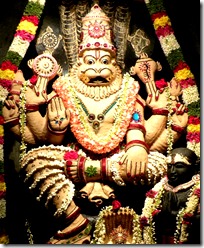 Amazing strength at the source, Narasimha was the visual evidence that the nonbelievers so often insist upon. Hiranyakashipu didn’t believe, but he was forced to acknowledge the truth when meeting the amazing half-man/half-lion.

3. I am time, the great devourer

Prahlada had previously explained to the father that material life is a kind of embarrassing situation. It is better to retreat to the forest and concentrate on the Divine. This existence is not meant for succumbing to the illusion of acquisition. Better to stay above the influence of the senses.

The vision of Narasimha told Hiranyakashipu that everything was over. The hard work that went into supplicating Brahma yielded a bountiful result, but now the king would have to leave it all behind. No more ruler of the world. No more a leader feared by everyone.

4. I am everywhere, including in the pillar

Prahlada explained to the father that the source of strength was the same for everyone. That is to say the thief and the police officer both have the Supreme Lord inside of them, providing the spark of animation, so to speak.

In most instances, that expansion of the Supreme Lord acts as a neutral observer. He does not specifically interfere in activity, since at the end of the day pious and impious bring the same result: continued rebirth.

Prahlada was a special case since the child decided in favor of devotion to Vishnu. Hiranyakashipu directly threatened that, and so the same Supersoul gave partiality to one side in the conflict. The king could not believe that God was everywhere, and so he mocked Prahlada by asking if the source of strength were in the nearby pillar. 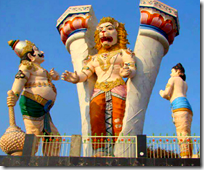 Narasimhadeva proved with a visual manifestation that God is indeed everywhere. The amazing sight was triggered by the innocent devotion of a saintly son of a Daitya king, affirming that Vishnu is indeed partial to His devotees and that such servants can be found in any kind of family.

Child of devotion without fear,

Understood that in pillar near.

And also in the heart,

Bhakti life from the start.

Father as king to preside,

With mentality on the other side.

That strength and effort alone,

Like Loading...
‹ What About This Idea That God Gave Us Special Teeth For Eating Meat
Three Options If You Can’t Get Immortality ›