“The two daughters of Janaka’s younger brother were supremely beautiful. The elder one, whose beauty equaled hundreds of Ratis, married Bharata.” (Janaki Mangala, 153)

There are different kinds of drunks. One is morose. They may be a happy person normally, but after a few adult beverages they tend to sit in the corner and sulk. Then there is the aggressive drunk. While they are mild and gentle during normal times, it’s as if their beers are cans of spinach going into the mouth of Popeye. They think they can fight anyone in the bar, perform any strongman feat, and endure any pain just because they’ve had a few drinks. 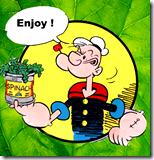 Another kind is the happy drunk. Their love for the world comes out once they are intoxicated. They go up to everyone and hug them. They run through their contacts on their phone, calling each of them and telling them how they feel. From the king of education that is the science of self-realization we learn that deep down the soul wants to love. This is its feature of bliss, which is known as ananda in Sanskrit. Intoxication brings out the perverted form of the genuine sentiments belonging to the pure spirit soul. The soul is in its ideal state when loving God. That love manifests in service, and so when there is a chance to serve and the mood is pure, one is extremely happy. The purest form of the happy individual then gets shown to the world.

If you are genuinely happy and feeling so much love for someone else, you can’t stop in your offering of service. With the householder this mentality manifests in the continuous offering of food. “What, that’s all you’re going to eat? You didn’t like the food? No, you have to eat more. Here, take some more of this. You didn’t have enough of that, either. Here, now your plate is full again.”

With the member of a team, the love is shown in the offering of praise. If a player on a sports franchise is retiring after many solid years of service, it is not uncommon to hold a retirement ceremony for them. If the player is really special, he’ll be shown honor by all the teams that he played against. Past players will come out to offer praise and gifts. The fans will give standing ovation after standing ovation. The honor paid will reach the point of excess, where the honored will have to ask others to stop, lest they further embarrass them.

In ancient times, one of the ways to pay honor to someone else was to give away your daughter to them. Known as the kanyadana, or the donation of a maiden, this was a very nice gift for the groom. These marriages were in dharma and not kama as they are today in most cases. Dharma is duty. In its original meaning it is an essential characteristic. It takes on the meaning of duty when the principles followed help to maintain that characteristic. Dharma is thus also known as religion and righteousness.

In a marriage in dharma, both parties follow duties that will help to make the relationship fruitful. The sought after reward is not a happy home, time enjoyed in each other’s company, or even good progeny. Surely those things can be good, but the real objective is God consciousness. This is the real fruit of an existence, and it is also the most difficult to taste. There is the illusory energy known as maya that gets in the way. Maya tells us to chase after sense gratification instead. Earn so much money, find the spouse of your dreams, care for your young children and pets, find a hobby to lose yourself in – do anything except think of God.

One of the English translations for the Sanskrit word maya is “that which is not.” Maya is specifically not Brahman, or the truth. Dharma is for finding the truth and going beyond it to Parabrahman, who is the entity most of the world scantily knows through the term “God.” The path of dharma is not limited to renounced asceticism. It is not limited to study of esoteric truths found in a high philosophy. It is not limited to the difficulties of mystic yoga. Any aspect of life can be part of dharma, including marriage. 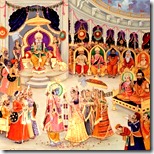 In the marriage in dharma, the chaste wife is a wonderful gift. She helps the husband stay on the righteous path. She supports him. He, in turn, protects her. The relationship is beautiful. As any relationship is difficult to maintain, if each party understands their role and the higher objective, the chances for maintaining that relationship and having it blossom increase.

In the above referenced verse from the Janaki Mangala, we have an example of a person in total bliss. He is in ananda because he is getting to serve God directly. Parabrahman has appeared on earth in His spiritual form as a beautiful prince from Ayodhya. King Janaka is the fortunate soul here given the chance to serve. His essential characteristic visible to the world is adherence to righteousness. This was tested when he decided upon a contest for the marriage of his beautiful daughter Sita. Janaka vowed to give Sita away to whichever prince would first lift the amazingly heavy bow of Shiva.

By divine arrangement, Rama attended the contest and lifted the bow. Thus Janaka was able to give away his most precious Sita to God. But that wasn’t enough. His bliss was too high to be limited by a single offering. Rama had three younger brothers, all equal to Him in beauty, good character, and strength. They were chivalrous princes as well, and since the custom of the time was for the elder to marry prior to the youngers, these princes were without supporters. 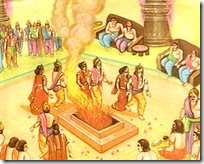 Janaka took care of that by then giving away the daughters of his younger brother. The eldest daughter married Bharata. She was supremely beautiful, parama manorama. Manorama means “to please the mind,” and the adjective parama indicates that she was the best at pleasing the mind of another. This came from her beauty alone, which rivaled that of hundreds of Ratis. Rati is the consort of Kamadeva, who is the equivalent of a cupid. Kamadeva is the god of desire, and he is very beautiful. His wife is naturally very beautiful as well.

Not meant to be an insult but a way to praise further, the beauty of Bharata’s wife was like one hundred times that of Rati’s. This was fitting for Rama’s next younger brother. Bharata was of a dark complexion, just like Rama. Janaka had already given everything to Rama, so the brothers were next to be showered with gifts. They are also partial incarnations of the Supreme Lord, so in this act Janaka’s devotional service continued. Whether one is a king or a pauper, whether they are wealthy or modest, if their desires in devotion are pure, know that the Supreme Lord will create endless opportunities for their service to continue and flourish.

Devotional sentiment in king only grew,

So next gave brother’s daughters two.

In Bharata’s new wife to find,

Supreme beauty to steal the mind.

To eldest brother so strong and brave,

Not pleased until married were all four,

Chances for service God gave to him more.