“As you are very strong, the brother of the master of the treasury [Kuvera] and possess a great military force, why did you have to lure Rama away to come and do your wife-robbery?” (Sita Devi speaking to Ravana, Valmiki Ramayana, Sundara Kand 22.22)

Imagine that you really need to have something done. When you ask somebody to do it and they decline, you have no choice but to use words to try to persuade them. You will present arguments in your favor. You can use the words from their response to form counterarguments. In the case of Ravana, his proposal was out of the question. Still, he persisted, and he thought his arguments were valid, worthwhile, and free of flaw. Sita Devi, the person Ravana was trying to persuade, saw right through both him and his words. In an artful rebuttal of his claims, she waited until the very end to completely expose the flaw in his case. As an expert attorney speaks no further once the opposition’s argument has been completely dismantled, Sita spoke no more after delivering the most striking blow to his presentation.

There is a famous Hollywood movie particularly known for its compelling climax that takes place in a courtroom. It appears that the defense doesn’t stand a chance, that the prosecution, with their leading witness, has defeated them. Everyone on both sides knows that the witness is somewhat responsible for the crime tagged to the accused, but without sufficient evidence, there is no way to convince the court. In the end, the upstart lead attorney for the defense figures out a major flaw in the star witness’s testimony. The attorney ends up using those words against the witness, presenting the argument so perfectly that the witness has no choice but to get angry. In his anger, he loses his composure and gives a de facto confession while on the stand.

A similar thing happened to Ravana, the king of Lanka. He wasn’t on trial, but he presented arguments nevertheless. He was trying to persuade Sita, the wife of Lord Rama, to abandon her lifelong vow of chastity and become the chief queen in Lanka. Sita was having none of it. She had no desire to be with him. She never gave even a glimmer of hope to Ravana. Today she is famously known as the most devoted wife, the beloved eternal consort of the Supreme Lord. God is one, but He appears differently at different times of the creation. Though His manifestations may have a different visible appearance to us, He is still the same individual. The same holds true for His eternal consort. Sita is the manifestation of God’s wife who appears as the beloved daughter of King Janaka.

Ravana presented many arguments in his favor. He reminded Sita that he is the brother of Kuvera, who is the treasurer of the demigods. The treasurer keeps an eye on the wealth. As the brother, Ravana had access to that fortune. When saying this to a princess, it is a way to point out that they will never have to live in poverty. Sita, though a king’s daughter and a prince’s wife, was living like an ascetic in the forest when Ravana met with her. The foolish king of Lanka mistakenly thought that Sita was poor and that her husband Rama was without fortune. He also thought that Sita cared so much about money, wealth and fame. He did not know that Sita is only interested in serving her husband. This is her choice. No one can force her to do otherwise. She is the most independent woman, and she uses that independence to behave as the most chaste wife.

Ravana also bragged to Sita about his strength and his mighty military. He thought he made a pretty compelling case for winning over any woman, let alone someone who just came from the forest. Ravana thought he rescued her from a life of destitution. In his mind, she should have jumped at the chance to be his wife. 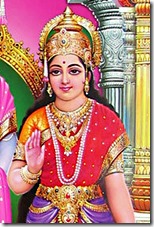 Sita swiftly, deftly, and strategically dismantled his entire case. The above referenced verse from the Ramayana is her concluding remark to the king, who had kept her in the Ashoka grove in his kingdom. There is no answer to the rhetorical question she puts forth here. There is no excuse Ravana can come up with. There is no counter argument. Her question basically says, “So, I see you’re very proud of your strength. You’re also the brother of the master of the treasury. You also have a mighty army. I agree with these points. Kudos to you. But let me ask you something. If you have all this going for you, why did you have to lure Rama away in order to take His wife? Isn’t trickery the tactic for the weak? We know that diplomacy is beneficial for the weaker party in a conflict, and based on what you have told me, you are anything but weak. Therefore why did you have to wait until Rama was out of the picture before doing your wife-stealing?”

The arguments put forth by those against devotion to God, which is the constitutional engagement of the spirit soul, are always full of such holes. If the life of sense gratification were the summit to an existence, why then would anyone ever be miserable? Everyone eats, sleeps, mates and defends. Some do it to a greater degree than others. Some also live for longer than others. Nevertheless, each living being has some taste in eating, some form of sleeping, some experience with sexual behavior, and some inclination to defend what they have. Why, then, is there war, famine, pestilence, and death? Why is there constant angst? Why is there anger, greed, wrath, and jealousy? 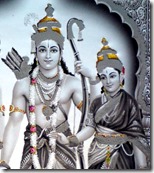 It must mean that there is a higher taste. There must be more to life than sense gratification. There must be a reason the human being has more intelligence than the animals. Sita shows the reason in her lifestyle, in her mindset that cannot be altered. Whether in splendor or squalor, in sickness or in health, richer or poorer, she serves Rama. She has the luxury of His physical association, but this does not mean that others are excluded from worship. The lone requirement is the proper consciousness, which Sita had and Ravana lacked. She tried her best to set his mind right, but even defeated in his arguments Ravana would not budge. Others needn’t fall into the same trap.

For so long his own virtues to extol,

But in his arguments remained a gaping hole.

If brother of Kuvera and with army of might,

Why for taking Sita waited for Rama to be out of sight?

For this final argument there was no counter,

Worship Sita and Rama and time no longer waste.