“Now hear, O son of Pritha [Arjuna], how by practicing yoga in full consciousness of Me, with mind attached to Me, you can know Me in full, free from doubt.” (Lord Krishna, Bhagavad-gita, 7.1) 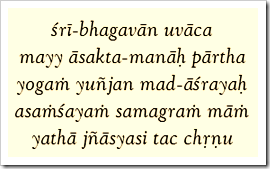 Those who actually follow the teachings of the Bhagavad-gita ask the sincerely interested to not speculate into the nature of the Absolute Truth. This is a tough sell, as we have been wondering about our surroundings ever since we exited the womb. It is only natural to at some point think about who created everything, and consider whether or not there is a singular creator or everything just happened to appear, as if by chance. The Bhagavad-gita itself gives the correct formula for knowing the Supreme in full, or close to it, free from doubts.

A person witnesses a tragedy and has the following contemplation:

“This is one of the worst things I have witnessed in my lifetime. Needlessly, people have died. They weren’t doing anything to anyone. They were simply going about their business. One person was on their way to work, another to the hospital, and another to a friend’s home. Their plans were abruptly cancelled by the natural disaster. Children were left without parents. Parents never again would get to see the smiling faces of their beautiful family members. The survivors were left without arms and legs. So much destruction caused by nature. I’m convinced of it now. God is indeed a vengeful and angry person. He must be as those zealous preachers say: either submit to His will or He will punish you in the worst possible way. And boy does He punish. Look at the carnage around me. He must have been very upset with these people.”

A person receives a tremendous boon in their life and has the following contemplation:

“I can’t believe my good fortune. Everything is working out for me. First I got that job that I really enjoy. I was unemployed prior, and without having to search for it, this job basically fell in my lap. Then my brother and sister just moved back to the area. This means that I will get to see them on a regular basis. I just married the man of my dreams. He is such a loving husband, and his family is great too. And now we’re expecting a child. I must say, God has been good to me. He is indeed a benevolent person; I can attest to it. How can anyone say otherwise? Look at how great He has been to my whole family. I know that He’s looking over me, taking care of me when I go astray. I know that He has a fondness for me. God is great, and I can’t wait to see what else He has in store for me.”

A person studies the nature around them and also develops a little knowledge of spirit. They have the following contemplation:

“We’re all one. I’ve concluded this. I’m no different than anyone else. My brother and sister are the same as me. I have affection for them, but what about others? Are others not related to me in the same way? When we see a tragic event reported in the news, they will tell you how many of the victims are from the country of the viewers. This always seemed odd to me. So if there weren’t any native born victims, then suddenly the tragedy isn’t so bad? What about the other people? Are they not affected? Do they not have family members? We all go through the same things in life. Even the animals are spirit inside. That is God to me. He is the collection of everything. The total energy, of which we are all a part, is God. He is one. You are God and so am I.”

These represent just a sampling of the different speculations the mind can perform based on outward perception. If you combine the perceptions of the innumerable wise personalities who have lived on this earth previously, you have a lot of information to sift through. And yet the nature of God is such that no amount of speculation, regardless the sharpness of the brain, will lead an individual to a full understanding. The true understanding is only available through yoga.

And the yoga has conditions. It must be done in full consciousness of the Supreme Lord, and there must be attachment to Him. Right away, this triggers some alarms. How can we be in full consciousness of someone we don’t know? How can we be attached to Him? If we knew who He was, we wouldn’t have a problem. The chain of disciplic succession resolves these issues. Those in the chain know God. They are attached to Him. They know that He can be realized in three distinct features. The first is Brahman, which is the sum total of spirit. Matter is a kind of Brahman too, but it is not the life to anything. Brahman is the spirit that animates matter, and every living entity is part of Brahman. When one realizes that they are the same as everyone else, they are on the platform of the Brahman understanding.

Then there is Paramatma, or Supersoul, which is the localized aspect of God. In this feature He is distinct from everyone else. Paramatma is different from atma, which is the local resident. Atma is in the category of Brahman, whereas Paramatma is different. The complete realization is of Bhagavan, or the Supreme Personality of Godhead. He is the sum total of everything. He is separate and somewhat the same, but never completely equal to anything else. 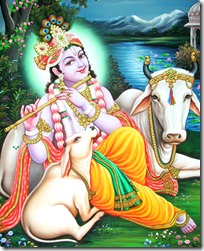 Bhagavan has many different forms, but the original is a charming youth who carries a flute in His hands and remains forever beautiful. The name Krishna aptly describes Him, and in that transcendental form He descends to different realms from time to time to offer words of wisdom. The Bhagavad-gita is His song, sung by Him to a distressed warrior named Arjuna on the battlefield of Kurukshetra on the eve of a great war.

The chain of disciplic succession starts with Krishna. The teachers in the line follow the instructions of Krishna, in the proper spirit. Therefore they can tell others about Krishna and how to be conscious of Him. They describe the features of Krishna, including His activities, His nature, and His likes and dislikes. This allows for attachment. With attachment and consciousness, the student can follow devotion properly. And by following such a method they get to know Krishna in full, free from doubts. No longer do they have to speculate. No longer do they mistake temporary results to fruitive activity, or karma, as the direct intervention of the Supreme Lord. No longer do they lament for the shedding of the temporary body at the time of death or rejoice for the acceptance of the temporary material form at the time of birth. They instead take great joy in discussing about Krishna, with their mind fully absorbed in Him.

“The thoughts of My pure devotees dwell in Me, their lives are surrendered to Me, and they derive great satisfaction and bliss enlightening one another and conversing about Me.” (Lord Krishna, Bhagavad-gita, 10.9)

“Please don’t speculate about God,” the kind teacher will say. “Learn about Him from the Bhagavad-gita. Chant His names, give up harmful activity, and try your best to always be conscious of Him. Then you’ll know Him, and if you know Him you won’t need to know anything else. Trust me. What I tell you is for your benefit.” And so the wise students accept this instruction and start the process by always chanting the beautiful names of Krishna found in the maha-mantra: Hare Krishna Hare Krishna, Krishna Krishna, Hare Hare, Hare Rama Hare Rama, Rama Rama, Hare Hare.

Depending on situation to find,

Specific idea of God in mind.

But from those who knowledge have got,

Kindly request that of God speculate not.

Real nature of Him to others can tell.