A Clear Conception of God

“The eldest son to that king was named Rama. He was very dear, had a face resembling the moon, was a knower of distinctions, and was the best among all wielders of the bow.” (Hanuman, Valmiki Ramayana, Sundara Kand, 31.6)

Through mental speculation, personal effort, meditation, or logical deduction alone one cannot get a clear conception of God. This is due both to the limitations in the individual living entity and the extraordinary qualities belonging to the Supreme Lord. His features are beyond our comprehension. We can only know them slightly from an authority source, who describes everything in just the right amount of detail. This authorized description also safeguards against the dangerous acceptance of an imposter incarnation.

An imposter is someone posing to be someone else. All actors on a stage are imposter-like, since in real life they have their own identities. They are purposefully portraying someone else for the sake of artistic expression, which hopefully entertains an audience as well. There is the imposter in the form of an identity thief, who looks to steal from an innocent person without suffering any consequences. There is the imposter who poses as someone else in order to gain entry into a restricted area.

None of these imposters is as dangerous as the person posing to be God. This should be the most difficult trick to pull off. We can accept that a fraudulent person might be who they say they are based on a social security number. That isn’t very easy to decipher. The actor can give such a great performance on stage that we actually believe them to be the person they are portraying. That is the intention going in anyway, so if we are inclined towards a particular behavior, it is not out of the realm of possibility for that behavior to occur.

God is everything. In the Vedanta-sutra, it is said that He is the source of everything. All that we see around us has its origin in Him. Though He is ultimately the father of everything, He is not in everything. The tree in the park emerges from the potency of the Divine Master, but the tree is not the Lord Himself. The same goes for the particle of dust and the massive sun in the sky.

“By Me, in My unmanifested form, this entire universe is pervaded. All beings are in Me, but I am not in them.” (Lord Krishna, Bhagavad-gita, 9.4)

The living entity is part of the universe of objects that emanates from the Absolute Truth. This means that none of us can be God. We can be one with Him through the proper consciousness. In that oneness we still maintain a separate identity, but we regain our original position, that of servant. In oneness we assume our proper role, completing the beautiful picture of a Supreme Lord being worshiped by those who love Him purely. 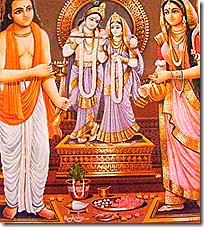 The imposter will proclaim that they are God. They have no evidence for this. They can’t explain to you why they have come and why they will leave. They cannot tell you why they needed to meditate in order to become God. They cannot explain the paradox of becoming God after having not been Him for so much time. Instead, through some cheap illusion and an exhibition of meditation they will try to trick others into thinking they are the Absolute Truth.

Shri Hanuman, a soul who is always one with God, here provides an opportunity for identifying God in the proper way. In this instance he is describing the Absolute Truth in His incarnation of Shri Ramachandra. Now, any parent can pick any name for their child. If my son born tomorrow gets named Shri Ramachandra, does that mean that the child is God? In fact, many imposters in the past have claimed to be Ramachandra, and so to eliminate the possibility of confusion we can consult Hanuman’s words.

Ramachandra, who is also known as Rama, is the son of Dasharatha. Again, anyone can be named Dasharatha, so Hanuman prior to this explained that Dasharatha was the king of Ayodhya, appearing in the Ikshvaku dynasty. Dasharatha’s extraordinary qualities in strength, bravery and kindness were also revealed.

Here the description turns to Rama’s qualities. Hanuman says that Rama is very dear and has a face resembling the moon. These two qualities are very difficult to find simultaneously in one person. A face resembling a moon is not an ordinary thing. Rama was very dear to everyone in Ayodhya, and especially to the father Dasharatha. Rama is a knower of distinctions. When young children learn the alphabet and words, they are often shown pictures of animals to help in their identifications. These are distinctions; one animal is different from another. To know of all distinctions makes one an expert. Rama, who is the source of everything in His original spiritual form of Krishna, knows the identical spiritual quality that all living entities share. At the same time, He is expert in the behavioral patterns and traits of the different species.

As Rama, God carries a bow and arrow set. During the Treta Yuga, the second time period of creation, there are many wielders of the bow. Rama is known as the best of them. He is expert in the distinct discipline of archery, which is supported through the chanting of Vedic mantras. This is merely the beginning to the description of Rama. These words tell of some of His qualities, but there are activities as well. Rama also has many other names.

To know the bona fide incarnation, one should be able to get such information from an authority source. Someone on a level of Hanuman should be able to tell you the incarnation’s earthly mother and father, their qualities, and what their activities are. An incarnation cannot be made up after the fact. Rama is always Rama. He was the Lord of the Ikshvaku dynasty prior to His appearance on earth, and He remains so even today, many thousands of years after His appearance. Thanks to the wonderful Hanuman, we get a clear conception of God, which makes it easier to take up the lifelong ambition of the distressed condition soul: devotional service.

Anyone claim of divinity can make,

How truth from lies to take?

The qualities in God that be.

Easy to give one Rama the name,

But not any to have qualities the same.

Knowing both distinctions and sameness,

Having moonlike face and character blameless.