“By such childhood pastimes as this He is drowning the inhabitants of Gokula in pools of ecstasy, and is revealing to those devotees who are absorbed in knowledge of His supreme majesty and opulence that He is only conquered by devotees whose pure love is imbued with intimacy and is free from all conceptions of awe and reverence. With great love I again offer my obeisances to Lord Damodara hundreds and hundreds of times.” (Shri Damodarashtaka, 3)

Know that Vedic literature provides many names to match the concept of “God.” This is because of fact and also to help those who are not God understand Him better. One of the names is Ajita. This means “unconquerable.” It is not so difficult to understand. If you are the Supreme Being, then surely no one can defeat you. If someone can, then it means that they are superior to you; hence negating the title. The Damodarashtaka says that Ajita is actually conquered by something, an apparent contradiction which teaches so much.

What force do we already know to be undefeated? What is something that we see every day that bewilders us? What takes place that we have zero control over, which we can’t prevent no matter how hard we try? In Sanskrit it is known as kala. Translated to mean “time,” a synonym is “death.” The scientists can today be working very hard to prolong life. This is surely a challenge to the undefeated death. Everyone from the past has died. We know this because they are not with us presently. By logical deduction, we understand that everyone living today will eventually have to die also.

But until that happens, we won’t believe it for sure. If only we can get rid of all diseases, then death will have a difficult time conquering us, no? If only we can find safe situations all the time; then death through accidents won’t happen. Though this is foolish thinking, if we accept the idea then it still doesn’t address the issue of time. Even if death is absent, there is still the changing body. Old age takes place, nonetheless. We can’t get back the body we had as a child. This means that time has already defeated us.

“The Blessed Lord said: Time I am, destroyer of the worlds, and I have come to engage all people. With the exception of you [the Pandavas], all the soldiers here on both sides will be slain.” (Bhagavad-gita, 11.32) 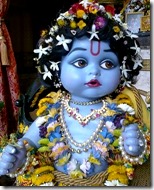 In the Bhagavad-gita, the Supreme Being, known as Krishna, says that He is time. Time is one way to understand Him. The person who insists that God doesn’t exist still understands Him. They know Him as death, or time. They readily acknowledge the influence of time, so this means that to some degree everyone believes in God.

He is known as Krishna because He is all-attractive. Since He is time, He can break its influence. Though He is always with His transcendental form of bliss and knowledge, He can seemingly subvert the influence of time and take on the form of a child. This would be like going backwards for us, whereas for God it doesn’t make a difference. He can change the time continuum and even stop it.

That undefeated person was once bound to a mortar by a loving mother. At the time, He was in a childhood form that was also very beautiful. It had just broken a pot of yogurt in anger. The mother chased after Him, who was her son. By tying Him to a mortar by the belly, the young child earned a new name: Damodara.

The Damodarashtaka celebrates that incident, and in one of the verses it says that God is conquered by bhakti. How can the unconquerable be conquered? The answer is that love and devotion win His favor. By His favor He voluntarily loses. Think of it like the father giving in to the child out of love. Think of it like the head of state reversing an order of punishment made by the courts. 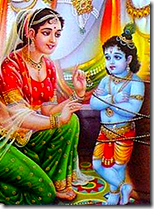 Conquering through bhakti is very important because then even time loses its influence. The highest spiritual land is known as Goloka. There the same Krishna always plays with those who have conquered Him. He goes here and there, and the great enemy known as time has no influence. It does not create old age. It does not bring upon disease. It does not cause depression. Instead, everything remains fresh and new, just like the Damodarashtaka, which sings of the glories of the sweet mother of Vrindavana, who conquers the unconquerable with her pure love.

To clear up confusions any,

In Vedas names for God many.

Among them Ajita is one,

Means that conquered by none.

But in Gokula by Yashoda tied,

Caught though to run away He tried.

To this truth by Damodara treated.