“In charge of the various necessities of life, the demigods, being satisfied by the performance of yajna [sacrifice], supply all necessities to man. But he who enjoys these gifts, without offering them to the demigods in return, is certainly a thief.” (Lord Krishna, Bhagavad-gita, 3.12)

Question: “Listen, bhakti-yoga philosophy is nice and all. I believe in it wholeheartedly, that you should worship God and be conscious of Him from today through the time of death. The thing is, I’m not ready to give up my family life. It is not through attachment, but through respect. Everything I have is due to them. Not just my parents and grandparents, but those who came before them too. I have to set up a good family in order to repay that debt. Does this mean that my devotional service is ruined?”

A person is considered grateful when they acknowledge the good deeds done for them. If someone helps you and you forget about that later on, you are not a grateful person. To be grateful means to be wise, since it means remembering something from the past. The less intelligent not only forget, but they fail to see beyond the immediate vision.

“I am His younger brother, Lakshmana by name. Due to His transcendental qualities, I have taken up service to Him, as He is grateful and very knowledgeable.” (Lakshmana speaking to Hanuman, Valmiki Ramayana, Kishkindha Kand, 4.12)

In the Ramayana, we learn that the Supreme Personality of Godhead is a grateful person. This is confirmed in the Bhakti-Rasamrita-Sindhu of Shrila Rupa Gosvami also. Since He is the most intelligent person, it makes sense that God would remember any work done in His favor. In the Bhagavad-gita He says that a simple offering of a fruit, water, a leaf or a flower is accepted by Him, provided the offering is made with love and devotion.

“If one offers Me with love and devotion a leaf, a flower, fruit, or water, I will accept it.” (Lord Krishna, Bhagavad-gita, 9.26)

The person who remembers what their ancestors have done for them is thus on the right side of things. They are intelligent, grateful and not a miser. From Vedic philosophy we learn that as soon as someone takes birth they assume three debts. There is something owed to the rishis, who pass on Vedic wisdom. Without consulting the works of the rishis, it is impossible to know the five important topics of the supreme controller, the individual soul, the material nature, time and karma. This debt is repaid through studying these works.

Another debt is to the forefathers. The grateful person inherently understands this debt. They took birth due to the work of two people. The credit for the circumstances of their birth belong to generations prior. This debt is repaid through begetting a son. Basically, you’re keeping the chain going. You’re not exploiting the situation that was created for you by someone else.

The remaining debt is to the demigods, who manage the material creation. Lord Krishna mentions this debt in the Bhagavad-gita, where He says that one who doesn’t offer sacrifice is considered a thief. Sacrifice is for the pleasure of these demigods. It is taking the elements of material nature and essentially saying “thanks.” It is rightfully acknowledging that within the hands of any single individual rests very little control over circumstances.

Bhakti-yoga is love and devotion directed to the Supreme Personality of Godhead. Repaying the three debts doesn’t necessarily fall into the category of bhakti-yoga, but service to God Himself automatically satisfies the debts. Why is this true? To think of what the forefathers have done is to see into the past. It is to see beyond what is currently visible. To see what the saints have done is to go even further up the chain of work, and then thinking of the demigods seems to reach the limit.

The Supreme Controller is the origin of all, however. He is the first person in the chain of work. Moreover, through the effortless operation of time, everything will be destroyed going forward. Vision moves forwards and backwards. Time is infinite in both directions, so one who really sees understands both what has happened in the past and what will happen going forward. When everything is gone, only Ishvara will remain. He is God, and He will again populate the earth with creatures, managing controllers, and saintly personalities.

“The whole cosmic order is under Me. By My will it is manifested again and again, and by My will it is annihilated at the end.” (Lord Krishna, Bg. 9.8) 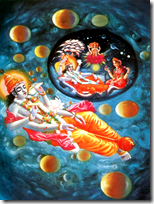 The person who takes up service to Ishvara, who is a personality, is the wisest. They understand the root cause, and so they feel indebted to the right person. To be grateful for the work of others does not mean that the attention is given to the wrong people, but the appreciation is not yet complete. Bhakti-yoga is like watering the root of the tree; everything gets nourished as a result. The nourished roots then satisfy all debts assumed at birth.

The person who takes up service to God thus has no reason to fear. They chant the holy names in full surrender: Hare Krishna Hare Krishna, Krishna Krishna, Hare Hare, Hare Rama Hare Rama, Rama Rama, Hare Hare. They think of God all day, and they follow service to Him through the via medium of the guru, who ensures that the work done is bona fide. Every person within the affected sphere is benefitted, even if they don’t realize it. Even if the demigods should mistakenly feel slighted, Shri Krishna protects, like He did on the occasion of Govardhana Puja.

To demigods grateful should feel,

Sacrifice, else from them to steal.

Rishis and forefathers there are two,

Three debts at birth assumed by you.

But bhakti-yoga to roots nourishing,

No worries then to expect,

Since Krishna there to protect.