Home › spiritual master › Is He Guru Or God

Is He Guru Or God

“When He sees that a conditioned soul is very serious about getting out of the clutches of the material influence, the Supreme Lord gives intelligence internally as Supersoul and externally as the spiritual master, or, as an incarnation of the Personality of Godhead Himself, He helps by speaking instructions such as Bhagavad-gita.” (Shrila Prabhupada, Shrimad Bhagavatam, 3.31.18 Purport)

His Divine Grace A.C. Bhaktivedanta Swami Prabhupada practically dedicated his whole life to fighting against impersonalism, the Mayavada philosophy. His lectures and commentaries are filled with references to the Mayavadis, in excess to the point that one might wonder why such concern is warranted. Why mention another group so often? Besides from how the Supreme Absolute Truth is viewed, how does one distinguish a Mayavadi from a Vaishnava, who worships God as a person? A simple way to tell is from the analysis of the Bhagavad-gita.

Are you worried about death? Are you concerned with what will happen to you after you die? If not for yourself, are you worried about this event happening to others? Experience tells you that it will happen to everyone. Right now there are little miseries here and there. In the spring season, you go out for a relaxing day of golf, or so you think. What you failed to remember is that you have severe allergies to newly grown grass. So your fun ended up mixing with intense misery.

Death is worse because you lose everything. You also don’t know when it will arrive. It doesn’t always give a warning. This means that everything you’re worrying about today could end up being meaningless. Maybe that trip to the bank isn’t necessary. Maybe searching for new cars isn’t the best use of your time.

The Bhagavad-gita addresses death at the very outset. Though viewed as a religious work by the less intelligent, this transcript of a conversation between a student and his teacher presents birth and death as a science. There is a force found within nature that pervades the changes brought on by time. This force exists within all of space; wherever you go. And nothing can eliminate this force, not even death.

The teacher in the Bhagavad-gita is Shri Krishna. He explains the position of the undying force, the spirit soul. It does not take birth. It does not die. Then what are we so worried about? Why does everyone fear the dreaded end of everything? The end relates to temporary things. The beginning is the same way. We come into this world with nothing and we leave the same way. In between we form attachments to temporary objects, and we do so out of ignorance. The wise person knows that these attachments lead to lust, which then give rise to anger. From anger we do foolish things, losing our intelligence. 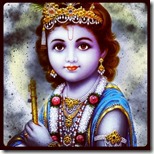 Krishna explains that all living beings are souls. The cat and the human being are alike on the inside. The ant and the elephant are souls too. The differences we see are due only to the body types. Not everyone looks the same and not everyone acts the same. Yet everyone is still the same when you reach down into the essence.

Knowledge of this spiritual science is very comforting. Krishna continues further. He says that the material nature comes into existence through His glance. If we took everything that exists, both material and spiritual, we get a complete whole. That whole is one way to view God. This is basically the impersonal understanding. As spirit soul, you and I are the same. Therefore let’s celebrate our oneness; let’s not fight or compete with each other. Let’s take peace from knowing the undifferentiated spiritual energy that pervades the entire creation.

It should be noted that this viewpoint is completely valid. There is an impersonal aspect to the spiritual science. This aspect exists in fact; no wise person would deny it. Yet Krishna continues further. He says that He is the source of this light of transcendence. From Him has come everything. He does not mention a generic God. He does not advise the student, Arjuna, that any person can become the original. He does not advise Arjuna to repeat to himself daily, “I am He.”

The person who truly understands the Bhagavad-gita accepts Krishna as the Supreme Personality of Godhead. There can be no other conclusion. Anything else is invalid; it is a form of cheating done through envy of the real God. The impersonalist will speculate that Krishna is just a prophet, on the level with so many other important personalities from the past. They will say that He arrived to deliver the message of God, but He is not God Himself. God is an impersonal spirit; He cannot have form.

Krishna says that He arrives on the scene whenever and wherever there is a decline in religious practice and a rise in irreligion. Yet He does not come all the time. The Bhagavad-gita spoken to Arjuna is a special case. In most other circumstances He sends one of His bona fide representatives. This is the equivalent of the prophet idea. The guru is one with Krishna because he has the same interest: to deliver fallen souls. 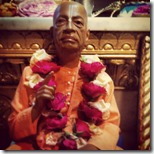 The Vaishnava knows that Krishna is not simply another guru. The impersonalist fails to understand this, and so the benefit they get from the Bhagavad-gita is limited. The Vaishnava understands that Krishna guides from within as the Supersoul and without as the guru. This combination is His special mercy, and it is reserved for those who are genuinely seeking the truth.

To those the Truth genuinely seeking,

A guru coming and wisdom speaking.

Talking of God and chanting His name,

Though one in interest to Him not the same.

Mayavadi the truth of Krishna not knowing,

So from their effort devotion not flowing.

Limited their understanding of Gita to be,

Only light of Brahman the best they can see.