“Intelligence in the mode of passion is always working perversely. It accepts religions which are not actually religions and rejects actual religion. All views and activities are misguided. Men of passionate intelligence understand a great soul to be a common man and accept a common man as a great soul. They think truth to be untruth and accept untruth as truth. In all activities they simply take the wrong path; therefore their intelligence is in the mode of passion.” (Shrila Prabhupada, Bhagavad-gita, 18.31 Purport)

“Do as your heart desires. Reach for the stars. Nothing is impossible if you set your mind to it.” We’ve likely heard a few or all of these words of encouragement before. The idea is to not settle for what you have at the present, especially if you’re doing so out of fear. You should know that achievements are possible, that every great man was once a helpless infant at one point. On the occasion of Vyasa Puja we celebrate the person who tells us the actual truth, that our intelligence in the mode of passion misguides us.

What if what we desire is wrong? What if the objective we’re seeking isn’t good for us? There is still intelligence. There is still hard work. Perseverance is just as important in success for the thief as it is for the policeman trying to catch them. There is intelligence to both piety and sin. In the Bhagavad-gita, we learn that when a person’s intelligence is in the mode of passion, they can’t distinguish between right and wrong.

The two words of significance are adharma and dharma. One is irreligiosity and the other religiosity. The intelligence in the mode of passion should not be difficult to understand. If we want something badly enough, we’ll figure out a way to do it. It is seen that many of those who are in the initial stages of bhakti-yoga ask questions about how to meet the minimum requirement for chanting on their prayer beads when they have so many other things going on. But in actuality, they already meet much more difficult requirements on a daily basis. They go to school and pass exams. They show up to the office. They run a business.

The necessary ingredient is desire. The spiritual master is the mercy of the Supreme Lord since he comes and delivers knowledge on how to purify desire. If we make our objectives pure, then the intelligence will take on the same nature. And what is a pure objective? Isn’t earning money important? Isn’t eating necessary to maintain life? Shouldn’t curing diseases be a top priority?

The spiritual master, also known as the guru, says that the human life is especially meant for tapasya, or austerity. Through regulation in eating, sleeping, mating and defending the living entity in the valuable human form has the opportunity to reach the full potential of consciousness. To be conscious means to live. Dull matter lacks consciousness. The benefit of being conscious is the ability to connect with the Supreme Consciousness, who is also known as God. 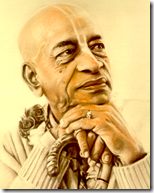 The guru adapts to the time and circumstance and takes all risks in spreading this most important message. His Divine Grace A.C. Bhaktivedanta Swami Prabhupada crossed the ocean on a boat at an advanced age in order to transform the intelligence of others from passion to pure goodness. He accomplished this through speaking of the glories of the Supreme Lord, who is known as Krishna. Prabhupada created an expanded broadcast network consisting of preachers spreading the same message. Mass distribution to effect mass change.

The pure objective is to be in service to the Supreme Lord. Then pure intelligence comes, wherein one can see right and wrong properly. They won’t mistake adharma for dharma. In the case of the democratic style of government, it is very easy to turn something bad into something good. Just get enough votes for your side and you can even turn stealing into a legal act.

Yet all the votes in the world don’t change the fact that stealing is against dharma. Adharma keeps the intelligence in passion, which leads to rebirth. The pure intelligence leads to ascension to the topmost planet in all the universes, where the Supreme Lord in His personal form resides. On the occasion of Vyasa Puja we honor, remember, and celebrate the teacher who shows us the way towards this great destination.

When intelligence in passion to come,

Adharma dharma in mind to become.

Wrong it is for property to steal,

But legal when enough votes to seal.

Through words of guru taking.

Gift of the fixed consciousness bestowing,

By him way to Krishna’s realm showing.