Home › hanuman the messenger › Forgetting the Past

“Alas, the common saying, ‘Bliss eventually comes to a man who lives, even after one hundred years,’ appears to me to be true.” (Sita Devi, Valmiki Ramayana, Sundara Kand, 34.6)

“I’m haunted by the past. My childhood memories come back to me every now and then. I can’t get over my bitterness at my parents. They made so many mistakes. You wouldn’t believe some of the things I had to go through. It has certainly shaped who I am today. No matter what I do, I can’t escape it. I hope that no one has to endure that in their lifetime.”

Such sentiments are not uncommon today, especially considering that modern psychology puts great emphasis on childhood memories and experiences. From studying the bona fide spiritual science, however, we learn that the bad experiences don’t have to be limited to childhood. The time continuum is infinite in both directions, which means that there were previous lives with their own traumatic moments.

What was the outcome? How did those lives end?

The birth from the present life gives an indication of how the previous life ended. As long as there is birth in this material world, there is a hint of sin. A harsh assessment, but one that is true nonetheless. The real definition of sin is doing something the wrong way. A decadent cake is playfully described as “sinful” because eating such rich food is not healthy. It goes against the proper way of living.

Sin of the broadest scope is doing anything that keeps a person away from their original consciousness. Sanatana-dharma describes that original consciousness. It is a duty, an essential characteristic, and it is without beginning and without end. The only consciousness that meets this criteria is service to the Divine. We can’t serve a tree forever. Our family members remain with us for but a short time. Service to the Divine is endless since both the individual spirit and the Supreme Spirit never perish.

As soon as there is a hint of desire to serve anything else, a tainted consciousness if you will, there is birth in the material world. Then, as long as that consciousness remains there is continued rebirth. However the previous existence may have been, at the end there was still a hint of sin; the consciousness was not entirely pure. We did not wish to serve the Divine purely at the end of life.

“Whatever state of being one remembers when he quits his body, that state he will attain without fail.” (Lord Krishna, Bhagavad-gita, 8.6)

That is the bad news. The good news is that we don’t remember the past life. Indeed, so much from this life we forget also. And those traumatic moments from childhood and beyond can be corrected very quickly. The above referenced verse from the Ramayana shows how that can be done. Sita Devi invokes a famous adage, wherein one sees happiness through living, even if that happiness should arrive after one hundred years.

She feels ananda, or bliss, after receiving news of her husband and His younger brother. This is no ordinary news. Rama is the Supreme Lord, an avatara appearing on earth for a specific purpose. Lakshmana is the servitor-God, always acting in Rama’s interest. Sita Devi is Rama’s eternal consort. In their real-life drama called the Ramayana, they teach so many lessons about both material and spiritual life.

In material life we know that happiness comes and goes. Just because we are sad today it doesn’t mean that we will always stay that way. The same applies for happiness. This verse has significance for spiritual life also. Just because we have spent many lifetimes in many species and in different areas, we are not forced to suffer forever. We can get bliss that will erase the effects of all the bad experiences.

That bliss is so powerful that it can change our outlook as well. Just as sometimes we learn later on that a bad experience was actually a blessing, when one finds the supreme shelter of devotional service, they come to appreciate the struggles from the past. They see that all the previous actions in maya, or illusion, now help to affirm the decision to stay devoted to the Supreme Lord in thought, word and deed.

In this example, the ananda came from hearing about God. The news arrived through a devoted messenger, a pure devotee. Our ananda will come in the same way, through a sincere servant bringing news from Vaikuntha, which is the spiritual realm. That place is free of anxieties, and so the same nature gets created when a person hears with attention and respect. 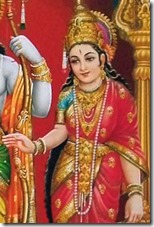 No one suffered more than Sita, as she was harassed day and night by wicked creatures. Those villains tried their best to get her to change her ways, to take to sinful life. She refused, and despite the torment and torture, she received happiness through Hanuman’s words. This means that no matter what suffering we have endured in the past or are currently dealing with, there is a chance for happiness. By the grace of Bhagavan and His representative, the guru, the fortunate soul hears about Rama and turns their life around.

Despite torture and misery earned,

Fortunes through hearing around turned.

Still true in consciousness, in desire one.

So Hanuman to her by Rama sent,

Bliss even though so much trouble spent.