Home › conversations › Talking About The Hanuman Of Other Traditions

Talking About The Hanuman Of Other Traditions

“O King, at that time Arjuna, the son of Pandu, who was seated in his chariot, his flag marked with Hanuman, took up his bow and prepared to shoot his arrows, looking at the sons of Dhritarashtra. O King, Arjuna then spoke to Hrishikesha [Krishna] these words:” (Bhagavad-gita, 1.20)

Friend1: So I saw an interesting movie the other day.

Friend2: You were able to understand? Did it have subtitles?

Friend1: No subtitles, but I was able to get the general idea of what was going on.

Friend2: Was it good?

Friend1: It was interesting for sure. You can tell they took advantage of the popularity of worship of Shri Hanuman. 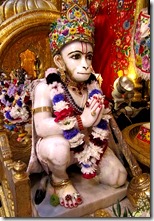 Friend2: It was a religious movie?

Friend1: That’s the thing; it wasn’t. The main character was a self-proclaimed devotee of Hanuman. He would go to temples, make offerings, and recite the Hanuman Chalisa whenever in trouble.

Friend2: I don’t know the Hanuman Chalisa, but every time I hear it I think of Tulsidas. Who could imagine becoming the author of something that famous?

Friend1: This character even paid obeisances to monkeys whenever he saw them.

Friend2: I know what you mean by “self-proclaimed devotee.” They’ll identify as a Hanuman-bhakta, right?

Friend2: I never thought anything of that until I came across bhakti-yoga teachings. Apparently, a true bhakta will never identify himself as such.

Friend2: Yeah; they’ll say that they’re trying to become a devotee or that they’re serving a devotee, following in the footsteps. Not a big deal, but I hadn’t heard that before.

Friend1: That is interesting. As you might have guessed, in keeping with the Hanuman theme this movie had the main character travel into a foreign land to do something important.

Friend2: And I bet that something important had nothing to do with God or His message.

Friend1: Bingo. I mean it was a feel-good movie. The Hanuman-bhakta secretly travelling into Muslim-Pakistan in order to reunite a small girl with her family. She had gotten lost previously and it was a struggle to figure out where she was from.

Friend2: Ah, so they wanted to bring the two faiths together through this story. That’s not a bad message, but not sure why they would need to rely on Hanuman for that.

Friend1: That’s what bothered me. First off, you’re taking Hanuman’s brave journey into Lanka for the sake of Shri Rama, who is God, and comparing it to something material. There is actually no similarity between the two. If the guy was infiltrating another country to preach the genuine message of Godhead, to serve Him in thought, word and deed, then the comparison would fit.

Friend2: Definitely. People often say that about His Divine Grace A.C. Bhaktivedanta Swami Prabhupada. Hanuman crossed the ocean to reach Lanka, where Rama’s wife Sita was being held captive. Prabhupada sailed across the ocean to give the message of Divine love to those who had been held captive by maya, the illusory energy of this material world.

Friend1: This movie got me to thinking. I’m going to run this by you. Hanuman from the Vedic tradition was used in this movie to equate the Vedas with Islam. For analysis purposes, the exact religion on the other side doesn’t really matter. You can substitute any country and religion and have the same kind of movie.

Friend1: So what if things were reversed? Why isn’t there a movie about a devotee of the Hanuman of another religion doing something like this?

Friend2: Not sure what you mean.

Friend1: Well, why not take the devotee of the Hanuman of Islam and have him unite with people from another religion? That could be a good movie too, no?

Friend1: I’m not, but I’m glad you picked up on it. There is no Hanuman of any other tradition, is there? That’s what you were going to say, right?

Friend2: Yup. Not even close.

Friend1: This is how I know that Rama is God. I’m not trying to put down other traditions. This is not a contest of “my religion is better than yours.” God is one. The differences in religion are due to the level of detail in which the Supreme is described. Hanuman is there with Rama. He is known as Rama’s servant. Anyone who is truly devoted to Hanuman accepts Rama as God. More broadly, they accept that the Supreme Lord is a person with identifiable features.

Friend1: Exactly. So there is no reason to bring Hanuman down to a generic level or equate his actions with materially motivated ones.

Friend2: That’s a given. At least one good thing came of you watching that movie. You got a better appreciation for Shri Hanuman and the Vedic tradition to which he belongs. There is no need to go outside. The Bhagavata philosophy, so nicely described in the Bhagavata Purana, is purna, or complete. You study the Bhagavad-gita and you learn everything that’s needed to be known. Even Hanuman is represented; he stands tall in the flag on top of Arjuna’s chariot.

When Bhagavad-gita to recall in mind,

Image of flag of Hanuman to find.

Devotee of Rama, strong and brave,

To Lanka went for Sita’s hopes to save.

Not anywhere else to Hanuman the same,

His association only from Vedas to gain.

Means that tradition completeness to own,

From it know everything needed to be known.