“As a snake captures a mouse or Garuda captures a very venomous snake, Lord Narasimhadeva captured Hiranyakashipu, who could not be pierced even by the thunderbolt of King Indra. As Hiranyakashipu moved his limbs here, there and all around, very much afflicted at being captured, Lord Narasimhadeva placed the demon on His lap, supporting him with His thighs, and in the doorway of the assembly hall the Lord very easily tore the demon to pieces with the nails of His hand.” (Shrimad Bhagavatam, 7.8.29)

The name Hiranyakashipu combines the words “soft cushion” and “gold.” Who wouldn’t want either or both? On daytime talk radio stations, it is quite common to hear commercials for new pillows and mattresses. The advertisements say that these are not like anything you’ve tried before. You’ll sleep much more comfortably. You’ll feel refreshed when you wake up in the morning.

Interestingly, on the same stations can be found commercials for investments in gold. The idea is that no matter the state of the economy, up or down, gold will always be desired. It is a safe investment since people will always want it. The desire for it is so strong that it can lead to great conflict, even in a place ruled by a pious leader. One example is the Syamantaka jewel, which led to the people being suspicious of even Shri Krishna, the Supreme Personality of Godhead.

“The Syamantaka jewel was so powerful that it was daily producing a large quantity of gold. A quantity of gold is counted by a measurement called a bhara. According to Vedic formulas, one bhara is equal to sixteen pounds of gold; one mound equals eighty-two pounds.” (Krishna, The Supreme Personality of Godhead, Vol 2, Ch 1) 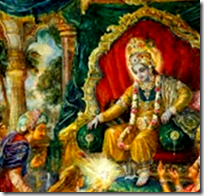 Hiranyakashipu is the name of a famous Daitya, which is a specific kind of asura. Asura is the Sanskrit equivalent for the term “atheist.” If considering him an actor on a stage, when judging the performance Hiranyakashipu would win an Oscar. He was the best atheist. He was even addressed as such by his pious son, Prahlada Maharaja. The boy once called him asura-varya, which means “best of the atheists.”

“Prahlada Maharaja replied: O best of the asuras, King of the demons, as far as I have learned from my spiritual master, any person who has accepted a temporary body and temporary household life is certainly embarrassed by anxiety because of having fallen in a dark well where there is no water but only suffering. One should give up this position and go to the forest [vana]. More clearly, one should go to Vrindavana, where only Krishna consciousness is prevalent, and should thus take shelter of the Supreme Personality of Godhead.” (Shrimad Bhagavatam, 7.5.5)

This king from an ancient time indeed loved gold and soft cushions. He did not like the Supreme Lord, though. He considered God to be the greatest enemy, someone standing in the way of his enjoyment. Nevertheless, through playing his role perfectly, the infamous leader actually praised God tremendously. His example lends great support to the cause of love and devotion, pure bhakti.

1. He asked for the greatest security from death

His Divine Grace A.C. Bhaktivedanta Swami Prabhupada says that the atheists also believe in God. Even if they fail to acknowledge Him during life, they will nevertheless see Him at the time of death. They will be forced to bow down, to submit to a higher power. They won’t be able to recognize Him. The extent of their theism will be the respect they will be forced to pay to kala, which is known to be the great subduer.

“Among the Daitya demons I am the devoted Prahlada; among subduers I am time; among the beasts I am the lion, and among birds I am Garuda, the feathered carrier of Vishnu.” (Lord Krishna, Bhagavad-gita, 10.30)

Afraid to meet God in that form, the atheist tries their best to extend life. They want to remain enjoying in the material world for as long as possible. There is no need to theorize on what potential is there for progress in this area through scientific research and technology. Just look to the example of Hiranyakashipu. He had the best security from death a person could think of.

Of course, he asked for immortality first. This was the request made to the devata Brahma, who is the creator. Brahma doesn’t have immortality for himself, so he very well can’t offer that benediction to anyone else. Hiranyakashipu then asked for security from death in so many different ways and situations. He wanted that no animal or human being could kill him. No weapon could be the cause of his death. He wouldn’t die during the daytime or at night. Neither on the ground nor in the air would be the place of his death. Brahma granted all of these boons. Hiranyakashipu thus had the best security against death a person can imagine.

2. He had everyone living in fear of him

Despite getting these boons, there is always a chance something can go wrong. You live in a safe neighborhood, but installing an alarm system in the home is still a good idea. You just never know what might happen. Hiranyakashipu terrorized the entire world. Though he knew no one could defeat him, he made sure that they knew it as well. In this way, he got something highly coveted: fear from the entire world.

The atheist works towards this goal. There is no other reason for amassing tremendous wealth or extending the boundaries of a nation. The objective is to rule the entire world, or at least wield enough influence so that no one can tell you what to do. Hiranyakashipu had this.

3. He showed that devotion cannot be stopped

The whole world feared him, from the biggest leaders to the smallest. Yet a five year old boy living in his own kingdom was not afraid at all. This was Hiranyakashipu’s son. Named Prahlada, despite being born in a Daitya family he was pious since birth. In the Bhagavad-gita, Shri Krishna compares Himself to Prahlada. Since Prahlada is a devotee, his behavior is merged with God; the interest is the same.

It is one thing to say in theory that devotion to God cannot be checked by outside forces. It is one thing to promise to people that if you are sincere in your desire to be conscious of the Supreme Lord He will arrange for that consciousness to remain. It is another to prove these truths in real life. Hiranyakashipu gives the best support to these claims, for he applied tremendous force to thwart devotional activities.

He was so against Prahlada’s devotion that he tried to have the boy killed. The king had to employ various means because each attempt failed. The king who was practically bulletproof and feared around the world couldn’t stop an innocent and otherwise helpless five year old from practicing his desired occupation: devotional service.

4. He came up with the best arguments for atheism

When Prahlada couldn’t be killed, Hiranyakashipu thought that maybe the boy had acquired a mystic perfection from a demigod. The king was powerful through the grace of Brahma, after all. When the king asked his son where this potency was coming from, the boy replied that the source of his strength was the same as that for the father. In fact, every living entity has the same strength residing within them.

“Prahlada Maharaja said: My dear King, the source of my strength, of which you are asking, is also the source of yours. Indeed, the original source of all kinds of strength is one. He is not only your strength or mine, but the only strength for everyone. Without Him, no one can get any strength. Whether moving or not moving, superior or inferior, everyone, including Lord Brahma, is controlled by the strength of the Supreme Personality of Godhead.” (Shrimad Bhagavatam, 7.8.7)

Hiranyakashipu thought this was silly. Thinking that since he could not see God it meant that God was not indeed everywhere, the father mocked the son. He put forth the best arguments for atheism. He sarcastically asked if God was in the nearby pillar, since God would have to be there if He was all-pervading, as Prahlada had claimed. Sure enough, the Supreme Lord in the flesh, God the person, then emerged from the pillar. He negated the best arguments put forth by the king of asuras.

5. He allowed God to exploit a one percent weakness

Hiranyakashipu was ninety-nine percent safe from death. Though he didn’t have immortality, the vulnerability was small. The Supreme Lord needed just one percent to take care of what was necessary. In this way Hiranyakashipu offered the greatest praise one can imagine. Through his enmity towards the lord of Prahlada’s life breath, through his staunch atheism, through his wanting protection in a temporary and miserable land, Hiranyakashipu gave the best support to the argument that God is indeed everywhere and more powerful than anything we can imagine.

The form of the Lord that appeared from the pillar is known as Narasimha. It is a half-man/half-lion. It roared ferociously, raging in anger at the despicable father and king. Narasimhadeva took Hiranyakashipu on His lap and bifurcated the king using just His nails. The king’s death thus did not violate any of Brahma’s boons. The death occurred on the lap, which is neither in the air nor on the ground. It occurred at dusk, which is not the daytime nor the night. The nails are not a conventional weapon in conflict. Narasimhadeva is neither a man nor an animal.

The person who Prahlada worshiped constantly needed just a tiny defect to gain the upper hand. Hiranyakashipu and other atheists can’t see that the small window of opportunity is actually quite large. Time is the great subduer because nothing can defeat it. Only the Supreme Lord can allow something to stay forever. In the Bhagavad-gita He tells Arjuna to boldly declare that the devotees never perish. They may appear in different forms and come and go from this world, but their devotion remains forever. Not even the best atheist can stop them.

Since of asuras the best,

Though atheist in mind,

Praise through him to find.

Since protection from in so many ways gained,

Safe in air and land, to highest stature attained.

Everything lost through Narasimha adroit,